LAST YEAR, I learned something kind of crazy that I never knew before. A gentleman came to my office complaining that five police officers had recently materialised at his front door, without warning or invitation, wanting to conduct a psychiatric assessment on him. It all sounded more than a little bit bizarre to me, but, since the gentleman appeared otherwise quite lucid, I tried to dig a little deeper in the hope of understanding what it may be all about. He didn’t really know. The best he could tell me was the officers concerned were apparently attached to something called the "Fixated Persons Unit".

I kept digging, and eventually discovered that, according to my client, he had recently made a number of official complaints about the behaviour of a certain public servant who he contended had been abusing his powers in the line of duty. It still didn’t seem to make much sense to me until I went looking for the so-called Fixated Persons Unit. I was somewhat surprised to find that, in fact, it’s actually a thing.

According to the official brochures, the Queensland Fixated Threat Assessment Centre (QFTAC) is an agency staffed by Queensland Police officers and clinicians from the Queensland Forensic Mental Health Service to identify people who are thought to “fixate” on government officials and other public identities.

We have long had laws to address threatening behaviour, stalking, peace and good behaviour breaches and apprehended violence, but this, it seems, is something else again. Apparently established by Campbell Newman’s Liberal National Party Government in 2013, the agency receives information from the Queensland Police Service, law enforcement agencies, ministerial and electoral offices, and other government bodies about allegedly fixated persons, with a view to 'intervening before they escalate to harmful behaviours'. Don’t ask me precisely what that all entails, but the brochure includes benign references to 'proactive rather than reactive' home visits and weekly reviews, all on a strictly 'need to know' basis. Thank goodness, the QFTAC assures us, all this is not just a means of locking away political agitators and the agency has no interest in people who merely hold dissident political opinions. 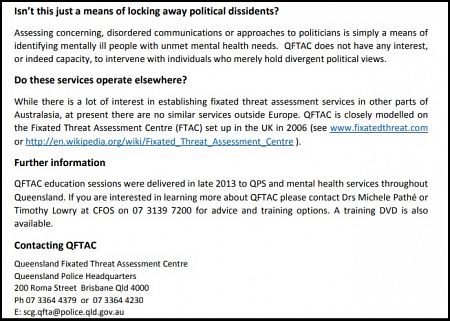 Still, I am somewhat surprised the initiative hasn’t been the subject of more strident public scrutiny and debate, particularly given Queensland’s chequered history of past proactive police security operations. The infamous Queensland Police Special Branch was established in the 1940s to monitor German and Japanese subversives during World War II, but 30 years later it was broadly accused of doing the back-door bidding of the Bjelke-Petersen State Government, investigating and harassing political opponents, dissidents and protestors. It was ultimately disbanded in 1989, following the recommendation of the Fitzgerald Inquiry into Police Corruption, after it (perhaps tellingly) destroyed all its records rather than allow them to fall into the Inquiry’s hands.

Proactive intelligence agencies undoubtedly have their place, particularly in an ever-more-sophisticated world of anti-government activity. But so, of course, do concepts of open government, transparent and accountable law enforcement and the right to dissent.

Unfortunately, the online QFTAC brochure is long on why “fixated persons” must be monitored, but regrettably short on whether – and, if so, how – its own activities are. With no mention of any kind of public interest monitor, we’re left to wonder just precisely who is fixating on the people fixating on the fixated people.

Chris Nyst is a Gold Coast lawyer, novelist and filmmaker. This story was originally published on the website of Nyst Legal and has been republished with permission.

Ex-Origin Energy executive & whistleblower Fiona Wilson was detained by the Queensland Fixated Threat Assessment Centre & injected against her will & without any charges.
Fiona is appealing this & needs a barrister to represent her in court.

14 April 2018, 8:00am A secretive branch of the Queensland Police has Big Brother's shadow looming over ...
Join the conversation
comments powered by Disqus
News updates