THE Queensland Council for Civil Liberties (the QCCL) is a non partisan organisation, which has as one of its objectives the education of Queenslanders about their human rights and civil liberties.

In 1983, I learned a number of things about politics. One of the most important was a lesson that I was taught by Terry White, which is that civil liberties issues are not on the radar when most people go to vote. The reality is that most election campaigns are about the “hip pocket nerve” issues, to borrow a phrase used by Ben Chifley.

However, this election should be about civil liberties for two reasons. The first is the behaviour of the current government in its last term of office.

As a conservative Government, you might think the LNP would look favourably on liberties for which men and women have given their lives over centuries.

The other reason civil liberties ought to figure is that this year will mark the 800th anniversary of Magna Carta. In amongst dealing with weirs on the river Thames and the Medway, that document established for the first time in the English speaking world (though the people who negotiated the deal were probably speaking French) that rulers are subject to the law and that citizens are entitled to the protection of the law so that they cannot be deprived of their liberty without due process.

The QCCL wrote to each of the seven registered political parties participating in this election and sought their views on ten issues. Only four of the parties had the basic good manners to respond. They were Family First, The Greens Party, the LNP and the Labor Party — although we did not receive the LNP response, dated 23 January 2015, until 27 January 2015.

I set out below the questions and the answers in summary form (some of the answers have an explanation and the full answers can be found on our website, www.qccl.org.au):

Labor will not repeal bikie laws immediately and are not saying what they will be replaced with #qldvotes http://t.co/Di1p6IyQXK

How can she justify keeping laws she has described as unworkable? These are laws which in our view strike at the heart of long established civil liberties.

As I have already said, the QCCL is not a partisan political organisation. We leave it to your judgment to determine how to cast your ballot and hope the answers the parties have given will assist you in doing so.

It would be nice to think that at least some people when they exercise that most precious right, the right to vote, will have in their minds not just that very important issue of who best will manage the economy but also who will best respect the institutions that are fundamental to our way of life as free citizens namely the rule of law and due process.

The facts on bikie laws and crime in Queensland and not the spin http://t.co/tPEMqJaZbT via @ConversationEDU 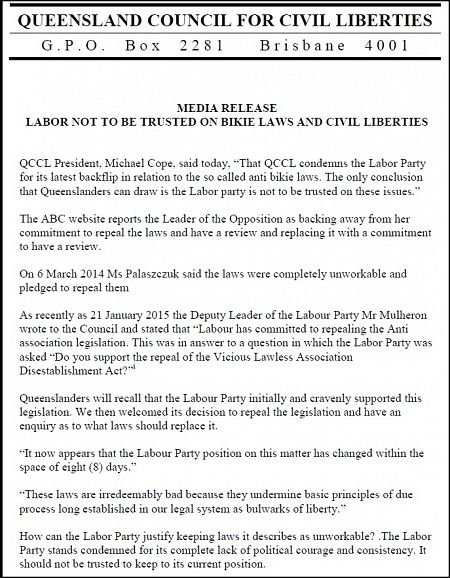 No case for four-year term for Queensland parliament

17 March 2016, 7:30am On 19 March, Queenslanders will vote whether the state government should run for ...
Join the conversation
comments powered by Disqus
News updates