Wilson Security: Working hand-in-hand with – and protected by – Government

Apparently, writing ‘WILSON: Human Rights Abusers’ in chalk on a glass window is seen by the courts as "offensive defacement" and will cost you $500. Gaye Demanuele reports.

According to the Melbourne Magistrates’ Court, the writing of ‘WILSON: Human Rights Abusers’ in easily removable liquid chalk on a glass window of a Wilson Security building is “offensive”.

It’s offensive nature is deemed to be “defacement” that is worth $500. Well, $300 on review by a magistrate, who advised compliance to “lawful” means of protest. They also recommended not using other protest methods if one is too poor to pay $500. An apology to Wilson Security is required by the court to avoid a conviction for “defacement” being recorded against my name.

Precisely, it is the material words that are judged as being offensive. Meanwhile, the actual Wilson Security staff who allegedly committed human rights abuses against asylum seekers held in Australia’s immigration prisons on Manus Island, PNG, and Nauru remain unaccountable and at large. They continue to act with impunity as they collect their considerable salaries paid for with our tax dollars. Wilson Security, along with other government contractors, including Broadspectrum (owned by Ferrovial), G4S, Serco, IHMS, Toll Holdings and others, continue to profit on the bodies of asylum seekers. It seems that the Court would rather not hear about any of that. Peter Dutton, Minister for Immigration and Border Protection, and his government, would rather you didn’t.

The Court Registrar called me “The graffiti artist”. I’m flattered, mind, but I can make no claim to that moniker. I am, however, a person who believes in acting for social justice. In our increasingly dystopian society, caring about fellow human beings is viewed as being dysfunctional; we are encouraged to look the other way when faced with acts of injustice. Preferably, our sight should be aimed at screens that promote acquisition of consumer goods and hatred of the constructed “other”. The dominant voices of the media claim false equivalency between those who promote hatred and those who uphold human rights. So called “social justice warriors” are derogated as people to be scorned. Lawyers who represent asylum seekers for free are “un-Australian”.

What am I sorry about?

I’m sorry about the conditions that led up to this act of alleged defacement and that continue beyond it. Conditions as perpetuated by our government on a foundation of over two centuries of racist colonisation and dispossession of Aboriginal people’s land and lives. Such institutionalised racism that results in poorer health and educational outcomes, lower life expectancy, poverty, child removals and the disproportionate incarceration of Indigenous Australians. The same now unofficial “White Australia” policy that transfers across to the demonisation, criminalistion, imprisonment and deportation of asylum seekers.

I’m sorry that all the petitions, letters to our elected representative, email campaigns, peaceful rallies and candlelight vigils have not stopped the deaths of asylum seekers held as political hostages in Australia’s detention centres. Those lawful actions within the “right to protest” corollary did not stop Wilson Security staff allegedly sexually abusing, assaulting and traumatising people who sought Australia’s asylum, as is those asylum seekers' right under our international obligations. Senate enquiries have not changed the policies, nor has a class action compensation claim in the Supreme Court.

In fact, conditions are worse with the Manus prisoners denied basic rights, including access to water, in the Lombrum camp. They are about to be abandoned in Australia’s client state of Papua New Guinea come 31 October. The people imprisoned in Nauru are punished for  peaceful protest, including the children. Dutton has targeted people in community detention onshore by the withdrawal of meagre financial support and accommodation, issuing them with a “final departure” visa . (No, that is not a Nazi classification from the 1930s,although Goebbels would surely be proud.) These people live in fear that at any time they could be rounded up by Border Force to be detained in preparation for deportation. For those detained in immigration prisons onshore, Border Force is now applying visiting restrictions.

The Department of Immigration and Border Protection has an allocated annual legal budget of $71 million (now blown out by the Manus class action case) and spends over $8 million per year on a media unit with a staff of 82. Dutton has extensive resources at his command. When his department is challenged in court, the standard response is to introduce new legislation which renders the court decisions void. Wilson Security and Wilson Parking, owned by the Kwok brothers, hold lucrative contracts with the Federal and state governments despite the fact that they are unable to meet codes of ethics and conduct on two fronts: they profit on the refugee detention-industrial-complex, and they are embroiled in corruption scandals and tax evasion. In addition, Wilson Security is the contractor for guard services for the Australian Taxation Office and the courts — government and big business, hand-in-hand protecting profit at the expense of the rest of us. Together, they render all “lawful” avenues ineffectual.

So what are people of good conscience to do when “lawful” actions to stop human rights crimes have been exhausted? We must recognise that what a government is allowed to get away with against one group of people it will eventually use against the rest of us. This knowledge unites all of us with a common cause. The tradition of shared struggle against oppression shows us that change for the better is driven by the people and is not often achieved by the oppressor’s approved and sanctioned methods. It is easy for the police to arrest one protester, 50 a little more difficult, but hundreds and thousands of people united in direct action, clogging up the police cells and courts becomes too onerous. Politicians afraid they will lose votes start to pay attention. When we dismantle the profit and self-interest motives that bolster Australia’s cruel immigration policies, we will change them. There is no time to waste.

What am I not sorry for?

I am not sorry for taking action to alert the public of human rights abuses committed by Wilson Security, under the remit of our government, paid for with our tax dollars.

I am not sorry for encouraging the public to boycott Wilson Security, Wilson Parking, Wilson Storage and Wilson Medic One — big business listens when its profit margin is threatened. The incarceration of asylum seekers and refugees should never be a business model. 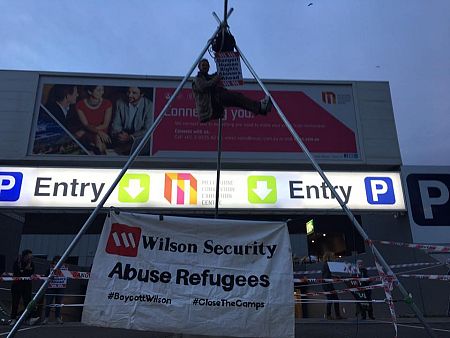