Mission for a Cause to aid Melbourne's homeless

Every Monday night, charity group Mission for a Cause feeds those who have fallen victim to Victoria's social challenges. Joanna Maidment spent a night with those who need help, as well as those who give it.

MY PHONE PINGS. It’s a message from Leigh Johnson, a woman I went to high school with in Dandenong three decades ago. We were not really mates, but she came across me on Facebook and is wondering what I’ve been doing with myself. She has set up a not-for-profit and has been feeding 400 people every week on a Monday night at the Queen Victoria Market.

I promise to help and a couple of weeks later, I make my way to the corner of Franklin and Peel streets in Melbourne to find a long row of trestle tables stacked with bread rolls, cans of drinks and trays of food covered with aluminium foil. People bustle on one side of several smoking barbecues while an orderly queue forms on the other.

At the head of the queue next to a table piled with paper trays, serviettes and plastic cutlery, is a large man in an electric wheelchair. He has a massive beard and an arm in a sling. He reminds me of Santa Claus, except he’s not dressed in a cheerful red outfit. Melbourne’s top temperature that day reached a maximum of ten degrees and it would dip to zero that night. It rained all day. Older men and women or those with visible disabilities are up the front.

Burnice, or “Mama” as everyone calls her, shows me to a table where I’ll be serving a meat bake. I wear a mask, as does the woman next to me. “Serve one spoon full, we must make sure everyone gets a portion. Don’t give out seconds until everyone in the queue has been served.” The bodies behind the trestle tables work in unison, like a well-oiled machine. Some, like me, are new volunteers, others are regulars. It immediately feels like a family.

Next to me, barbecues are fired up, refrying chicken pieces, burgers, and sausages. On the other side of the barbecues are tables with bread rolls, mashed potatoes, dahl and rice. There is a coffee van with hot beverages and doughnuts. There is Mama, John, Annette, Belinda, Khalil, Franca, Rachael and her son, whose name I don’t catch. I don’t catch many names of the volunteers because the effort to coordinate serving hot food to 400 people from a temporary kitchen is mindboggling and right now heaving, flowing and ebbing organically, directed by sheer human need on both sides of the tables.

Finally, everything is set and at six o’clock, it’s time. A wave of people starts to step along the tables, each holding a paper tray with little compartments for different dishes. Stepping past each table, they survey, often with trembling hands, the table’s offering. The woman next to me is serving a vegetarian lasagne. It smells divine, but there are only a few takers because most want meat. They want protein as it provides more lasting sustenance and calories to keep them warm.

But many also want the loose green salad — “just a little, in the corner, please leave room for the barbecue stuff”. Most people have a system of how they want the food served onto their trays. They know what works and how they like it. I try to plop the meat pasta bake and a bit of salad onto their plates in a way that respects their preferences. They smile.

One young man, another John, tells me he is a big fan of Scooby-Doo. He is here every week. He tells me he is building a caravan for Leigh so that she can serve hot food to people from lots of different places. He tells me Leigh is a saint, as is her family. They make a difference; they are loved.

The wave moves for an hour, steadily, patiently. No one pushes, no one cuts in and there are no disagreements. I don’t see this much mutual care and respect between people at my local supermarket in the well-to-do eastern suburb I live in. I don’t have much time to lift my gaze or to make eye contact with the people trailing past me, or maybe I’m too ashamed to.

Too ashamed to look at the faces we fail; I fail; this city fails.

There is warmth in the voices across the table. Warmth and dignified kindness in the “yes, please” and “thank you”. It brings tears to my face, which I hide behind the surgical mask. There is no need for me to cry; the people on the other side beam at me, they crack jokes. Some are silent, others tell little anecdotes about themselves. “I used to work for Centrelink,” says one man, who has migrated to Australia from India.

Another, in a helmet and rolling a bike along, tells me he is a vegetarian who doesn’t eat carbs. “No rice, no pasta, no meat.” His face is gentle and engaging, the face of a teacher, I think to myself. I serve him the green salad and make a note to bring cooked vegetables next time.

The people moving past the tables are of all shapes, colours, ages, ethnicities, religions, sexual orientations, genders and backgrounds, each no doubt with a life story worth telling. Most are men over 50, but there are women, too. Annette, John’s wife and another key conductor of the action, points to one older lady — “It breaks my heart to see a woman her age here. She wears the same clothes every winter. How did it come to this? How are we letting this happen?”

Annette turns away from me because even though she has been here from the beginning of Mission for a Cause, some things never get easier to accept. I am told that for most, this will be the only warm meal they will have this week.

Leigh tells me that it takes six days a week of preparation. That Mission for a Cause feeds up to 400 people every week, which costs $500 for containers, cutlery and equipment hire, the rest coming from food donations from many iconic Melbourne food and charity institutions. Over the last year, they have served around 25,000 hot meals, during a time people in Melbourne have been smashed by the pandemic, lockdowns, lack of housing and soaring costs of living.

Leigh says we all know that housing is only one piece of the challenging puzzle that contributes to homelessness, but we really need wrap-around services like employment, education, health, domestic violence and most of all, mental health, including support for drug and alcohol addictions:

“My ultimate goal is to create a proper shelter, where people can come to rest, have a meal, have a shower and just do the things that we often take for granted.”

Unwaveringly, Mission for a Cause will be there next Monday, as they have been for the last few years, week in, week out, humbly serving people on the other side of the tables who, with quiet dignity and graceful spirit, remind us all what it should feel like to be human.

To support or donate to Mission for a Cause, go to their Facebook page and GoFundMe page.

Joanna Maidment is a creative writer who lives in Naarm/Melbourne. She has qualifications in health promotion and community development and has worked in cancer prevention, Aboriginal heart health, suicide prevention and disability support. You can follow Joanna on Twitter @MsJMaid. 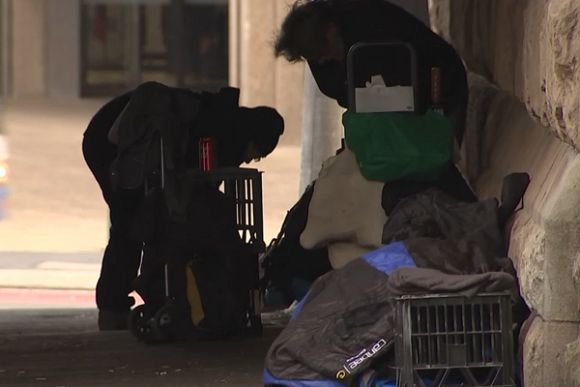 The lives of van dwellers as portrayed in the film Nomadland provide a reminder of our government's ignorance towards the homelessness crisis.

Mission for a Cause to aid Melbourne's homeless

26 August 2022, 12:00pm Every Monday night, charity group Mission for a Cause feeds those who have fallen ...
Join the conversation
comments powered by Disqus
News updates