AUSTRALIANS ARE generally lucky when it comes to the air.

We have big skies, easy breathing and safe planes.

Our planes take off and land, and routinely relocate us for holidays, family re-unions and commerce.

It is a world away from many other peoples’ experience of the sky as a hostile space that threatens rapid and remote destruction, and death.

For most of us, the closest we get to this all too common global reality is TV news footage of wailing sirens and survivors amid the rubble.

But such vision is unlikely to be on the big screen at Avalon this week.

Avalon enthusiastically positions itself as Melbourne’s "other" airport. In reality, it’s a place where not a lot happens.

Every day, there are roughly equal numbers of Jetstar services and bewildered backpackers wondering how far they are from the MCG (about 60 kilometres).

Except for every second year, when the windswept paddocks between the open range Zoo and the closed range prison complex hosts a truly perverse family feel good celebration of the technology that makes many families feel bad – or not at all – in other parts of the world. 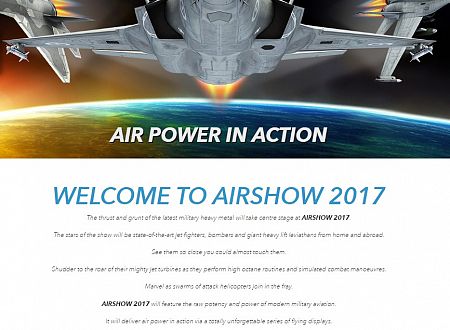 If websites could get breathless this event’s would need a respirator:

AIRSHOW 2017 will feature the raw potency and power of modern military aviation. The thrust and grunt of the latest military heavy metal will take centre stage. The stars of the show will be state-of-the-art jet fighters, bombers and giant heavy lift leviathans from home and abroad. See them so close you could almost touch them. Shudder to the roar of their mighty jet turbines as they perform high octane routines and simulated combat manoeuvres. Marvel as swarms of attack helicopters join in the fray.

Oh, and it’s free for the under fives and there’s plenty of parking!

Avalon airport has a long-standing military connection. Currently owned by the Linfox group the strip was first used by federal agencies 65 years ago as the site for the development of the RAAF’s Canberra bomber.

Over the course of the week long event, around 200,000 people are expected to join air force representatives from Australia, France, Japan, Singapore, the UK, Canada, New Zealand and, of course, the US to ‘feel the power’.

Behind the disturbing images exhorting civilian families to bring their loved ones to the new Colosseum is a far more deeply disturbing trend towards uncontested war planning, spending and legitimising.

The sponsors of the event include the Federal and state governments, along with a who’s who of arms corporations.

BAE and Raytheon are giving away show bags, while nuclear weapons heavyweight Lockheed Martin will no doubt be spruiking its controversial new relationship with Melbourne University.

Students up in arms about US missile-maker's university lab https://t.co/qDBgiGZP4p via @theage

General Atomics, a shadowy group that has a finger in poisoned pies from drones to uranium mining in South Australia, is hosting the reception at the U.S. pavilion. Northrop Grumman, which has a cyber division that boasts of being able to "project force" globally is another of the cash-splashers.

And these corporations have cash to splash.

In 2015, the leading U.S. arms corporations generated more than $US200 billion.

A recent analysis by the International Institute for Strategic Studies shows with an annual spend of around $600 billion the U.S. is home to 40 per cent of the entire globe’s annual military outlay.

And with the new U.S. President planning a "massive" military budget increase and trumpeting "peace through strength", these are good times for the MBA heavy masters of war.

But there are big questions that should be ventilated, along with the jet fuel and av-gas.

With the state governments of South Australia, Victoria and Queensland all touting for contracts, what is the role of the defence sector? Should Australian academic institutions enter into commercial-in-confidence research arrangements with corporations that trade in weapons, including nuclear weapons? Why is Australian defence spending growing and who are we protecting – and from what threat – with our $20 billion plus annual spend? And how can the event’s organiser, Aerospace Australia Ltd, be a registered charity?

Alongside the warplanes, it’s time for some plain truths and some "full throttle" answers.

Dave Sweeney is the nuclear free campaigner with the Australian Conservation Foundation. You can follow him on Twitter @nukedavesweeney.

We could declare Aust neutral & not spend a cent on war toys. What sort of country could we be then? https://t.co/vRUZWuF7Bf via @theage