Geologist and former professor of mining geology, Ian Plimer, has undermined climate change science in the pages of The Australian, writes Graham Readfearn.

BECAUSE MOST OF US aren’t trained as oncologists or meteorologists, we tend to do the sensible thing and rely on those folk for facts on cancer or the weather.

It’s likely, too, that we’d act on their advice by seeking treatment after a diagnosis or packing an umbrella (or, if you’re in dangerously hot Australia right now, have a plan to stay cool).

What should follow, of course, is that policy-makers (and the rest of us) act on their advice.

This is why climate science deniers and fossil fuel interests have tried so hard and for so long to convince the public that the consensus isn’t real.

When researchers a few years ago looked at more than 200 opinion articles by conservative columnists, they found that their most popular argument against climate action was that there was no consensus.

Credit where credit is due to @australian for publishing this excellent rebuttal to the RW go-to 'scientist' Ian Plimer. Plimer’s polemics miss the point https://t.co/Qw81w8LaDn

The latest attempt to undermine the consensus came from the hand of mining industry figure and geologist Ian Plimer in the pages of the Rupert Murdoch-owned The Australian newspaper. The clear errors in the article should embarrass any editor who printed it.

‘It is often claimed that 97% of scientists conclude that humans are causing global warming. Is that really true? No. It is a zombie statistic.’

The Australian describes Plimer as an “emeritus professor”, not bothering to say that he sits on the board of several mining companies owned by Australia’s richest person, Gina Rinehart (who is herself a key funder of climate science denial efforts), including Queensland Coal Investments.

So when, in his critique, Plimer complains about a lack of dispassionate and independent analysis of the climate consensus, we should perhaps bear that in mind.

Of the best known six studies documenting the scientific consensus, Plimer chose to attack two. He employed classic climate denialist tactics of ignoring contrary evidence, while cherry-picking and misrepresenting the facts under his blurred gaze.

No mention of Ian Plimer is complete without highlighting the contradictions he managed to make within just a few pages of his book!https://t.co/N7Ra8SBDAj pic.twitter.com/HUywIyt2Vi

Let’s have a close a look at a master cherry-picker in action.

‘The 97% figure derives from a survey sent to 10,257 people with a self-interest in human-induced global warming who published “science” supported by taxpayer-funded research grants.’

He doesn’t say so, but Plimer is referring to a 2009 paper by Peter Doran and Maggie Kendall Zimmerman of the University of Illinois at Chicago, who looked at the 3,146 responses to a survey of earth scientists.

This is how Plimer characterized the survey:

Replies from 3,146 respondents were whittled down to 77 self-appointed climate “scientists”, of whom 75 were judged to agree that human-induced warming was taking place. The 97% figure derives from a tribe with only 75 members. What were the criteria for rejecting 3,069 respondents? There was no mention that 75 out of 3,146 is 2.38%.

Plimer asks what the criteria were for rejecting 3,069 respondents. The actual answer is that there were no criteria because they were not rejected. His 2.38% figure is pure fiction.

@RossAndJohn @3AW693 Ian Plimer is a climate change sceptic who makes claims which are simply not supported by the data  https://t.co/45FZKPvUvM

Across all 3,146 responses, Doran and Zimmerman found that 90% of respondents thought global temperatures had risen since the industrial revolution, and 82% agreed that “human activity is a significant contributing factor” to those changes.

But remember that their survey targeted “Earth scientists” which not only includes climate science, but also other disciplines like geology (Plimer is a geologist) and geochemistry.

What Doran and Zimmerman found was, not surprisingly, that among the subset of 77 climate scientists that completed the survey, only two did not agree that human activity was a significant contributing factor to rising temperatures.

In short, Plimer misrepresents the survey and what it found and ignores the facts that would neutralise his own argument.

Next, Plimer discusses a study led by Dr John Cook, now at George Mason University but formerly of the University of Queensland.

The research, carried out by Cook and members of his Skeptical Science team, examined 11,944 climate change papers between 1991 and 2011.

Cook wanted to know how many scientific papers accepted the premise that most global warming was caused by human activity. Only 78 out of 11,944 studies – or 0.7% – were explicit in rejecting that, against 3,896 that endorsed it. 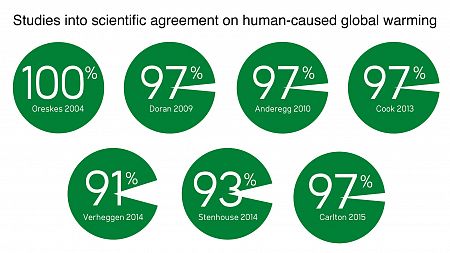 Image via Skeptical Science, CC BY 3.0

After quoting from the methodology section of the paper, Plimer’s breathless criticism of Cook’s paper went like this:

This study was a biased compilation of opinions from non-scientific, politically-motivated volunteer activists who used a search engine for key words in 11,944 scientific papers, were unable to understand the scientific context of the use of “global warming” and “global climate change”, who rebadged themselves as “citizen scientists” to hide their activism and ignorance, who did not read the complete papers and were unable to evaluate critically the diversity of science published therein.

If Plimer had read the methodology section of Cook’s paper in the journal Environmental Research Letters, then you might wonder why he didn’t bother to inform the readers of The Australian of a key aspect of the study.

‘What was inspected? By whom?’ Plimer asks. Well, let’s answer the question.

In an email, Cook explained:

Virtually every criticism of our 2013 consensus study ignores the fact that we invited the authors of the climate papers to categorise their own research. Some 1,200 scientists responded by categorising their own studies, with the result of 97.2% consensus.

Why does Ian Plimer and every other critic of our work ignore this result? They ignore it because the author-ratings invalidate just about every criticism of our paper.

A straw-man is always easier to attack than the real person, or in this case, the full study.

Plimer claims that another “scathing critical analysis” of Cook’s paper, by a group he describes as “real scientists” had also found fault with Cook’s methods.

Maybe you can ask this charlatanhttps://t.co/yzJ9ZHYUPt

What a fraudulent disgrace to the human race this piece of garbage is.

Anyone familiar with the “scathing critical analysis” that Plimer cites would know it was largely lifted from a blog post by Christopher Monckton. This is the same person who proposed the conspiracy theory that we created the journal Environmental Research Letters just so that we could get our paper published (which gives me way too much credit, there is no way I'm so forward-thinking that I'd create a journal in 2007 just to publish a paper in 2013).

We responded to Monckton's critique back in 2013. Basically, Monckton employs misleading number juggling to convert the 97% consensus to 0.3% consensus. This is brazen gaslighting. It's important to remember that my study is not the only research finding 97% consensus. It's not the first study (Peter Doran holds that honor in 2009). It's not even the second study (Bill Anderegg in 2010). Nor was our 2013 study the last to find 97% consensus (Stuart Carlton in 2015). Multiple studies, using a variety of independent methods, all find 97% agreement among climate scientists that humans are causing global warming.

Cook did get a short response published in The Australian’s ‘Letters to the Editor’ page, alongside other letters congratulating Plimer for his “excellent” article.

Another commentator in the Murdoch stable, Andrew Bolt, was also gushing:

Not very discerning, those folk in the Murdoch media stable.

Plimer is wrong often...is it lies or is it just foolishness?https://t.co/9pphNAOGOA

This article by Graham Redfearn was originally published on DeSmogBlog.com under the title 'Mining Director Ian Plimer Misrepresents Climate Consensus Studies in The Australian Newspaper' and has been republished with permission.

We need the media to start telling the truth about the #ClimateEmergency. No more lies!

The latest attempt to undermine the consensus came from the... https://t.co/9eQowRspGe