If you couldn't get enough of 2016 you’ll be happy to learn it is now officially one "leap second" longer, reports history editor, Dr Glenn Davies.

The U.S. Naval Observatory announced on 6 July 2016 that a leap second would be added to official timekeeping on 31 December 2016.

For the 27th time since the first instance in 1972, a leap second would be added. This compensates for the slight slowing of the Earth that atomic clocks take into account. Adding the second keeps the Coordinated Universal Time in step with atomic time. That means your day and year – and everyone’s day and year – will officially be one second longer.

In the 21st Century, we no longer officially define a year by the Earth’s orbit around the sun. Instead, time is measured according to the oscillations of vaporised atoms of caesium-133. The most accurate and stable time comes from atomic clocks, but for navigation and astronomy purposes, atomic time is synchronised with the Earth’s rotation.

Using atomic clocks, we describe a year as precisely the time it takes for a vaporised atom of caesium-133 to oscillate 290,091,200,500,000,000 times. However, the Earth’s orbital period does not keep that level of precision. While atomic clocks beat to the oscillations of the caesium atom, Earth’s rotation is variable but is gradually slowing over time. In some ways, we’ve become too precise. This variability can be caused by a host of factors, such as tides, solar, wind, magnetic storms and melting ice caps. Perversely, to make up for natural variability, we now have to continually adjust our atomic calendar to keep track of the seasons. Leap seconds are added almost every year to correct for the offset.

There was a time when time was measured by the progress of the sun in the sky, by the length of shadows. Time depended on where you were on the planet. Before 1883, people used a sun clock to tell "solar time". Each community kept its own time, basing that time on the sun’s position in the sky. But the sun is always moving across the sky. Noon in one town would be four minutes later than noon fifty kilometres to the east. According to solar time, it’s noon when the sun reaches its highest point in the sky.

In 1883, to regulate time for the sake of railroad schedules, the United States adopted what is called "standard time", designating time zones and requiring all communities within a time zone to keep the same time — even though the standard time didn’t quite match solar time.

Leap seconds were created in 1971 in an effort to simplify adjustments to Coordinated Universal Time which had been defined by the 193-country members of the International Telecommunications Union in 1963 as a successor to Greenwich Mean Time. They have been added on 26 occasions since then and are always introduced at midnight on 30 June or 31 December.

The International Earth Rotation and Reference Systems Service tracks time using a network of atomic clocks in Europe, the U.S. and Australia. If you think of the Earth as a clock, then it’s running slow compared to the time kept by atomic clocks. It’s this discrepancy that regularly needs adjustment so that the world operates on an agreed and consistent time basis.

Leap seconds are added to our clocks to compensate for the Earth's slowing rotation. However, some scientists propose abolishing leap seconds in the future, redefining the way we measure time. Like a February 29 added to calendars in quadrennial leap years, leap seconds are used to keep atomic clocks in sync with the Earth’s rotation, which is slowed by the gravitational pull of the sun and moon. However, every time a second is added, the world’s computers need to be manually adjusted, a costly practice that boosts the risk of error and raises the spectre of havoc when differently-timed systems communicate. But without leap seconds, ultra-accurate high-tech clocks would race ahead of skewed solar time, amounting to a discrepancy of about 15 seconds every 100 years.

Britain wants to keep leap seconds, arguing their removal would forever break the link between our concept of time and the rising and setting of the sun. It would also spell the end of Greenwich Mean Time, which is measured by the time at which the sun crosses the Greenwich Meridian and was adopted in Britain in 1847. Experts also fear that once this link is broken it could never be restored because, although the Earth's timekeeping systems are built to accommodate the occasional leap second, adding a leap minute or hour to global time would be virtually impossible. 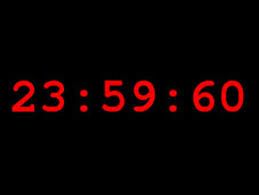 On the other hand, in 2012, a leap second brought about a number of website outages all over the Internet. According to The Telegraph, events like the turmoil of four years ago has made leap seconds more controversial. The U.S. wants to get rid of leap seconds, claiming they're too disruptive to precision systems used for navigation and communication. At a conference in Geneva in 2012, delegates argued that precisely-timed money transactions could go astray or vehicles could be sent tens of metres out of position if they are a second out in their measurement of time.

So, on 31 December 2016, the clocks were adjusted to read 23:59:60. This was the 27th time a leap second was added since 1972. Since the leap second was applied at midnight in Greenwich, London, however, it did not apply in 2016 everywhere. The “three, two, one, one happy new year” countdown could not accurately be applied in Brisbane, for example, where the extra second was applied on Sunday, 1 January 2017 at 9:59:60 am.

Great news! There's a leap second at the end of this year so 2016 is longer than you thought. Remember leap seconds? https://t.co/JkIEVFZwaA

In space, accuracy is crucial to understanding how satellites orbit, so we're adding a leap second to our missions: https://t.co/V2T3UQphPG pic.twitter.com/zQdpalzRnv

The experts say 2016 has been so great, they've extended it by an extra leap second. Happy New Year!