Justice for the Hodson dead — and the living (part 2)

What in the world is going on with Victorian justice? Contributing editor-at-large Tess Lawrence reports on yet another murky and tangled web.

You'd think that, with Peter Ryan and Premier Ted Baillieu sharing the same political bed, we'd be going nowhere a little slower in Victoria — so much for same sex political marriages. Alack, we are going nowhere fast.

You'd think that, with his legal background, Nationals Leader Peter Ryan – Deputy Premier and Minister for Everything – would complement the architectural proclivities of wooden Kennedyesque 'Baills' – he of skyscraper height – who gives fellow Liberal Tony Abbott a run for his money in his speedos — even in icebreaker waters.

That he remains Minister for Police and Emergency Services is a mystery and, like everything else this Government does, a state secret.

Given his outrageous underperformance in what was known as the 'Tristan Weston Affair' last year, Ryan should have been forced to hand back the golden handcuffs.

Sir Ken, an émigré from England, wore his uninherited knighthood with the absurd pomposity that can only be found in the upstart wannabe middle classes desperate to show we colonials, and Simon Overland in particular, how to best to tug our forelocks; difficult, given Commissioner Overland's closely shaven head.

It was as if being a 'Sir' was some sort of Myki entré card to Melbourne's haute société — but, alas, it proved to be just as ineffective.

The shonky conduct surrounding the Weston Affair has incestuous characteristics similar to the UK's phone hacking scandal and the now obvious and rampant improper relationships between the state, police, politicians, media and others — what I shall call the Unification of Powers, rather than the Separation of Powers.

In an interview with the ABC, Minister Ryan displayed the appropriate level of shock at what his own handpicked appointee Weston had done:


"This guy went about what he did in a way that I think defied anybody to have been able to pick him up until such time as the phone taps intercepted the conversations he was having."

In Part One of 'Justice for the Hodson dead — and living' we published most of a letter that Mandy, Andrew and Nicola Hodson delivered to Commissioner Ken Lay last month on April 24 and we again pose these questions:

Why is Justice in Victoria treating the three children of executed police informant Terrence Hodson and his wife Christine, as low life trailer trash?

Why are they being treated as the lesser among equals? Why is the execution of their parents – eight years ago tomorrow – still unsolved?

Why haven’t Victoria Police, the Department of Public Prosecutions, the Department of Justice, the Judiciary, the various regulatory bodies and Victoria’s ‘B’ Grade Governments – first the Brumby Government, and now the Baillieu Government, to say nothing of Attorney General Robert Clark – not been intent on finding the assassins?

Why was Carl Williams blatantly executed on April 19, 2010 — whilst a prisoner under the protection of the State in the maximum security Barwon Prison?

Why was the search for Barwon Prison General Manager, David Prideaux – who went missing in the Alpine National Park on June 5, 2011 – called off after a mere eight days?

And why was the Law Institute of Victoria, the National Australia Bank and McKean Park permitted by the Judiciary to run rampant and remove explosive documents and files from my premises and law offices, that contained vital investigative material and statements from informants and whistleblowers concerning these very matters, as well as the NAB’s financial dealings with several gangland figures — jeopardising the lives of my sources?

These are all critical questions. They go to the heart of suppression of truth and the freedom of speech, corruption, fraud, collusion, misconduct and abuse of process in this state.

On May 4, 2012, solicitors Lewenberg and Lewenberg also wrote to Chief Commissioner Lay on behalf of Mandy Hodson and the investigation into the murder of her parents, confirming they acted for Mandy and citing her unanswered letter.


''We have been requested by our client to advise you that our client is most concerned with the failure of the Commissioner to respond to our client and having regard to the forthcoming anniversary of the death of our client's parents on the 16th May, our client proposes to publish copy of the letter forwarded to you to the Minister of Police,, Deputy Premier of the State and to the media to seek their assistance to activate evidence of some police activity in the investigation of the above murders.

"May we expect an informed response to our client's correspondence before the 14th May."

On the 9th of May, Mandy Hodson received a letter from Inspector Michael Glowaski, Staff Officer to the Deputy Commissioner Crime & Operations Support, Mr Graham Ashton AM, which said:


"…in response to your letter dated 24 April, 2012 and impassioned plea to Victoria Police to take action in relation to the murder of your parents Terrence and Christine Hodson.

"Please rest assured that everything that can be done, in relation to this investigation, has been done and the compilation of the brief of evidence is almost complete. Upon completion it is our intention to forward the brief of evidence to the Coroner’s office with the recommendation that a formal inquest into your parent's death is conducted.

"I have also taken the liberty of forwarding your letter onto the Assistant Commissioner Crime who will undoubtedly bring it to the attention of the relevant investigators and address some of your concerns." 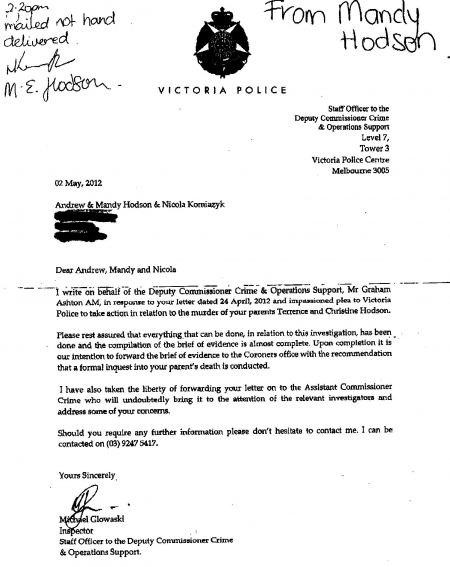 The letter was dated May 2, 2012. Mandy did not get the posted letter until May 9, the same day that Victoria Police announced a brief of evidence was being sent to the Coroner.


"The investigation's still ongoing but it is fair to say we are not about to arrest anyone in the next couple of weeks.  We see a coronial hearing as an opportunity to actually gather further evidence."

This is an extraordinary admission, all things considered.

It is worth noting that on Premier Ted Baillieu's précis of government achievements in the first year of Government, Justice and Human Rights get no mention. Neither does transparency, nor public accountability.

Because they are all strangers to us in this state. And there is little kindness or humanity in them.