Hey, Mr Minister for Women — I am Woman, hear me roar

Prime Minister Tony Abbott's glee at mocking and sidelining women on International Women's Day should alarm and disgust us all, says Lyn Bender.

The paternal grandfather I never knew prayed each morning, thanking god that he was not made a woman.

If there were a god I would thank her daily that I was not born a man. Not because I do not love and admire many men, but I am thankful that I have not had the legacy and burden of the many masculine stereotypes. These include a compulsion to appear invulnerable, tough and dominant. These attitudes have been linked to male’s consistently lower life expectancy compared to women. Males are, tragically, three times more likely than females to commit suicide.

The absurdity of the disrespect and contempt meted out by our Prime Minister for women: Tony Abbott is undisguised. He has assumed this portfolio as the self confessed “junk yard dog”, guarding territory in which he's decided no interloper shall set foot. Certainly, no woman shall venture there.

My grandfather prayed in pre-war Poland. His education had been limited and religious. I am attached to his memory. I can forgive him for is unknowingness, but Tony Abbott, whose ideas about women are close to medieval, is unfit to hold the highest office in this land. He governs for far less than half of all the people and, in particular, not for those under his special ministries of Indigenous affairs and women. He is a blatant sham and cynical pretender; barely concealing his "ha ha gotcha" scorn. Abbott is the man who will say anything to gain and cling to his political position and the leadership of his party. He laughs last; after pleading, he is given yet another chance. He betrays those he has sought to deceive with false promises.

In his latest selfie report card address to the nation on his Government’s achievements there is not one mention of the word woman.

As women have noted in Mamamia, there was

There is disrespect and insensitivity in the Liberal Party hosting its International Women’s Day celebration, in a club that does not allow female membership.

Yet in Parliamentary Question Time, like an oldtime preacher, Abbott raised his fist in the air, proclaiming that the Liberal Party had

“... smashed the glass ceiling! ... Thank god [that] bastion of old-fashioned chauvinism has finally collapsed like the walls of Jericho."

This was because, on International Women’s Day, women were temporarily permitted to enter this hallowed place. The event venue, the Tattersall’s Club, made a special exemption for women. Just this once, women will not have to show a male partner card, to gain entrance.

After the near death experience and subsequent “contriteness” in the wake of the challenge to his leadership, Tony Abbot has once more found his macho sense of humour. Having sworn to change his ways, he is laughing at the notion of women’s equality.

It’s not so funny. Nor is the failure to address the harsh reality, of where this hatred for women can lead. At its worst, it leads to violence and death. Abbott is oblivious to abuse against women. Having ostentatiously endorsed survivor Rosie Batty as Australian of the Year, he presides over the defunding of legal and community services that save women’s lives.

Yo ho ho. Tony Abbott has always joked around, saying things like:

“If we’re honest, most of us would accept that a bad boss is a little bit like a bad father or a bad husband … you find that he tends to do more good than harm. He might be a bad boss but at least he’s employing someone while he is, in fact, a boss.”

So, a bad boss is like a bad husband, or a bad father. Better than having no boss husband or father — no matter how abusive he may be.

But Tony Abbott’s worst act of bastardy is towards mother earth and the mothers and grandmothers, like me, whose children will be bequeathed a climate changed hell.

The metaphor and worship of the earth as "mother", is ancient. She may not literally be a woman, but Tony Abbott and the “old fashioned chauvinists” he seems to admire have treated the earth as an enslaved woman — to be raped plundered and defiled.

Who will forget his claim that “coal is good for humanity”?

Or his claim to be a conservationist, as he called for Tasmanian heritage listed forests to be unlocked and felled; as he was overseeing the fast tracking of coal mine approvals and the repeal and destruction of climate change mitigating initiatives

Mother of us all.

Place of our birth.

How can we stand aside

And watch the rape of the World

At the heart of any issue, is who tells the stories. And there is a gender bias! Men still largely dominate journalism. Do a spot check of any Australian newspaper, and check out the male to female ratio in bylines. On most “good” days, in my experience, it is one third female to two-thirds male.

The OpEd Project asked: 'Who Narrates the World'?

You guessed it — it’s mostly men. Women were frequently relegated to the “pink” zone of food, fashion, family and furniture.

I, too, did my time in the pink pages.

A study published in the UK Guardian found that men dominated national newspapers at all levels. The Washington Post also reported the same bias of males over females in newspapers.

So does this matter? We have, after all, a token hard line woman foreign minister Julie Bishop.

Yes, it matters a lot.

Psychologist Ruth Ostrow writes – in the pinkish, life health and well being zone, of The Australian newspaper – about socially induced male emotional blindness. Research suggests eight per cent of men and two per cent of women have a personality trait called Alexithymia. This involves lack of empathy and incapacity to express tender emotions. The dominant mode used is stonewalling and anger. The emotional brain may not connect effectively with the language processing centres of the brain.

This is manifested in

A government and media that sidelines women should alarm us all.

The full range of experience, understanding and empathy is being denied to our world. We should be mad as hell and, like mother earth, erupting in storms fires and floods; we should not take it quietly.

Women don’t need it all, just their fair share of influence in the world.

Lyn Bender is a professional psychologist. You can follow here on Twitter @Lynestel. Here, she talks about why she writes Independent Australia.

IA is a fearless truth teller. A messenger we really need.

It is not bought by advertisers and it does not massage the truth, as can occur in mainstream publications.

It has a terrific team of writers and editors. It doesn’t suffer fools.

It is the most honest publication I have ever had the honour of writing for.

I encourage you to become a supporter of IA. Because it is worth it.

Women rule. Subscribe to Independent Australia from just $5 per month. 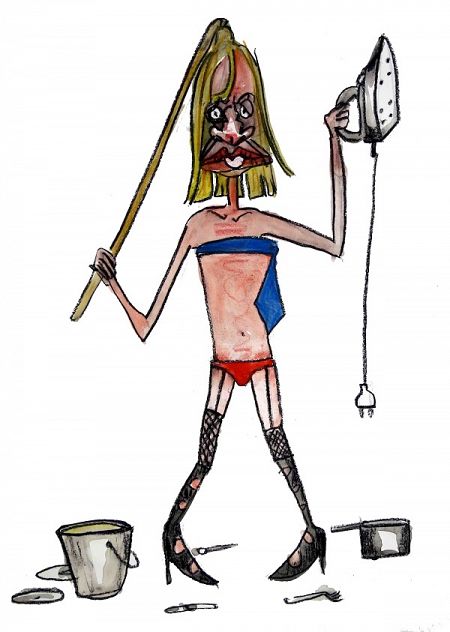 You can order John Graham originals like the above and the feature image in this piece from the IA store.