Tess Lawrence applauds the fact the new pope is not Cardinal Pell, but says there are aspects of the new pontiff's life that require much more scrutiny.

AND THE NEW Pope is ... not Cardinal Pell! Yay!

You could almost hear a collective sigh of relief over our continent earlier this morning when Argentina's Bishop of Buenos Aires, Jorge Mario Bergoglio was named as the new Pope – and Australia's Cardinal George Pell wasn't.

Pell's vanity is such that he thought he coulda beena contenda. 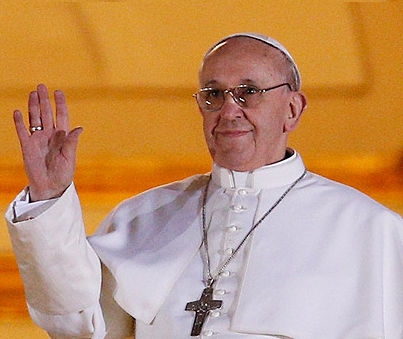 He didn't have a Holy Ghost of a chance. And progressive Catholic campaigners ensured he didn't. In fact, he was rightly put on a list of the 'Dirty Dozen', 12 Cardinals who were tainted in some way through association with child sex abuse, diffidence towards victims, trafficking to other schools/institutions of perpetrators, and other misdemeanours.

Last Sunday, Dino Crescini posted this in the Philippine Tribune.


Cardinal George Pell, tainted by sex abuse scandals, has no chance of becoming the 266th pope after Australian critics campaigned to publicise the allegations among voting cardinals, according to Australian commentator Paul Collins. 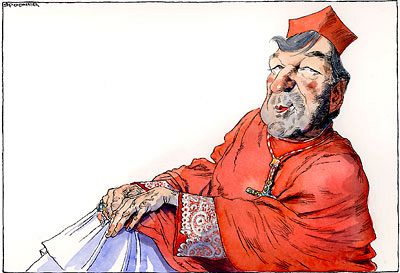 Taking a leaf from self-appointed traditionalist guardians who are quick to report Australian infractions to Rome, progressive Catholics have lobbied overseas journalists and cardinals to make sure they are aware of the 2002 inquiry into allegations that the Sydney Archbishop molested a 12-year-old boy several times in 1961.

Retired Supreme Court judge A.J. Southwell was ”not satisfied the complaint was established” but said he was impressed by the testimony of both the complainant and the cardinal.

”He has no chance,” Dr Collins, a former priest, said.

He said another problem for the cardinal was that his patrons – the former pope and other influential cardinals – had lost power. "In Italy, without patrons, you’re gone.”

Cardinal Pell was ranked fifth on ”the dirty dozen” list by international victims group SNAP of 12 cardinals it said should be disqualified because of their record on clergy sex abuse. The group said Cardinal Pell blamed a smear campaign by the media and was morally compromised. (Sydney Morning Herald)

In fact, members of SNAP, the international Survivors Network of those Abused by Priests travelled to Rome to lobby against the election of any of The Dirty Dozen and to create an awareness of their crimes, involvement and diffidence.

I have made no secret of my disdain for Cardinal George Pell, whose facile and anti-semitic remarks on Q&A last year gave the world a major clue as to why he should never become Pope.

In November last year, I called for him to resign.

His deplorable attitude and mismanagement in relation to the sordid and widespread child sex abuse issue was becoming more than increasingly delusional – and at long last others in the Church hierarchy started to speak up against Cardinal Pell and to deny that he spoke for them, including retired Bishop Geoffrey Robinson, who said that Pell was an “embarrassment”.

Whilst being the first Latin American Pope and the first non-European in more than a 1,000 years, he is also the first Jesuit to be appointed; the Jesuits are deemed to be the more vigorous intellects within the Roman Catholic Church, and more proactive and inclusive when it comes to issues of social justice and 'liberation theology'. We shall soon see if this bears out.

Moroever, the moniker he has chosen for himself, Francis the 1st, is a key to his individualism and a statement, surely, given that St Francis of Assisi is the Patron Saint of Animals and a fave compassionate symbol across the board.

And if Il Papa has named himself for Francis Xavier, the well-travelled Jesuit saint whose work is also acknowledged by other denominations, that too signals much — given that, unlike many of our politicians, he has resisted the extravagant perks and palatial accommodation of office and, at home, lived in an apartment, cooked for himself and caught a bus to the Manse and in Rome for the Conclave was photographed on several occasions walking through St Peter's Square, carrying his briefcase on his way to vote.

Like St Christopher, Patron Saint of Travellers, (who was struck off the Catholic Saints Registry ) both St Francis saints have burgeoned even more in popularity and have become philosophical and figurative touchstones for kindness,  compassion and a shared humanity.

It's been a big week for Argentina, who suffered the ignominy of defeat when the majority of (save for three) Falklands citizens voted in a referendum to remain British Overseas Territory  but whose wounded pride has been restored overnight, now that a son has been elected as Pope.

Not that the wishes of the Falklands people matter a jot as far as Argentina's glamorous President Cristina Kirchner and her spokespeople are concerned.


The vote comes as relations between Argentina and Britain worsen over the disputed territory, where the two nations fought a 10-week war in 1982 after the Argentine military invaded the Islands.

“This referendum has no legal grounds. It's not approved, nor will it be recognised by the United Nations or the international community,” Argentine ambassador Alicia Castro told reporters at a briefing in London.

“So this referendum is little more than a public relations exercise,” she said.

And not one to miss a good PR exercise herself, upon hearing the news of the new Pontiff's appointment, Prez Cristina Fernandez de Kirchner whipped off a congratulatory message today.


“On behalf of the Argentine Government and the people of our country I would like to salute you and congratulate you for being chosen as the new pontiff of the Catholic Church,” she said in a letter addressed to him.

...“It is our wish that, as you take command of the Church, you have a fruitful task as you take over the immense responsibility of fighting for justice, equality, fraternity and peace for humanity,” she added.

When Pope Francis came out on the balcony to gaze upon just some of his flock – of more than a billion Roman Catholics – to make the traditional blessing upon the people, he first asked a 'favour' of the people, that resounded in a deafening roar of approval from the thousands gathered. He asked the people to first bless him. It was a good first move. One hopes it is the first of many.

Pope Francis has been steadfast in his attitude against adoption by gays, anti-abortion and the other staples of the Church of Rome. In his attitude towards adoption, he is in conflict with President Kirchner.

And yet, in a clear statement of humility and inclusiveness, he has publicly kissed the feet of AIDS sufferers.

There are several aspects of his full life experience and political involvement that warrant further scrutiny and explanation.

Credit must go to the team at Wikipedia for posting a number of salient points before much of mainstream media.

Under the heading, 'Relations with the Argentine government':


On 15 April 2005, a human rights lawyer filed a criminal complaint against Bergoglio, as superior in the Society of Jesus of Argentina, accusing him of involvement in the kidnapping by the Navy in May 1976 (during the Dirty War) of two Jesuit priests. The priests, Orlando Yorio and Franz Jalics, were found alive five months later, drugged and semi-naked. Yorio accused Bergoglio of effectively handing them over to the death squads by declining to tell the regime that he endorsed their work. Jalics refused to discuss it after moving into seclusion in a German monastery. Horacio Verbitsky, an Argentine investigative journalist and former montonero, wrote a book about this and other related events titled El Silencio: de Paulo VI a Bergoglio: las relaciones secretas de la Iglesia con la ESMA. Verbitsky also writes that the Argentine Navy with the help of Cardinal Bergoglio hid the dictatorship's political prisoners in Bergoglio's holiday home from a visiting delegation of the Inter-American Human Rights Commission.

According to the book, after their release, Yorio accused the then-Provincial of his Jesuit order San Miguel, Jorge Mario Bergoglio, to have denounced him. Father General Pedro Arrupe in Rome was informed by letter or during the abduction, both he and Orlando Yorio were excluded from the Jesuit Order.

Bergoglio told his authorized biographer, Sergio Rubin, that after the priests' imprisonment, he worked behind the scenes for their release; Bergoglio's intercession with dictator Jorge Rafael Videla on their behalf may have saved their lives. "The cardinal could not justify why these two priests were in a state of helplessness and exposed," according to Luis Zamora, who said that Bergoglio's testimony "demonstrates the role of the Church during the last military dictatorship".

In 2010, Bergoglio told Sergio Rubin that he often sheltered people from the dictatorship on church property, and on one occasion gave his identity papers to a man who looked like him, to enable the recipient to flee Argentina.

Bergoglio stated that adoption by same-sex couples is a form of discrimination against children. This position received a rebuke from Argentine president Cristina Fernández de Kirchner, who said the church's tone was reminiscent of "medieval times and the Inquisition.

I think it was Socrates who said an unexamined life is not worth living.

One thing we know for sure, is that Pope Francis and his full life thus far will be fully examined.

It is worth noting that all Papal candidates were fully briefed on matters of serious corruption now confronting the Vatican.

Given that the Pope is God's man on the ground, it will be interesting to observe if Pope Francis will dismantle the girdle of misogyny that encloses the Vatican and its men.

There is speculation that Jorge Bergoglio is a compromise Pope; and that is different to being a compromised Pope.

If, through him, Jesus speaks — then it is time for Jesus to speak to the people in the language of the people. And that means speaking the Truth.

And that's not too much to ask of the man in the shoes of the fisherman.