Don Dale child abuse: Be part of the solution

Aboriginal and Torres Strait Islanders do not want more words written in reports that will be ignored. Frankly, if you’re not ... willing to stand beside us for the fight —​ then you are part of the problem. ~ Natalie Cromb, Gamilaraay woman, Indigenous affairs editor.

ON MONDAY NIGHT, the Four Corners program aired footage of abuse in the Don Dale Youth Detention Centre in Darwin, that occurred in August 2014. The footage revealed abhorrent acts of violence and torture visited upon children by the staff of the detention centre.

Yesterday, Australians have taken to social media expressing shock, dismay, grief and outrage. The prime minister is shocked and has called for a Royal Commission. The corrections minister has been removed and replaced by the chief minister of the Northern Territory, who took the opportunity to release a statement that once again expressed shock (I will revisit this). He also took the opportunity to throw out platitudes about the conduct, raising questions as to whether powers afforded corrections officers “have been used in the right way” and ensuring all corrections officers fighting the good fight and “upholding the law” knew he supported them.

Today, yesterday, the day before and every day before that, for the last 228 years, Aboriginal Australia has been speaking loud and clear that incidents of this nature are occurring all the time. White Australia commits violence against Aboriginal Australia physically, emotionally, with genocidal policies and oppressive tactics — the brutally simple means of maintaining the status quo of black subversion. This is not unique and White Australia’s “shock” and calls for a Royal Commission are, frankly, farcical.

What does a Royal Commission mean to us?

Let me tell you. 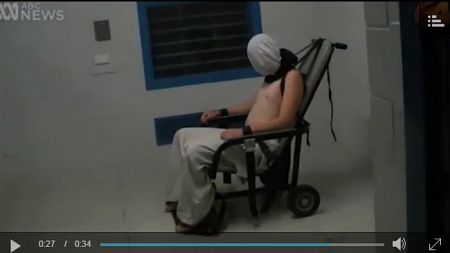 The Royal Commission into Aboriginal Deaths in Custody was 25 years ago — there were 339 recommendations following investigation into 99 deaths of Aboriginal people that occurred while in custody. The tabled report was supposed to form the framework for eliminating Aboriginal and Torres Strait Islander deaths in custody. The recommendations were ignored and since the report was handed down, 365 further Aboriginal deaths in custody have occurred and, in all cases, there is a systemic lack of accountability among the people with the most power.

The National Inquiry into the Separation of Aboriginal and Torres Strait Islander Children from their Families was 19 years ago — there were 54 recommendations and, once again, most were ignored despite the report concluding that:

We know that we have had The Apology but as Senior Researcher Paddy Gibson states:

'If Rudd read Bringing Them Home, he must have stopped halfway through. The report’s final chapters warn that the operations of contemporary child protection agencies were replicating many of the discriminatory and destructive dynamics of the Stolen Generations era.'

We are now 19 years down the track, the most pertinent recommendations have been ignored and child removals are now at a record high.

I am not speaking in abstract terms here. Corrections officers knowingly breached their duties to commit deliberate violence against children.

Children who were already victims of the system have had their trust and respect of authority – if there was any left – obliterated and the man responsible for the Northern Territory took the opportunity to use very telling language in his media release (below).

This is not a question. There is video evidence of events that he cannot deny and yet he continues to attempt to explain away and minimise what the country has witnessed.

' … consider if … used in accordance with the powers afforded to custodial officers.' 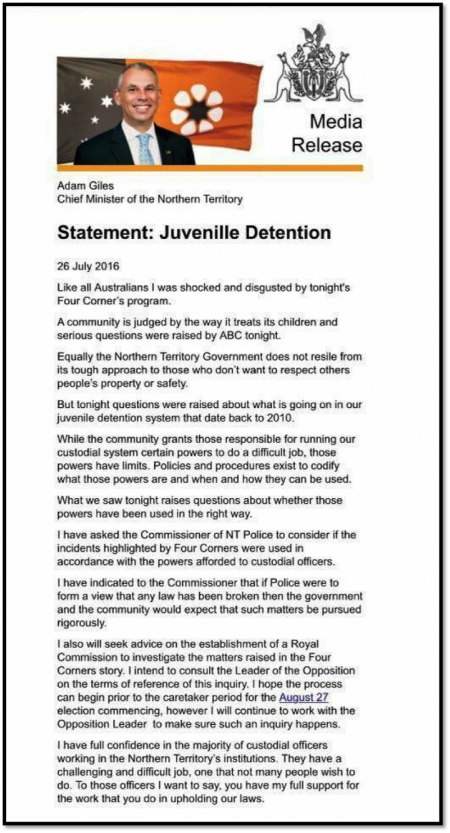 This is a government official questioning whether the torture, deprivation and violence perpetrated against children is in breach of their duties. If we have, in any piece of legislation in this country, bestowed anyone the power to commit abhorrent acts of violence against children, then there is little hope for us.

He now wishes for us to believe he did not know about this when it was reported last year and has taken a strong stance in “sacking” Corrections Minister Elferink (though Elferink was not sacked — he retains his other portfolios including Health, Children and Families and Mental Health).

The Northern Territory Government response was to take the portfolio and attribute it to another person, reiterate that there is a youth crime problem and commend corrections officers. The Federal Government is feigning ignorance of this issue also and posturing about a Royal Commission.

When children are being subjected to conditions that experts state are worse than Guantanamo Bay, the government closes its eyes and puts its hands over its ears.

Because this is Australia. A country where a large portion of the population is uncomfortable with the historical truths of the land being forged on the blood and devastation of Aboriginal Australia. A country where the past should be left in the past and there is zero tolerance for anyone speaking the truth of historical racism and especially not of contemporary racism — because white people do not deserve to feel guilt for reaping the rewards of their ancestors’ genocidal actions.

We live in a nation where abuses of human rights are ignored and if the human rights commissioner dares raise the point, the leaders will call for her head.

We live in the nation that has right wing middle Australia decrying the lack of police powers, despite a mountain of evidence pointing to a considerable portion of officers abusing what powers they do have.

The crux of the matter is that the institutions within Australia and the people that administer them, do so with contempt towards Aboriginal and Torres Strait Australians. The system is not applied equally — it is targeted and demonstrably racist.

Aboriginal and Torres Strait Islanders do not want more words written in reports that will be ignored. We want justice. We want change. We want the corrections officers to be held criminally culpable. We want the officers of the government held to account, the way that officers of a company would be if such conduct occurred under their watch. We want the systemic racism that targets Aboriginal and Torres Strait Islander people to cease by first overturning the apartheidesque Intervention and we want all Australians to act. To command the government to act. To demand change.

Frankly, if you’re not part of the solution and aren’t willing to stand beside us for the fight — then you are part of the problem.

What can you do?

Australia's Shame: The brutalisation of children behind bars | Four Corners

An in-depth look at the inhumane treatment of juvenile detainees in Don Dale from last year by @heldavidson https://t.co/NRYENfNm6W