The re-emergence of the Medicare co-payment idea for GP services could be the first step in the Coalition dismantling Australia’s universal health system, writes Dr Shaun Wilson.

All Australians should be deeply worried about the re-emergence of the Medicare co-payment idea for GP services.

"This is the beginning of the end for Medicare".

There are good reasons to believe him. Threats have been looming for some time and one in particular deserves mention before going on.

Few people noticed one of the final recommendations of the National Health and Hospitals Reform Commission established by the Rudd Government and which reported in 2009. It proposed the idea of Medicare Select, which would mean breaking up Medicare into multiple insurance plans so that providers would (eventually) compete for customers over services and choice.

People working in policy and politics know exactly what this proposal means in the long term. It follows a formula to initially set up ‘quasi markets’ (markets for government services) with an unstated end goal: the privatisation of the government service — in this case, Medicare.

More on this later.

The Chair of the Commission herself, Prof Christine Bennett, had a background in the private health insurance industry — she worked as chief medical officer in the Australian arm of health multinational, Bupa, founded in the UK and now with vast interests in European private health.

Last year, in 2013, Bupa went on the record saying they wanted Medibank Private privatised and that they sought an

The former is Abbott Government policy and the latter, well, falling short of ending involvement in fee-setting, the Coalition government has allowed private insurance premiums to rise by a generous 6.2% this year (inflation is 2%) — the highest since 2005, according to media reports.

Medicare is a universal health insurance system much loved by Australians. It came into being under the Hawke Labor Government in 1984 at the insistence of the ACTU in developing its Prices and Incomes Accord with the incoming Hawke Government. But it is actually built on the energetic foundations of the Whitlam Government’s Medibank, which had been slowly destroyed by the Fraser Government in the late 1970s — a destruction that prompted a general strike in 1976. Medicare also faced, from the start, strong opposition from the Coalition, private health insurers and the Australian Medical Association.

Australia’s Medicare could never have developed along the path followed by the United Kingdom, which nationalised health services under the umbrella of the NHS (National Health Service) during the term of the Labour government of Clement Atlee. Under the NHS, UK doctors are employed directly by the Government.

The British Medical Association (BMA), which represented doctors here in Australia during Ben Chifley’s efforts to nationalise health, successfully defeated his Government’s proposals in 1949 in the High Court citing the ‘civil conscription clause’, which Australia’s conservative parties and the BMA has demanded in turn for support for the constitutional referendum required to build a post-war welfare state. The Court ruled Chifley’s model amounted to such conscription of medical staff.

“… the [Labor] Party turned its attention to developing a system whereby the Federal government would pay patients’ fees directly to doctors.”

And that’s how Medicare works — the federal government uses its powers as a huge, single purchaser of (privately employed) medical services to moderate, regulate and subsidise ‒ sometimes completely ‒ these fees.

Based on a range of evidence, it can be concluded that the Medicare scheme has been an enduring success. It has been inexpensive in comparative health-cost terms, contains health expenses, and has massive public support. However, the Coalition has never warmed to the scheme, reluctantly accepting the political popularity of Medicare in 1996, when then Opposition leader John Howard promised to preserve Labor’s signature reform in his bid for office.

During its time in office, the Howard Government was ‘caught out’ for what was widely perceived at the time as efforts to passively undermine one of the integral purposes of Medicare — to ensure poorer Australians and families could get basic medical treatment without consideration of cost. Bulk-billing is, of course, now part of the Australian lexicon. By 2003, however, when Tony Abbott became Coalition health minister, bulk-billing rates had had fallen to 67 per cent (they are presently around 82 cent), which prompted a major public outcry and forced the Coalition to repair access to this basic entitlement.

Now let’s come to the present discussion of “co-payments”, which will considered by the Coalition’s Commission of Audit, led by Business Council of Australia President Tony Shepherd.

There are good reasons to believe the consideration of co-payments ‒ up-front payments for visiting the GP ‒ are more than just an effort to rein in costs given the Abbott Government’s goal to reach surplus over the next decade. Business and the Coalition see opportunities in the present political situation and climate ‒ one in which Australians have been convinced that the economy is in poor shape with a federal budget in even worse trouble ‒ to reduce social entitlements, weaken the public service and widen business opportunities in a new round of state and federal mass-privatisation.

Most importantly, the Coalition remains wedded to a predominantly private health model for Australia and, whether it happens under the Abbott government or not, the pressure to dismantle Medicare ‒ in substance if not in name ‒ is growing.

There are many paths to the privatisation of Medicare; here’s one that captures some of the possible steps to achieving this end:

1. The introduction of co-payments

A co-payment for multiple visits to GPs seems innocuous enough and, for some, even reasonable.

The savings to the Federal budget, presumably from people who need to visit doctors frequently are unlikely to be large and would raise nowhere near the revenue of other measures, including an increase to the top income tax rate of a few percentage points. But that is not the point. Compulsory co-payments are about the long-term: breaking down public solidarity about a scheme that Australians associate with providing something for free and something for everyone.

As it stands, Medicare is a bulwark against the public getting used to ‒ once again ‒ paying up-front for their medical services. Overcoming these expectations is especially important in weakening Medicare’s support among middle and higher- income earners. People will start to ask: if GP visits are increasingly met with co-payments, what is the point of Medicare? Would it matter much to me or my family if Medicare was replaced altogether by a private health scheme?

Actually, Medicare’s popularity in its current form will make any co-payment proposal unpopular. The goal would be to avoid the initial public backlash, so it is possible any Coalition plan to introduce such payments would be start gently, designed to prepare the public for paying upfront and often for health services down the track.

2. Introduction of a Medicare Select-style scheme

Let’s go back to the Health and Hospitals Commission report of 2009, which proposed greater ‘choice’ in health insurance.

The report tamely suggests that, instead of the current Medicare:

Actually, it was a polite way of saying choice of commercial providers.

It’s clear why the Coalition might bring such a reform to life — parts of Medicare Select would be open to privatisation without compromising Medicare’s universal ‘mandate’ that has all Australians insured. Presumably, you could ‘opt out’ of the old (‘public’) Medicare and join a private health plan, subsidised by the government. With rising co-payments under Medicare anyway, for some, this would seem both logical and attractive.

The Coalition has no qualms about keeping its expensive and unnecessary Private Health Insurance Rebate, introduced by the Howard government to keep the private health insurance prosperous and profitable and one then subjected to Labor means-testing in the name of equity and cost. It would be surprising to see it feature in the list of proposed cuts in Tony Shepherd’s soon-to-be-released Audit report, even though it wholly deserves to be on that list.

But, down the track, the Rebate could serve a vital purpose — to encourage better-off (and presumably, highly insurable) people into privately controlled plans under the new Medicare umbrella, with the premiums subsidised by government.

Alternatively, one might envisage a scenario where consumers choosing to opt out of public health insurance would simply stop paying the Medicare levy altogether.

Faced with such a proposal, people might say: well, there’s a choice between public or private — you can still choose public.

But one would have to ask in reply: wouldn’t a government committed to boosting private provision need to commit funds to that goal instead of consolidating public health?

Indeed, the ‘remaining’ public Medicare would soon emerge as the inferior selection.

Full or part deregulation would boost profits overnight and presumably encourage entrants to the market, especially if subsidies to private insurers were continued on a scale Holden and Ford could have only dreamt of. With deregulation, Australia would take a step closer to the mess that the United States ended up in — a privatised, loosely managed system in which consumer choice begins to look like an uncoordinated maze of overlapping and unaffordable services.

Whether any or all of these efforts at dismantling Medicare take place under the Abbott government is anyone’s guess. To sceptics, this agenda ‒ or one like it ‒ will appear far-fetched. But, around the world, business is seeking entry into public health and, for that reason alone, Australians should be alert to threats to Medicare, to its equity, to its efficiency, and to its ideals.

Working Australians fought long and hard for a decent, universal public medical system. So far, Labor in opposition has called the idea of co-payments ‘a tax’, appealing to a hip-pocket nerve and to the idea of a broken promise.

Far more effective would be to stand up for what Medicare symbolises about Australia and to reaffirm its place, in the words of former Prime Minister Bob Hawke, as

This piece was originally published on sallymcmanus.net. 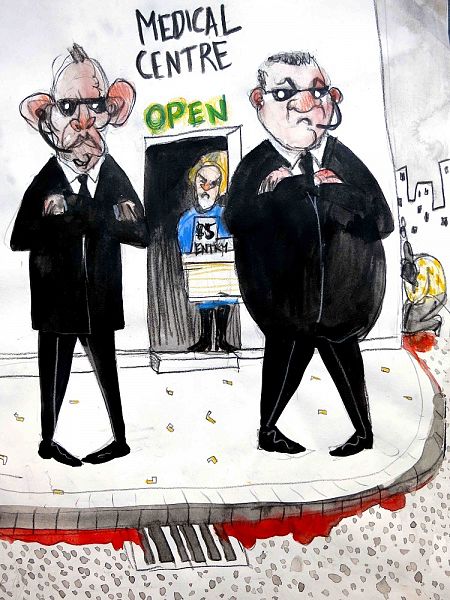 10 January 2014, 11:30am The re-emergence of the Medicare co-payment idea for GP services could be the first ...
Join the conversation
comments powered by Disqus
News updates