A mass protest in Melbourne stopped Border Force harassing people in the streets over their visas, so why don't people care that the same laws are being used to raid and harass sex industry businesses and workers? Janelle Fawkes comments.

The Melbourne protest leading to a backdown on what was effectively a plan to conduct racial profiling in the streets was massively important and a win. However, I can't help but reflect upon the racial profiling practices and punitive approaches that are the precursors to this point, and about which few people are protesting. The powers the Australian Border Force intended to use in Victoria are also those that allow them to enter and check visas in sex industry businesses.

On Wednesday last week, 19 massage parlours in the Northern Territory were raided in a joint Australian Border Force and Police operation. 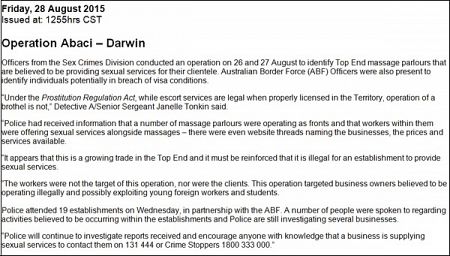 A history of raids

For the entire early 2000s Police, the AFP and Department of Immigration, usually with the media in tow, raided brothels and massage parlours around Australia.

These raids were not of all brothels, they were of businesses that were described as Asian brothels, with non-Caucasian owners or management, or those that were known to employ Asian-background workers. There are literally hundreds of incidents of women with towels over their heads (trying to protect their privacy) being paraded out of brothels in their work outfits while enduring one of the repeated police raids on their workplace. It became so frequent at some brothels that signage was put up apologising for the inconvenience of the raids that were likely to occur.

The reality of the raids were not only fairly extreme negative impacts on people's businesses and incomes, but also people's right to privacy was ignored, with demands to show identification in front of other workers and clients, and peoples photos flashed on the evening news and daily papers. There followed an extreme sense of unfairness, as workers describe the Caucasian worker next to them being left alone while those of Asian appearance were singled out for police interrogation. Of course, countless migrant sex workers were deported for minor visa irregularities,of whom at least one died in detention. In most cases, nothing was found, but countless sex workers were left distressed by what they described as unnecessary, intimidatory and discriminatory.

These raids cost millions of dollars and didn't result in detection of trafficking victims. To those involved, the racial profiling aspect was clear and well articulated but where was the outcry?

To some degree these raids were sanctioned by those, even in the left, who swallowed the mainstream media portrayal of the Asian-background sex worker as a sex slave Add to the mix pressure from the U.S. Governments' annual 'Trafficking In Persons' report that places countries on tiers, rating whether they have done enough to prevent trafficking. The U.S. report is lased largely on media articles and stems from the U.S. Government policy that criminalises the sex industry, as a legitimate, though unproven, approach to preventing trafficking. And, of course, it wasn't long before hundreds lined up to use this issue as the latest platform to end the sex industry – radical feminists included – and had formed what is now commonly referred to as the "rescue industry", who need to exaggerate numbers and cases in order to keep the funding rolling in and who are quick to tag anyone who questions these approaches as "trafficking denialists".

While police say it was not workers and clients who were the target of the raid of 19 premises in the Northern Territory last week, but rather business owners "possibly exploiting young foreign workers and students", the impact upon sex workers was the same.

Ironically, or not, the same laws that were intended to be used in Melbourne, were used to allow the ABF to enter sex industry businesses in the Northern Territory and demand people's evidence of correct visas.

So why is it that we are ok with some sex workers enduring this type of singling out in their workplaces, or at the border when entering or leaving Australia, clearly with the same racial profiling implication, but there is no outcry and no mass action.

Most Australians are unaware of the racial profiling that has been happening in brothels in Australia for more than a decade. Sex workers have been concerned about these issues for longer than that, and perhaps last week's attempt by Border Force to carry out the same visa checks on the streets will lead people to look into the history of these powers in Australia.

Racial profiling is as unacceptable in brothels as it is on the streets and this new turn of events could lead to improved solidarity and concern about these issues for everyone.

Oppose discrimination and inequality. Subscribe to IA for just $5.