After both England and Australia made bleak starts to the T20 World Cup this week, one of them will likely be eliminated after just three Super 12 games, writes Ronny Lerner.

THE MOST famous rivalry in world cricket is preparing for one of the biggest limited-overs matches in its history this Friday night when Australia take on England at the MCG.

The arch-rivals headed into the 2022 Twenty20 World Cup as two of the hottest favourites to win the tournament.

But, incredibly, after both countries made inauspicious starts to the competition this week, one of them will likely be eliminated from calculations after just three Super 12 games.

Neither team was expected to face a knockout game until at least the semi-final stage, but after the hosts were smashed by New Zealand in their opening game at the Sydney Cricket Ground on the weekend and England found itself on the receiving end of one of the biggest upset results in the tournament’s 15-year history on Wednesday (when minnows Ireland downed England by five runs in a rain-affected contest), they both find themselves teetering with 1-1 win-loss records.

To put that into context, at last year’s tournament, the four semi-finalists progressed from the Super 12 phase with records of 5-0, 4-1, 4-1 and 4-1 respectively.

That strongly suggests that neither Australia nor England can afford to put a foot wrong in their final three Super 12 games if they want to finish in the top two of Group 1 and make it to the final four.

To say both powerhouses have been in unconvincing form would be an understatement. 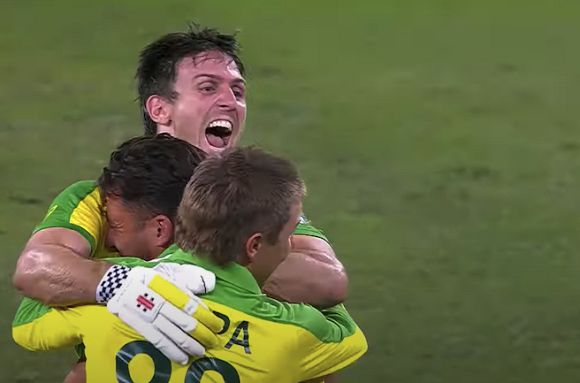 Australia hoisted the T20 cup into the Arabian sky last year after winning the elusive trophy for the first time. Twenty20 World Cup cricket starts this Sunday in Geelong with all signs pointing to a blistering series.

After its much-vaunted bowling attack was picked apart by the Kiwis, specifically Devon Conway, on Saturday, Australia’s battling line-up put up scant resistance, save for Glenn Maxwell, as it crashed to an 89-run thumping.

And it didn’t get that much better for the reigning champions on Tuesday when they took on Sri Lanka in Perth. If it wasn’t for a record-breaking half-century from Marcus Stoinis, who reached 50 off just 17 balls – quicker than any other Australian in history – things could’ve got quite hairy, indeed.

The form of skipper Aaron Finch continues to be an issue, as well. He might’ve made 31 not out against the Sri Lankans, but it was one of the most torturous innings you’d ever wish to see, as he got five or six let-offs and really struggled to time the ball. He also faced 42 deliveries, which is a figure that should yield a score of at least 60, especially when you’re an opener.

But despite all of that, it would still come as a surprise if he was dropped. After all, he is the captain.

From a bowling perspective, Pat Cummins is the biggest concern for the Australians. The paceman's figures across the first two games are 1-82 from eight overs at an alarming economy rate of 10.25, having been spanked for nine fours and three sixes all up.

His worrying form has even led former champion Australian batsman Mark Waugh to call for him to be dropped.

The Aussies aren’t on their own, though, because England has also failed miserably to live up to its billing as a pre-tournament favourite.

After doing what they had to do to get past Afghanistan on Saturday in Perth, the English suffered the ultimate ignominy on Wednesday, losing to neighbours Ireland, who only became a test-playing nation four years ago.

Bowlers Chris Woakes, Sam Curran and Mark Wood, in particular, came under attack and although the latter two combined for five wickets, they still leaked 65 runs from seven overs between them at an economy of 9.29.

And superstar trio Jos Buttler (duck), Alex Hales (seven) and Ben Stokes (six) failed miserably at the top of the order, which placed the rest of their batting line-up under enormous pressure.

Marcus Stoinis just gets the 50 of 17 balls against Srilanka in Perth. This is the fastest 50 by Australian batsman in T20 International Cricket.

Moeen Ali (24 not out off 12 balls) looked like he had his eye in when the rain came tumbling down and England could rightly wonder, "What might have been?" had the rain stayed away given how good Ali was looking, but that would've papered over the fact that it found itself behind the game against a cricketing lightweight for the vast majority of the contest.

But despite that disastrous result, overall, England's bowling attack has looked a lot more threatening than Australia's, with Curran (seven), Wood (five), Stokes (three) and Liam Livingstone (three) already right amongst the wickets, while Josh Hazlewood (three) is Australia’s only multiple wicket-taker.

In fact, Australia’s bowlers have only claimed eight wickets from their first two games, compared to England’s 19, with each side executing one run out each.

Yes, England’s opposition has been inferior, but that is still an extremely worrying statistic for the Aussies.

And it’s for that reason that Australia’s maiden home T20 World Cup could prematurely come to an end in embarrassing fashion at the hands of the old enemy, who would take great relish in extinguishing the Aussies’ hopes of back-to-back titles.