Australia hoisted the T20 cup into the Arabian sky last year after winning the elusive trophy for the first time. Twenty20 World Cup cricket starts this Sunday in Geelong with all signs pointing to a blistering series. Ronny Lerner reports.

IT SEEMED like only yesterday that Australia finally scaled the world Twenty20 (T20) summit by winning their first world cup in the shortest form of the game.

Well, in sporting terms, it pretty much was yesterday. A mere 11 months after the Aussies hoisted the trophy into the Arabian sky, they’re being forced to defend it, although this time the T20 showpiece will be on home soil.

It all kicks off on Sunday in Geelong when the eight qualifiers – Sri Lanka, West Indies, Ireland, Zimbabwe, United Arab Emirates (UAE), Namibia, Scotland and The Netherlands – begin their battle for the final four spots in the Super 12 stage.

And then the big guns – Australia, England, India, New Zealand, Pakistan, South Africa, Bangladesh and Afghanistan – make their first appearance on 22 October as the final dozen teams start jockeying for positions in the knockout phase.

It seems slightly cruel that after finally winning the thing for the first time in seven attempts – and 15 years – the Aussies might have to part ways with the title of world champions within the space of a year.

After all, this is the shortest gap between tournaments since the 2009 and 2010 competitions in England and the Caribbean respectively were separated by just ten months. 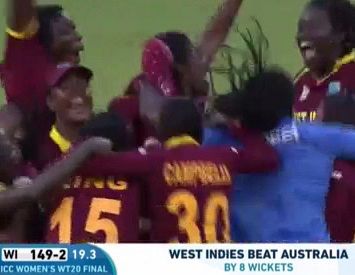 For context, the last gap of five years, between the 2016 and 2021 editions, was the biggest — although, of course, COVID played a role in that. But, on the flip side, Australia has quickly been given the chance to become the first nation to win back-to-back titles and just the second to claim multiple trophies along with the West Indies.

And while the hosts have been installed as favourites to repeat their heroics from the UAE last year, this year’s competition looms as a three-way battle with England and India.

Australia’s form in the lead-up to the tournament hasn’t been overly convincing, with a series sweep of the West Indies sandwiched in between series losses to fellow favourites India and England.

Much of the focus in the limited-overs arena this year has been on Aaron Finch’s form — the captain retiring from one-dayers after a horrendous run of outs. And while he hasn’t been firing on all cylinders in Twenty20s, the 35-year-old has been producing marginally better results, averaging 22.57 in his last seven knocks, compared to 3.88 in his final eight One Day International (ODI) innings.

There'll be no shortage of batting firepower to help Finch, either, with David Warner, Glenn Maxwell (who is also out of form at the wrong time), Matthew Wade and Mitch Marsh some of the greatest T20 batsmen the country has ever produced.

Meanwhile, newcomer Tim David has set tongues wagging with scores of 54, 42 and 40 in his last five digs and Marcus Stoinis is capable of tearing opposition attacks apart as well.

With the ball, the Aussies have as good a frontline attack as any nation with Adam Zampa, Mitch Starc, Josh Hazlewood and vice-captain Pat Cummins leading the charge.

But as recent performances against England and India show, it’s all well and good having the talent at your disposal, but you still have to produce the goods.

One glance at the England squad and it’s easy to see why they are so fancied to clinch their first T20 championship in 12 years. Names such as Jos Buttler, Ben Stokes, Alex Hales, Dawid Malan, Jonny Bairstow, Moeen Ali, Chris Jordan and Adil Rashid are enough to indicate that they are a world-class outfit.

And with the likes of Rohit Sharma, Virat Kohli, Jasprit Bumrah, KL Rahul, Rishabh Pant, Suryakumar Yadav and Ravichandran Ashwin at their disposal, India is also in with a solid chance to reign supreme for the first time since taking out the inaugural trophy back in 2007.

South Africa, Pakistan and New Zealand can’t be discounted either, and with them in the mix as well – especially the Proteas and Kiwis who are chasing their maiden crown – it all points towards a hard-fought and hotly-contested competition.