In 1953, 14-year-old Shirley Collins was brutally murdered after heading off on a tram for a night out in Melbourne.

My mother – another Shirley, who’d also joined the workforce at age 14 just two years earlier – had been flashed, followed home by a stranger off the tram, had a man on a tram use a newspaper to hide his hand as he felt her leg, inching his way up her stockings, been invited to sit on the lap of a kiddie fiddler boarding with neighbours and, when innocently asking a man what sized fruit he wanted, the man responded by grabbing her breasts.

Mum knew that high heels were weapons to be twisted into the foot of the sleazy and hatpins were to push and twist into the groins of these same men. Melbourne in the 1950s left many women shrugging off this kind of treatment by men, it never occurred to Mum to report it. It was just part of being female in this city. 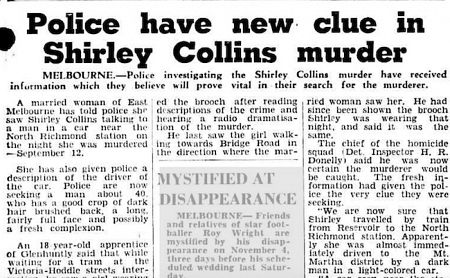 It was then my grandfather said a firm non-negotiable, "No", to my mother’s request to play basketball at night. No nighttime tram trips would be permitted. Certainly not now. It was not only the name "Shirley" that they shared — Miss Collins' photograph bore some resemblance to Mum, enough to scare my grandfather.

At 83, Mum still gets a spooked look over her face at the mention of Shirley Collins. Perhaps it’s why she barricades herself in her home every night. I wonder if my grandfather would’ve let her go if she’d had a mobile phone or , even better, mobile data to FaceTime him on her journey. My guess is he probably would’ve, as it sounds like a virtual chaperone.

Fast forward to 2019 and the murderer of Shirley Collins still remains unknown. Another cold case. Another woman dead at the hands of a man.

This week, many are hoping the murderer of Aiia Maasarwe will rot in gaol. Aiia Maasarwe took a tram, had only a short walk to her home and she had the benefit of FaceTime — one of the new technologies we carry with us that make us feel safe. Sadly, Aiia Maasarwe was using FaceTime at the moment she was attacked without it proving any deterrent. It simply didn’t stop the evil hiding in plain sight in our society.

I am so thoroughly sick to my stomach of men murdering women. The human cost of male violence is staggering, the incalculable social trauma & human misery it engenders is soul destroying. It's weight is intolerable #EndMVAW

There is only one solution to this evil. It is for good men to speak up everywhere, to become as outraged as we women are, to admit they’re scared for our safety the way we are — daily. I’m sick of walking with my keys between my sweaty fingers; I’ve used them once. Once more than I should need to.

Meanwhile, online, men seem more upset about a Gillette razor ad that says, in a nutshell: do no harm if you want to be the best man you can be. Why are they not upset that Aiia Maasarwe’s killer, just like Shirley Collins’ killer and so many in between, hid right among them?

Men, you have killers using you and your outrage at advertising executives of a brand as a safe harbour! It’s time to call these men out rather than allow them refuge among you. Do it for Aiia Maasarwe, for Shirley Collins, for Jill Meagher, for Masa Vukotic, for Eurydice Dixon, for all the women in your life and for the next generation.

'In Australia, violence against women and girls is considered an inevitability about which authorities can apparently do nothing.'Eurydice Dixon: The message for women is clear https://t.co/iAY2DyLTka @IndependentAus @noplaceforsheep

The Pentecostal PM and the practice of 'tithing'

The unravelling of the flag on Australia Day

26 January 2019, 7:00am Inspired by an anecdote where an Australian flag became unravelled, Joanna Penney ...