NICOLA SCAIFE is the World Women’s Ballooning Champion, winner of the recent Canowindra Challenge and hot contender for the upcoming National Ballooning Championships in Northam, WA. IA entertainment editor and balloonist John Turnbull takes her back to where it all began…

“I went for a flight as a passenger when I was living in Canberra, and I just loved everything about it. It was totally different from anything I had ever done before. At the time I needed a job, so I asked the pilot Alan Shore if he had any jobs going, and a few days later I was out crewing!”

While the ground crew are an invaluable part of the balloon team, Nicola wanted more, and soon set her sights on becoming a pilot.

“Alan and his partner Jackie were amazing. As soon as I expressed an interest in learning to fly they went out of their way to help me. They were really encouraging, so about six months after I started crewing I got my student pilot’s licence. I got my private pilot’s licence in around 2007 and my commercial licence in 2009. Because I worked with a professional balloon company getting a commercial licence was always my aim, and I was fairly driven to reach that goal.” 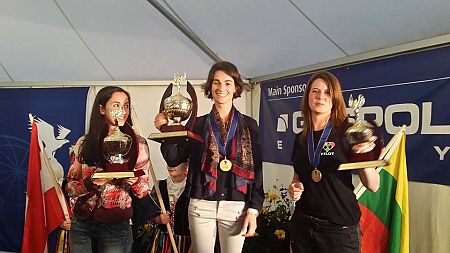 After flying commercially for a few years, Nicola discovered the world of competition ballooning. Based on the pilot’s skill and ability to reach a goal rather than who flies the fastest, the inaugural Women’s World Ballooning Championships was held in late 2014. Despite only having a few years flying experience, Nicola came home with the trophy.

“I only flew in my first competition two years ago, at the Canowindra Challenge, which was also the Australian National Championships for 2013. A few months prior to this they announced that there would be a Women’s World Championship, so I made that my goal. The event was held in Poland in September of 2014, with 39 pilots from 16 different countries competing. The fact that the competition was in the Nothern Hemisphere made things a little different to flying over here, but it was a great experience.”

On a national level, Nicola recently competed in the Canowindra Challenge, an annual competition held in the traditional home of hot air ballooning in Australia. During a week beset by challenging weather, Nicola beat not only the best pilots in Australia but also the reigning world champion, Yudai Fujita.

“The Challenge was a great event, and it was fun to beat the boys. The National Championships are coming up in Northam in late August, so that’s the next priority. It’s the first time in my short competition history that we’ve had two major events in Australia in a single year, so we’re definitely going to support Northam. It will be nice to fly somewhere new, because I’ve only really flown competitions in Canowindra and Poland so far!”

While ballooning is generally a family-friendly pastime, significant pressure is added in the competition environment, with otherwise calm pilots being known to lose it completely under the pressure. I asked Nicola how she combined motherhood (her son Hugo is about to turn 2) with elite level competition.

“Hugo has been to all of my ballooning competition — he flew the first one in my belly when I was five months pregnant. When we’re competing Hugo crews for me, of course. If both Matt (husband and pilot) and I are flying we tend to get a babysitter, but he’s out almost every morning with us during competitions. Matt and I agreed before he was born that we wanted to maintain a similar lifestyle and not give up the things we love to do. I think we’ve been really lucky because he’s a really easy-going little boy, but kids are pretty flexible. He doesn’t know any different lifestyle than ballooning, so he’s used to having his nappy changed in a rice paddy in Japan and getting up while it’s still dark to go to briefing.”

In recent years competition ballooning has become heavily reliant on technology. While the basic ballooning setup hasn’t changed much since the flight of the Montgolfier Brothers back in 1783, many pilots now fly with laptops, tablets and enough electronic equipment to guide the space shuttle. I asked Nicola whether some pilots could become dependent on technology at the expense of their natural flying instincts.

“It’s an interesting question. When I started learning to fly we had GPS, and I was flying for a couple of years before I got my first little computer. In a way I’ve never known any different, but the only concern I have is when I’m flying around a lot of other balloons. In Saga in Japan you get hundreds of balloons in the sky at the same time, and usually you’re fine because everyone is aware. Now and again, however, you’ll get someone go up or down past you really quickly with their head buried in their computer, completely oblivious to what’s going on around them. For me the tech is just an aid to flying and navigation  — as soon as I can see my target or landing spot I tend not to use it anymore and just fly by instinct.” 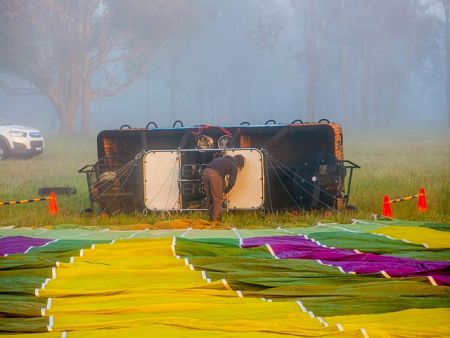 “It rained really heavily during a couple of flights in Canowindra, but fortunately by the time water started pouring down the outside of the envelope into the basket I had had a chance to put my laptop and GPS away. This is the second competition where I’ve flown in heavy rain, as the same thing happened at the Women’s Worlds, so I’m thinking I’m going to have to add some kind of waterproof material to protect all of my gear.”

With the demands of full time commercial ballooning combined with the periodic stress of competing in world-level competition, I asked Nicola if she still enjoys ballooning or it has just become a job.

“I love ballooning as much now as when I started. When I’m flying passengers the first five minutes after my alarm goes off feels like a job, but I just think I’m so lucky to be able to do this every day. You know that with commercial flights you can take off and land at the same places five days in a row and have five completely different flights. I enjoy the challenge of flying big balloons, and I really get a lot of enjoyment from talking to my passengers. I mean, almost every flight I’m introducing someone to ballooning for the first time, and I get to share in that joy.”

When she’s not winning world championships and raising well-behaved offspring, Nicola runs Balloon Aloft Hunter Valley with her husband Matthew. They fly all year round (weather dependent) and the Hunter is a lovely place to fly.

Thanks again to Nicola for her time, and good luck in the National Championships.

Like what you read? John’s books are now available on Amazon and Kindle. For about the price of a cup of coffee you can take a journey deep into the disturbed psyche behind columns including Screen Themes, Think For Yourself, New Music Through Old Ears and JT on NXT. There’s supernatural thriller Damnation’s Flame, action/romance Reaper, black comedy City Boy and travel guidebook Bar Trek: Europe. Check them out! 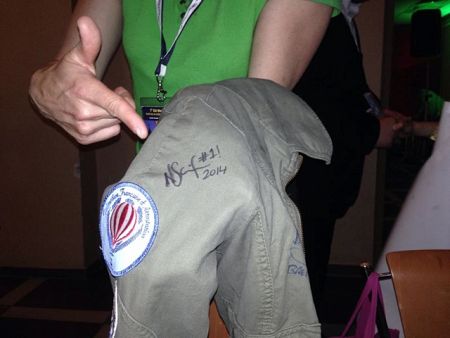