The killer cop and the murder of Donald Mackay

THE SLIM volume and cover of Dr John Jiggins’The killer cop and the murder of Donald Mackay lead one to think that you are about to embark on a racy thriller.

But this book is much more than that and is one of three in a series that Dr Jiggins has written, which derive from his original research and doctoral dissertation, ‘Marijuana Australiana: Cannabis Use, Popular Culture and the Americanisation of Drugs Policy in Australia 1938 -1988‘.

Apart from his own research, Jiggens has drawn on the work of a lot of other people to weave together the facts and the story about criminal behaviour surrounding the trafficking of drugs, particularly marijuana, in Griffith and Sydney in the latter half of the last century.

I lived and worked in Sydney during some of this period and a lot of the players were familiar through media reports and committees of enquiry, but this book relentlessly chronicles the perverse criminality of the time — police corruption and the rise and fall of the Nugan Hand Bank etcetera. 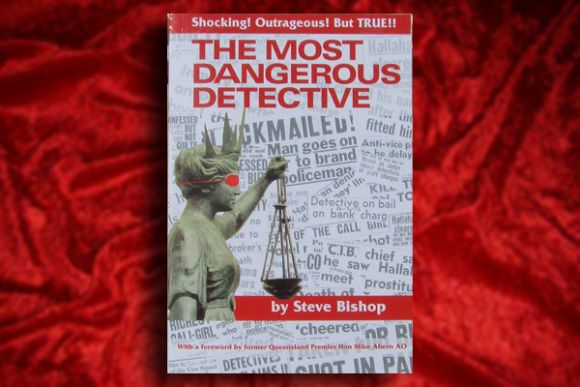 However, it also describes the corrupt behaviour of the Central Intelligence Agency and some of its former operatives – even retired senior American defence personnel – in the sourcing and distribution of drugs to and through Sydney for U.S. consumption. It notes their malign influence on the Australian Government and internal affairs at the time.

While we in Australia would like to assume that we have the necessary tools to combat or ameliorate against the worst features of drug culture, one is left with a niggling doubt about whether we are sufficiently armoured against the predations of rogue elements from abroad — particularly our largest ally, given its previous history in South East Asia and South America.

‘The Killer Cop and the Murder of Donald Mackay’ is available from Diversity Books for $30.40 (paperback) RRP.

The killer cop and the murder of Donald Mackay