Screen Themes — This is The End vs The World’s End

Entertainment editor John Turnbull looks at two recent movie releases and ponders the state of Hollywood in the twenty-first century. 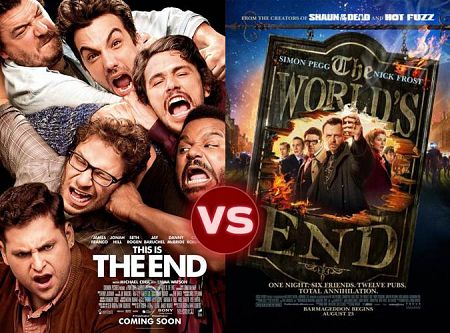 IT HAS BEEN SAID there is no such thing as an original idea in Hollywood.

This is, of course, bollocks when you consider films like Only God Forgives and Inception, but does speak to a trend towards intellectual laziness among the bigwig movie execs that green light new projects.

A major marker of this trend is what is known as the Dante’s Volcano effect, wherein two almost identical films go into production at the same time and neither studio is willing to back down.  The typical result of this effect is that both films make less money than one would have alone, as cinemagoers wonder what all the fuss is about volcanos/time travel/talking birds.

This week, we take a look at two comedies themed around that most hilarious of premise — the end of the world.


This is The End

Written by the team of Seth Rogen and Evan Goldberg (Superbad), This is The End stars a whole bunch of recognizable actors playing twisted versions of themselves.  Stars Rogen and Jay Baruchel are joined by a huge cast including James Franco, Jonah Hill, Rihanna, Craig Robinson, Danny McBride, Michael Cera, Emma Watson and Channing Tatum.

The road to Armageddon starts with Canadian Baruchel arriving in LA to spend the weekend with his old – and far more successful – friend Seth Rogen. After a night of playing video games and smoking large amounts of weed, Rogen drags an unwilling Baruchel to a party at James Franco’s house.

Most of the film is set at Franco’s house (which he designed himself, of course) and features all of the excess you’d expect to see at such a bash — including an image of Arrested Development’s Michael Cera that will change the way you look at him forever.  Halfway through the party, all of the decent people on earth get Raptured (yes, it’s a biblical apocalypse) which of course leave the celebrity party untouched and unaware that the end of the world is going on right outside the door.

Eventually, the truth manages to trickle through the haze of drugs and egos, and the core group of partygoers are left to fend for themselves as the supporting cast is killed off in interesting and amusing ways. The special effects at this point are pretty great, particularly considering the film reportedly only cost $32 million to make.

Based on the short film Jay and Seth vs the Apocalypse, This is The End relies heavily on you knowing the actors and the films that they’ve been in. One of the running gags later in the movie is that the surviving cast decide to make a sequel to Pineapple Express — which is very funny, but slightly less so if you don’t know what the hell they’re talking about.

By no means a highbrow comedy, the laughs in This is The End come from how far actors like Franco, McBride and Cera are willing to push the envelope while ostensibly playing themselves. The movie is almost begging for a drinking game to go along with it — something to look forward to for the DVD release…

Directed by Edgar Wright and starring the team of Simon Pegg and Nick Frost (along with a not quite as recognizable supporting cast including Paddy Considine, Eddie Marsan and Martin Freeman) The World’s End is about a group of old friends who get together to complete an unfinished pub crawl from their youth.

Much darker from a character perspective than This is The End, this film suffers from having an almost terminally unlikable lead character — a feat that I would have considered impossible from an actor like Simon Pegg. An oblivious alcoholic who hasn’t grown up since he left school, Pegg’s Gary is a complete asshole with few redeeming qualities — chief among which is the ability to skol a pint of beer in under five seconds.

The third film in Wright and Pegg’s Cornetto Trilogy, The World’s End isn’t as good as Hot Fuzz, which in turn wasn’t as good as Shaun of the Dead. Some fans would argue that none of the movies are as funny as the TV series Spaced, which first brought Wright, Pegg and Frost together.

Despite this appearance of diminishing returns, there are still some good points to The World’s End. The relationship between the gang is well handled, with mistakes and throwaway comments from years earlier coming back to haunt them. Nick Frost shows more range and subtlety than he has before, particularly in the moving scene where he describes why he hasn’t had a drink in sixteen years. Paddy Considine is solid as ever, and former Bond girl Rosamund Pike is good in a small but pivotal role.

The major downside, however, is that this comedy isn’t particularly funny.

With a reported production budget of GBP £20 million (about USD $35 million) The World’s End doesn’t look anywhere near as good as This is The End.  Special effects are Dr Who level hokey and the small town setting makes the whole film feel a little cheap — like something a bunch of mates might have filmed over a few weekends and edited in their spare time.

I went into This is The End expecting a crude comedy with lots of stars and a few laughs, and my expectations were confounded. I walked into The World’s End looking forward to the conclusion of a fondly held comedy trilogy and found myself disappointed.

Neither of these movies will be for everyone, but if you’re in the mood for some apocalyptic comedy, I’d recommend This is The End— if only for the enduring image of Emma Watson with an axe: