SUBSCRIBE   DONATE LOGIN SHOP
SUBSCRIBE   DONATE
Albanese's Voice to Parliament referendum should be a no-brainer
Be progressive, Albo, don’t implement Stage 3 tax cuts
The Morrison circus is over but the mainstream media must go on
Get a Mark David T-shirt!
New Treasurer sets cracking pace on chasing foreign tax cheats
Film and drama

This week, entertainment editor John Turnbull takes us for a look at Zack Snyder’s Superman, Man of Steel, and a love letter to stupidity and muscles in Michael Bay’s Pain & Gain. Minor spoilers may appear throughout, although nothing you couldn’t get from watching the trailers or reading the occasional comic... 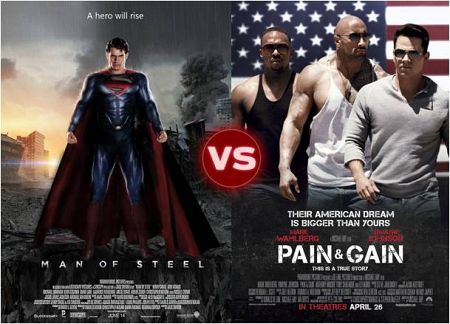 When Zack Synder was announced as director for the latest Superman reboot, the geek community responded with cautious optimism. He had good comic book pedigree, with previous films 300 and Watchmen both based on best selling graphic novels.

Fan hope grew stronger when Henry Cavill was cast as Clark Kent, a quality British actor who had maintained an increasingly weary nobility through four seasons of The Tudors. After the plodding disappointment that was Superman Returns, could Man of Steel be the Superman movie that we’ve all been waiting for since Superman 2 back in 1980?

Well, yes and no.

Man of Steel is in some ways a remake of Superman 2, featuring Kryptonian nutbag General Zod as the main villain. This is a nice contrast to Superman returns, where the main villain was a giant rock.  Back in 1980 Zod was played with camp intensity by Terence Stamp.  In 2013, character actor extrordinaire Michael Shannon takes over the role, and does so with scenery chewing gusto.

Australia’s own (at this point) Russell Crowe does a great job of reinventing Jor-El as a street fighting man of action, making Marlon Brando look somewhat impotent as the genius scientist who didn’t think to build an escape rocket big enough for three people.

Kevin Costner is somewhat less successful as Pa Kent, but only because the script makes him into a bit of a tool, really. When teenaged Clark saves a bus full of his drowning school friends, good-ol Pa tells him that he should have let them die. Later on (spoiler) he basically makes Clark watch him die rather than use his powers to save him. Seriously, dick move, Pa Kent.

The film does a pretty good job at taking Superman into the ‘real world’— the same real world that is inhabited by Batman, who will be co-starring in the Man of Sequel. Some critics have complained about the extended period that Clark spends wandering the earth doing good deeds, wearing a beard and looking like a really buff Jesus, but this is typical character building stuff and grants fans multiple opportunities to see Cavill with his shirt off.

Unfortunately, the biggest problem with Man of Steel comes in the third act, which degenerates into a mindless fight scene. While this makes for great popcorn entertainment (for a while) the wanton destruction completely misses the point of the Superman character. Only at the end of the movie does Supes go out of his way to save human lives, which seems somewhat ironic considering the hundreds of thousands of people who would have been killed as he and Zod level most of Metropolis.

Still a far better movie than Superman Returns, purists will argue that Man of Steel lacks the heart of the Christopher Reeve originals and it’s hard to disagree. One can only hope this is the first step on a journey towards greatness, the way Iron Man was the first step on the way to the Avengers.

Directed by Michael Bay, Pain & Gain tells the story of three bodybuilders who embark on a crime spree driven by vanity, greed and outright stupidity. Mark Wahlberg plays Danny Lugo, a personal trainer obsessed with his pecs and the inspirational advice of guru Johnny Wu, played with typical restraint by Ken Jeong. Along with sidekicks played by Anthony Mackie and Dwayne ‘The Rock’ Johnson, Lugo comes up with a plan to kidnap and extort a crime lord named Victor Kershaw, played by Tony Shaloub, channelling his inner scumbag.

Bay’s previous films include Armageddon, Bad Boys and the Transformers trilogy — the enjoyment of which was dependent on your ability to check your brain at the door. Pain & Gain is a little better, only due to the fact that all of the events are based on a true story — a fact which the film reminds you of on multiple occasions, as if this is enough explanation for the shallow motivations and moronic actions of the central characters.

Wahlberg plays Daniel Lugo, the brains behind the operation (such as it was) — as naive, morally flexible and dumb as a hammer. Anthony Mackie has a little more depth as second banana Adrian Doorbal and benefits from a relationship to Australia’s Own Rebel Wilson, who has fun in an underwritten role. Ed Harris plays the generic ex-cop role that could be filled equally well by James Caan or Tommy Lee Jones, and the ever-sarcastic Rob Corddry has some nice moments as gym owner John Mese.

Standout is former wrestler Dwayne Johnson, who brings a depth and pathos to ex-con man-mountain Paul Doyle, who spends the film vascillating between his religious calling and his ultra-violent tendencies. The man occasionally known as The Rock once again shows his leading man charisma, demonstrated in early films like Be Cool and Welcome to the Jungle, as well as in more recent action flicks like Fast Five and Snitch.

While Pain & Gain is fun at times, it is not a particularly good movie.  At almost two and a half hours, it’s way too long. None of the characters are particularly likeable, and there’s not enough subtext (or even text, for that matter) to make the buffoonery interesting. If you want to see buffoonery with subtext, check out lesser Coen Brothers classics Burn After Reading and O Brother Where Art Thou.

Man of Steel is not a bad film, but it suffers from an excess of wanton destruction and pales in comparison to the Nolan Batman trilogy. By the same token, it is Citizen Kane compared to Pain & Gain, which had the potential to be a biting satire of modern American greed, but turns out to be a love letter to narcissism and stupidity.

See Man of Steel, if only to support the road to the Justice League. Avoid Pain & Gain unless you really like watching dumb people working out and hurting each other.