Director, writer and podcaster Kevin Smith is a passionate man. Over his career he has directed 11 movies, ten of which he also wrote, starred in a number of unsuccessful TV pilots and produced countless hours of material in service of his Smodcast podcast network.

A little over 20 years ago, a young Kevin Smith borrowed money from his family and maxed out his credit cards to spend just a little over $27,000 making a black and white comedy called Clerks. Starring a cast of unknowns, including Smith himself as half of drug dealing dynamic duo Jay and Silent Bob, Clerks was witty, profane and laugh-out-loud funny.

Spawning an animated TV series, comic books, a half-decent sequel – with another in pre-production – Clerks was the tinder that set Smith’s career alight, attracting a legion of fans that remained loyal to him for many years to come. It is these loyal fans who have allowed Smith to re-invent the movie distribution process, eschewing traditional film marketing for a more personal Q&A style approach and also allowed him to build a network of weekly podcasts that rivals early adopters Adam Carolla and Nerdist Industries.

Set over the course of a single day in a convenience store, Clerks chronicled the lives of register-jockeys Dante and Randall, the yin and yang of retail dogsbodies. Dante, played by Brian O’Halloran, was downbeat, resentful of his status in life and borderline depressive; while Randall, Jeff Anderson, was a bristling ball of sarcasm, ready and willing to dispense insults to co-workers and customers alike.

Inspired by Richard Linklater’s low budget 1991 film Slacker and filmed at night at the Quik-Stop where Smith worked at the time, Clerks struck a minor chord with moviegoers but really took off on home video. Essentially just a series of extended conversations, the movie tackled topics seldom before discussed on screen, including oral sex, transsexualism, necrophilia and Star Wars.

Due to limitations in the budget, a key scene from the script was cut during filming, as Smith and producer Mosier couldn’t afford the location fees to shoot at a local funeral parlour. The excised scene was released in comic book form by Oni Press a few years later as Clerks: The Lost Scene.

A year past the film’s 20th Anniversary, Clerks has aged well. The picture quality still isn’t great, there are no decent female roles and some of the supporting cast are embarrassingly bad (Walt Flanagan) but it’s still as funny as hell.

Oh and it has a great dance sequence…

Tusk may well be the first movie ever based on a podcast, inspired as it was by Smodcast #259. It may also be one of the worst movies I’ve ever seen. And I’ve seen A Serbian Film and Black Knight.

Starring a recognisable cast including Justin Long, Johnny Depp, Michael Parks and Haley Joel Osment, Tusk tells the tale of an arrogant podcaster who is abducted by an unhinged serial killer and transformed into a walrus.

Justin Long plays lead character Wallace Bryton as an unlikable douchebag who hosts a weekly podcast called the Not See Party – which is frequently confused for the Nazi Party to little comic effect – accompanied by partner Teddy Craft, played by creepy man-child Haley Joel Osment. Wallace travels to Canada in search of people to make fun of, eventually drawn into the web of superficially friendly but obviously deranged storyteller Howard Howe, played with scene-chewing relish by Michael Parks.

As Howe drugs Wallace – via one of the most obvious scenes imaginable – and begins his surgical transformation of Wallace into the blubbery mammal of his dreams, the movie is beset by plot holes, conveniences and outright contrivances. With none of the creeping dread found in the body-horror films of David Cronenburg or Clive Barker, Tusk takes a potentially interesting concept and flushes it straight down the toilet with lazy writing, poor directing and phoned-in performances.

Possibly the most baffling performance comes from Johnny Depp, who seems to have given up his challenging early-career roles for endless Pirates sequels and dross like Transcendence. Playing French-Canadian detective Guy Lapointe, Depp mumbles and slurs his way through a couple of Smith’s trademark monologues that probably sound better on paper than they do in real life.

It is possible that Depp’s presence can be explained by the fact that his daughter Lily-Rose plays a small role in Tusk as a Canadian convenience store clerk, alongside Smith’s daughter Harley Quinn. The pair step up to take the lead roles in Smith’s next film Yoga Hosers, in which Depp senior reprises the Guy Lapointe role.

There is a chance that Tusk will hold some appeal for fans of Smith’s podcasts, specifically the original Smodcast (with Scott Mosier) and Hollywood Babble-On (with Ralph Garman). Wallace’s ringtone is the ‘more margarita’ jingle from HBO, and podcast partner Ralph stars as Canadian detective Frank Garman, a reference to fans getting his name wrong during early episodes.

Despite the relatively poor reception that Tusk has received at the box office and via video-on-demand (VOD), Smith has repeatedly stated that this is the first in a Canadian horror trilogy, including the recently completed Yoga Hosers (also based on a podcast) and the upcoming Moose Jaws — described as a remake of the Spielberg classic, but with a moose rather than a shark.

Rating: 2/10 — a vaguely interesting twist near the end can’t save this from the $2 bargain bin. 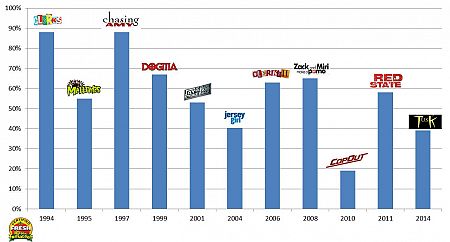 Anyone who had the misfortune to see either Jersey Girl or Cop Out knows that Smith is more than capable of making a bad film, particularly when he’s not involved with the writing and/or working with a notorious dick (Bruce Willis).

Despite the apparent decline in quality of his movies, Kevin Smith remains a creative workhorse, appearing on at least five podcasts each week, including Jay and Silent Bob Get Old, alongside on-screen hetero life partner Jason Mewes. While varying somewhat in quality – particularly after Smith releases a movie to lower than expected box office – many of these podcasts are worth a listen, particularly for fans of his early work.