Screen Themes — Edge of Tomorrow vs X-Men: Days of Future Past

This time round, entertainment editor John Turnbull takes a look at two new movies featuring the tricky concept of time travel. Does Tom Cruise go back in time and become his own father? Read on to find out…

For those who like an easy, one line sound bite [Fox execs, I’m looking at you], Edge of Tomorrow could be described as Groundhog Day meets Starship Troopers starring one of the most famous actors in the world.

Based on a manga comic called All You Need is Kill, Edge of Tomorrow tells the story of Major William Cage, a former advertising exec who joined the marines as a press officer to avoid active duty. Due to a display of smarmy arrogance (which Tom Cruise portrays particularly well) Cage is busted down to private and sent into battle encased in a powered exo-skeleton that he has no idea how to use — and then promptly gets killed.

When Cage wakes up again twelve hours earlier he is confused and essentially relives the same day, but lasts a few more seconds in battle before getting horribly killed. And then he wakes up again…

Edge of Tomorrow feels a lot like a video game, with each life spent learning a little more about the game world, allowing the player to live a little longer and explore a little deeper. Some of Cage’s deaths are downright hilarious, particularly the moment he is running frantically for his goal and is wiped out by a random passing truck…

While the time-loop concept isn’t a particularly new one, director Doug Liman handles the structure well, retaining enough familiar beats to reinforce the repetition of time, but introducing enough fresh information each time to keep the story moving along. A wildly inconsistent director, Liman showed early talent with films like Go and The Bourne Identity, then proved he could also make absolute drivel with releases like Jumper and Mr & Mrs Smith. Edge of Tomorrow should be considered a return to form, but the $240m+ (so far) global box office is probably thanks to one man – Mr Tom Cruise.

Putting aside whatever you may think of Cruise and his wacky beliefs, the man is a bona fide movie star. On what many would consider the wrong side of his fiftieth birthday, Cruise remains one of the most bankable movie stars in the world, and is more than convincing playing an action hero. Accompanied by a decent support cast, including Emily Blunt playing against type as an alpha warrior nicknamed Full Metal Bitch, Bill Paxton and Australian Kick Gurry, Cruise takes the ludicrous concept and makes it his own.

The movie sags somewhat during the second act, but returns for a barnstorming finish. If you have the ability to turn off (or at least turn down) your brain, Edge of Tomorrow provides a highly entertaining thrill ride.

X-Men: Days of Future Past

Based on the graphic novel written by Chris Claremont and John Byrne, Days of Future Past is widely regarded as one of the best X-Men stories ever told. Set across two time periods, the book tells the story of how Wolverine travels to the past to prevent a mutant holocaust perpetrated by giant robots called Sentinels.

Directed by series originator Bryan Singer and starring a cast of Oscar winning actors, Days of Future Past should be the best X-Men movie hands down. So why isn’t it?

Quality actors like Patrick Stewart and Ian McKellen are sidelined for their younger selves, played with varying degrees of success by James McAvoy and Michael Fassbender.

McAvoy makes a sullen an unlikable Xavier, happy to give up his mutant power for the chance to walk again. By comparison, Fassbender chews the scenery as young Magneto, almost sympathetic in his portrayal of a persecuted minority before a mid-film switch to full-blown psychopath.

Jennifer Lawrence puts in another star-making performance as Mystique, the morally flexible shapeshifter who becomes an unwitting harbinger of mutant destruction. A buff Hugh Jackman is underused in his role of Wolverine, basically standing around and flexing while other characters spout exposition, while Juno’s Ellen Page brings an unexpected depth to her portrayal of Shadowcat.

Where the movie falters is when it tries to add a layer of serious social commentary to the proceedings. Game of Thrones star Peter Dinklage plays anti-mutant Senator Trask, and his racist allegory wranglings with congress slow the pace of the movie considerably.

While Captain America: The Winter Soldier managed to combine Cold War politics with a solid action movie, Days of Future Past can’t quite pull off the same trick. For about half an hour in the middle the movie stops being entertaining, saved only by the spectacular appearance of a somewhat contested character: Quicksilver.

Played here by American Horror Story actor Evan Peters, Quicksilver is the son of Magneto in comic book canon. The issue arises that Marvel studios want to use Quicksilver as well, and included him in a recent post-credit cameo played by Kick Ass star Aaron Taylor-Johnson. 20th Century Fox own the X-Men, and have so far refused to share their toys with the broader Marvel Universe.

What happens next? Only time will tell…

Let’s face it, you’ve probably already made your mind up if you want to see either of these films — but here’s my two cents, brought to you free by the generous folks at IA: I’d recommend Edge of Tomorrow as a popcorn film with enough laughs and action to keep the average moviegoer entertained.

If you’re a fan of comic book movies, Days of Future Past is up there with X-Men and X-Men 2 in terms of quality; not as good as Avengers or Dark Knight but a hell of a lot better than X-Men: The Last Stand or Daredevil…

In terms of time travel, Edge of Tomorrow keeps things tighter by restricting the travel to a single day, where certain things are outside of the hero’s control. By sending Wolverine back fifty years, Days of Future Past opens up far more plot holes and room for movement. I mean, why not try again in a few years?

Last, but not leas, and from a pure geek perspective, Days of Future Past loses serious points for not including the ‘fastball special’ along with this iconic image (spoilers for a 33 year old comic book)… 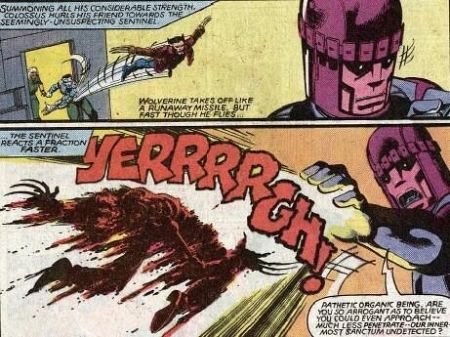