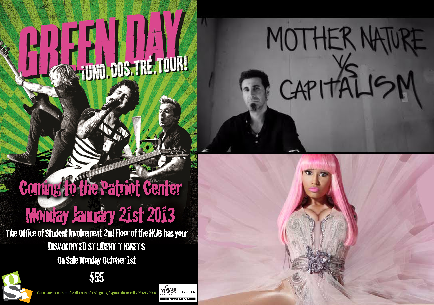 "I used to be with it, but then they changed what “it” was. Now what I’m with isn’t “it” and what’s “it” seems weird and scary to me."
~ Middle-Aged Grampa Simpson

As we grow older, it becomes easy to pick a period of music you like and declare that everything since that particular golden age has been rubbish.

Anyway, here is some new music for you to listen to.

When pop-punk stalwarts Green Day announced that they would be releasing three complete albums in late 2012, many people wondered what they were on.

Shortly after the first album was released, the answer to this question was revealed when singer Billie Joe Armstrong checked into rehab. Despite this slight misstep, the album release schedule went ahead as planned, with the release of Tre even being moved forward to compensate fans for the cancelled tour.

The three albums differ significantly in tone (as much as that is possible with Green Day), with Uno reflecting the arena rock modern, mature Green Day, Dos bringing back the garage rock influences of side project Foxboro Hot Tubs, and Tre returning to the band’s southern California punk roots.

Best lyric: I taste the cigarettes and liquor on your breath. We used to call it speed but now it’s crystal meth. (Ashley from Dos)

Verdict? 8/10. Definitely worth a listen if you’ve ever liked Green Day. If you only buy one album, get Dos.

Serj Tankian is better known as the lead singer of prog-metal band System of a Down.  This is his third solo album, after the relatively successful Elect the Dead and the decidedly odd Imperfect Harmonies. Not afraid to buck tradition, Tankian’s second album was accompanied by the a full Jazz orchestra, which sounded not quite as good as you might expect.

By contrast, Harikiri is a poppy album with a strong Wham influence.  No, I’m just kidding.  It’s heavy, lyrically dense and highly political.  Songs lurch and change direction without warning, and Tankian seems to have an odd obsession with being sodomised (by repetition, by the world, by the media etc...). Probably not an album to listen to when the kids are around.

Best lyric: I abhor the whore who calls herself reality TV (Reality TV)

Verdict: 7/10. Not as inventive or challenging as a System of a Down album, but still very listenable.


Album that I think will Probably Suck Review

Before I started this review, all I knew about Nicki Minaj was that she was a judge on American Idol, and had released a horrible duet with Justin Bieber.  According to Wikipedia, she released her first mix tape in 2007 and her first album (this one) in 2010, then set a record for having seven singles in the Billboard Hot 100 at the same time. That means that she is meant to be a credible judge of new talent with between three and six years experience in the music business (depending on whether you consider releasing a mixtape experience).

On listening to Pink Friday, it becomes apparent how Minaj managed to get so many singles on the chart at the same time — almost every track features a big name artist. Eminem shows up on Roman’s Revenge to spout his usual sexist, homophobic drivel, and will.i.am continues the Black Eyed Peas habit of stealing a catchy hook from an 80’s hit (this time the oh wah oh from Video Killed the Radio Star) and basing a whole song around it (Check It Out).

If you like this sort of thing, you will probably like Nicki Minaj. I, for one, do not care for it.

Best (and I use the term advisedly) track:  Blazin’ (featuring Kanye West)

Verdict? 1/10. Sucks even more than I thought it would.