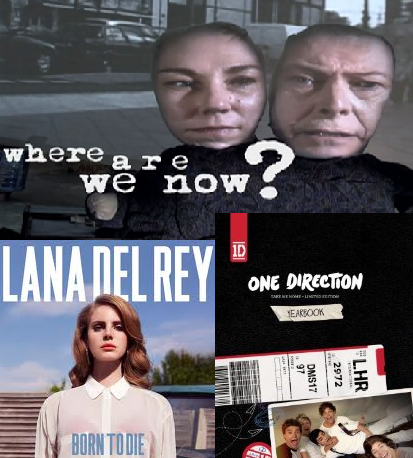 BACK BY POPULAR DEMAND (not really) here is the next thrilling instalment of New Music Through Old Ears, where I will do my best to find gold within the wasteland that is modern music.


New Single by an Old Artist

David Bowie – Where Are We Now?

"Is David Bowie still alive?" I hear you ask, through the magic of the internet.

The answer is yes, my friend. Bowie is still alive and still making music, an impressive 45 years after releasing his first single The Laughing Gnome back in 1967.

Since changing his name from David Jones (to avoid confusion with the Davy Jones from The Monkees, not the department store), Bowie has re-invented himself time and time again. From androgynous alien Ziggy Stardust, to the still somewhat androgynous Thin White Duke, David Bowie defines musical reinvention.

Now 66 years old, Bowie is releasing what may be his final album.

The first single is Where Are We Now, a typically downbeat Bowie number packed with German references that hark back to his Berlin Trilogy (Low, Heroes and Lodger). Not many popular songs reference Potsdamer Platz and mega department store KaDeWe, which may or may not be a good thing.

Verdict? 7/10. Bowie is still producing interesting music at 66. Kudos to you, Bowie.

In a lot of ways, Lana Del Ray owes a debt to David Bowie.

Born Elizabeth Grant in 1986, she was sent to a strict boarding school to deal with her heavy drinking at age 14, went to university to study metaphysics at 18 and released a couple of independent albums to little fanfare a couple of years later.   Then she changed her name to Lana Del Ray and hipsters of the world embraced her. Unshaven men in pork pie hats and ironic piercings declared Del Ray the second coming.

Then she appeared on Saturday Night Live, released an album through Interscope (this one) and started getting mainstream attention — so the ‘cool’ people turned on her.

One famous review from The AV Club called the album


'shallow and overwrought, with periodic echoes of Ke$ha...’

Fortunately, hipster reviews don’t really matter at this point, as Born to Die has sold over 3 million copies worldwide.

The album itself is immaculately produced indie pop, with strong echoes of Nancy Sinatra. First single Video Games was accompanied by a grainy, seedy video clip (directed and edited by Del Ray) which was widely credited with pushing the single to mass awareness.

Best track: Off to the Races


Album I’m pretty sure is going to suck

About a minute into Live While We’re Young (the first track on the album) I wonder if this column may not have been such a good idea.

Am I going to have to review something this bad every freaking time?

Little Things is a perfect example. In this sappy ballad (that not even my wife can listen to, and that’s saying something) our clean cut troubadours promise that they will love every part of you, even the bits that you hate. It’s a song that sounds like it was written by a group of men in their forties, listing all of their teenaged daughter’s insecurities.

Best song: Doesn’t really apply to an album like this. Tracks are pretty much interchangable.