This week, it’s all about the metal, with entertainment editor John Turnbull bringing us new albums from the former bassist for Metallica, the former singer for Pantera, and a bunch of blokes who really like kung fu movies… 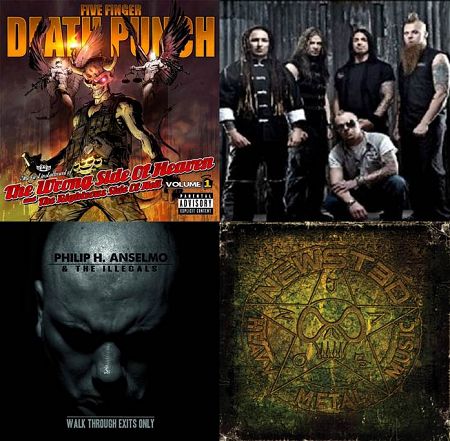 New Album by a newish Artist

It has often been said that you can’t tell a book by its cover. This is not necessarily the case with heavy metal albums, as illustrated by The Wrong Side of Heaven, the fourth album by Five Finger Death Punch. Looking at this cover, I expected heavy riffs, lyrics obsessed with Satan and a strong potential for rocking out. And do you know what? I was totally right.

Formed in California in 2005 by martial arts fans Zoltan Bathory and Jeremy Spencer, Five Finger Death Punch built a cult following driven by a solid touring schedule. 2009 album War is the Answer was released to positive reviews, and the band continued to tour across the US and around the world — often as part of major festivals such as Rock Am Ring and the Mayhem Festival.

New album Wrong Side of Heaven shows a band confident in their style and willing to experiment a little — to varying degrees of success. Title track Wrong Side of Heaven hits all of the classic metal beats, both from a musical and iconographic standpoint. What is a metal song without demons, I ask you? On the other end of the scale is a cover of Mama Said Knock You Out, which wasn’t really that good a song when it was originally performed by LL Cool J.

First single, Lift Me Up features Rob Halford from Judas Priest, and is a cracking old school metal number. Watch You Bleed shows a strong groove metal influence, You has a strong death metal vibe and, for the eighties hair metal afficionados, there’s even a power ballad called M.I.N.E. (End This way). On the downside, now and again the singer sounds like that tool from Creed.

As the album progresses, some of the tracks descend into stock metal riffing, but there is usually enough variety within songs that you’re not going to hate anything completely (unless you don’t like heavy metal, in which case this column might be a bit of a disappointment. Sorry.)

Best tracks: Lift Me Up, Watch You Bleed, M.I.N.E.

Sample lyric: ‘I spoke to God today, and She said that She’s ashamed...’ (Wrong Side of Heaven)

Back in the early days of this column, I reviewed the Metal EP by Newsted. At the time, I gave the EP 7/10, which might have been a little generous due to having just listened to Ben Harper. Six months later (give or take), Newsted have released their first full length album, aptly titled Heavy Metal Music.

From a purely technical standpoint, Heavy Metal Music represents a development from Metal — in that it has more words in the title as well as more songs on the album. The musicianship remains polished, if somewhat unremarkable, and the lyrics are pretty much what you expect — war, extinction, pestilence and cute little kittens. Just kidding on that last one.

Inevitably, when a member leaves a successful band (a la Robbie Williams) or is thrown out (hello Ozzy Osbourne) everything they do after that will be compared to their former glories. Newsted succeeds from the perspective that this new album doesn’t sound very much like Metallica — it’s closer in bloodline to the speed metal of Motorhead or Mudvayne.

There isn’t a huge amount of variety on Heavy Metal Music, as if anything less than a full sonic barrage shows that you’re not trying hard enough. The same cannot be said for the cover art, which takes the ‘vaguely satanic symbol’ approach on a mottled background. Compared to Five Finger Death Punch, it’s little underwhelming.

It’s unlikely that Heavy Metal Music will attract any new fans to the genre, but that’s probably not the point. For metalheads looking for something new, it’s definitely worth a listen.

Sample lyric: ‘A simple meaning, to a simple plan, the temple gleaming, keep fooling man.’ (Above All)

Philip H. Anselmo & The Illegals — Walk Through Exits Only

Back when he was simply known as Phil, Mr Anselmo used to be the lead singer for a band called Pantera. He wasn’t the first lead singer (that was Terry Glaze) and he’s not the one who will be remembered as an amazing talent who died before his time (that would be Dimebag Darrell, gunned down on stage in 2004) but he was certainly there.

Not to underestimate Anselmo’s  contribution to the history of metal, however; he is responsible for some great angry metal songs (F**king Hostile, Five Minutes Alone, Cemetary Gates) and is a good object lesson to children of why it’s a bad idea to get a head tattoo.

During the 90’s, Anselmo became estranged from Pantera as he self-medicated a back problem with heroin and the band eventually broke up in 2003. Brothers Vinnie Paul and Dimebag Darrell went on to form the ill-fated Damageplan, while Anselmo devoted himself to side projects such as Down and Superjoint Ritual.

Times passed as it has a habit of doing and, suddenly, it was 2013. Anselmo has a new album with a new band, with the unstated potential to bring something fresh to the somewhat stale world of heavy metal music. Does he succeed?

No he does not.

Walk Through Exits Only is an album with limited appeal. The music is straight ahead thrash with little variation and the vocals are delivered in a monotone growl. If you were a fan of Pantera and have recently gone deaf, you may like this album, but everyone else is shit out of luck.

Somewhat amusing song titles like Music Media is My Whore and Usurper Bastard’s Rant promise far more than they deliver, while title track Walk Through Exits Only is hilarious in an entirely unintentional way.

With a few notable exceptions, the best metal bands have a sense of humour about themselves. This can go a little too far (Steel Panther) but having flashes of light just makes the darkness more effective. As evidenced by the use of his big boy name, Philip H. Anselmo does not have much of a sense of humour.

Sample lyric: ‘Everybody ruins music… not just me.’  (Walk Through Exits Only)