New Music Through Old Ears: Monsters fall out of Beiber

The man who listens to crappy music so you don’t have to, John Turnbull, reviews Fall Out Boy, Of Monsters and Men and (god help us) Justin Beiber. 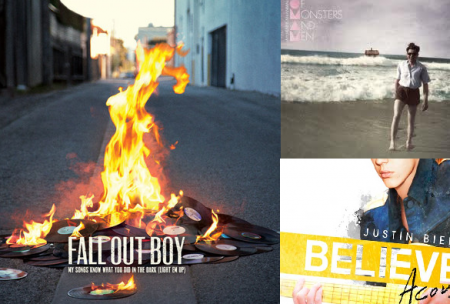 Fair warning! It’s going to be an angry column this week. I’m listening to a song by a pop-punk band that had no business re-forming, an album by the third most famous band from Iceland and last, and certainly least, the musical equivalent of sticking my face in a fan — Justin Bieber.


New Single by a Re-forming Artist

I’m slightly embarrassed to admit that I used to like Fall Out Boy. Someone recommended From Under The Cork Tree to me when it first came out and I thought it was serviceable pop punk. Some of the song titles were a bit long and mastubatory, but the hooks were good.

Then Pete Wentz got famous for some reason and suddenly FOB were massive and had spawned a legion of soundalikes competing to see who could have the longest and most ridiculous song title (I’m looking at you, Panic! At the Disco). They released a couple more albums with songs that talked about how much it sucked to be famous (This Ain’t a Scene, It’s an Arms Race, Fame < Infamy) and then broke up just as people started not to give a crap.

Lead singer Patrick Stump released a solo album that proved he was a fair singer but a terrible songwriter, Pete Wentz had a child with Ashlee Simpson that he called Bronx Mowgli (I shit you not!) and the other two blokes did something else which I’m not going to research because we’re talking about fucking Fall Out Boy, here.

Now they’re back together and they’ve released a new song, which sounds a lot like every other song they ever released. It’s a bit poppy, with a generous helping of cheese, and a hook catchy enough to guarantee radio play for three weeks until everybody gets sick of it. The lyrics are vaguely self aware but not as witty as FOB think they are, and the title would have been a lot better if they’d stuck with the last few words — they’re repeated no less than seventeen times during the song.

Sample lyric:  You’re the antidote for everything except for me...

Of Monsters and Men – My Head is an Animal

Here’s a brain teaser for you: name three successful musical artists from Iceland.

Everyone knows Bjork. And you can’t say The Sugarcubes because that’s basically the same answer.  Hipsters will namecheck Sigur Ros, but even those bearded fonts of obscure knowledge may struggle to come up with a third Icelandic superstar.

It’s probably not time to add Of Monsters and Men to that list yet. Debut album My Head is an Animal is vaguely catchy folk rock, made slightly more interesting by the vocal mix, with every song essentially sung as a duet between frontpeople Nanna Bryndis Hilmarsdottir and Ragnar Porhallson. The band refer to their roles as co-lead singers, which is cute in a Scandinavian sort of way.

I don’t want to classify Of Monsters and Men as a one hit wonder just yet, but it wouldn’t be too surprising to see them filling a chart position alongside Bobby McFerrin and The Buggles in ten years. History will be the judge.

First single Little Talks was instantly catchy, but in a way that became annoying after about half a dozen listens. By the time it came in Number 2 on this year’s JJJ Hottest 100 most people were sick of it. Follow up single Dirty Paws relies on the exact same ‘Hey!’ hook as the first song — which seems an odd choice, to say the least.

Latest single King and Lionheart is accompanied by a gothic video sure to appeal to fans of illicit substances, but the accompanying song is generic in an Angus and Julia Stone day sort of way.

Verdict:  3/10 Probably not all bad if you like folk rock, I suppose.


Album I’m Pretty Sure is Going to Suck

It’s time to make a confession. I do not like Justin Bieber. I only had to hear Baby Baby Baby once and it was too many times. From the little I have read about him in the gossip rags, he seems to be a bit of a douche.

Still, that does not mean all of his music has to suck. Does it? I mean, look at Russell Crowe. He can be a bit of a tool at times but his music is... ah. Never mind. Bad analogy. At least Rusty is a good actor, and bold with the facial hair.

I appreciate that I’m not really the target market for Bieber’s particular brand of I-Can’t-Believe-It’s-Not-Music, but then again I’m not a lesbian and I still like Tegan and Sara so I’m not sure that’s relevant. Good music is good music, and in my humble opinion Believe Acoustic is not good music.

It’s a little hard to review this album as the songs are so forgettable that every track fades from memory before it’s even finished. Bieber has neither the voice nor the guitar skills to carry off an acoustic album (he’s no Eric Clapton, that’s for sure), and most of the songs are pretty much interchangeable.

One standout track is Beauty and a Beat, which manages to be even worse than the original despite not featuring Nicki Minaj. Across the album, the lyrics range from simplistic to asinine – Yellow Raincoat sounds like it was written by someone who thinks Yellow Submarine was the Beatles best song.

All in all this is a terrible album that I would not recommend to anyone, even Justin Bieber fans.

Sample lyric:  I put on my raincoat / my yellow raincoat / you know exactly why. (Yellow Raincoat)

Verdict:  1/10. If I was a religious man, I would consider this penance for my sins.

That’s it for this week. I’ll be back with something listenable next week, I promise. And remember — I listen to this crappy music so you don’t have to.