SUBSCRIBE   DONATE LOGIN SHOP
SUBSCRIBE   DONATE
How we prevented a Morrison dictatorship
How Howard screwed the Libs
U.S. site tries to ruin what makes fairy bread great
Bloody Idiot of the Week — Episode 28: Get used to it
Morrison's 'politics of retribution'
Music

This time around in New Music through Old Ears John Turnbull reviews one of the best albums of the year and one of the absolute worst. 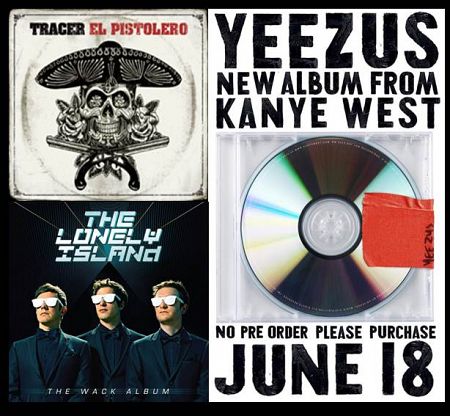 IT'S TIME AGAIN to listen to some new music.  This week we’ve got some high quality rock from Adelaide, some passable comedy hip-hop from LA and some atrocious rap from one of the world’s biggest tools.

New Album by a Newish Artist

Tracer are a three piece rock band from Adelaide. They’ve been together for almost ten years. With El Pistolero they break out of the pub scene to announce themselves as a major player in the Aussie hard rock game.

With inspiration from classic Aussie hard rock acts ranging AC/DC to the Divinyls, Tracer treat the ‘inspired by’ bit with the right amount of reverence, using the music of their youth as a jumping off point rather than slavishly aping every beat and rhyme (hello, Oasis).

Tracer had a moderate hit back in 2011 with Devil Ride, a decent song backed up with a professional looking video that couldn’t quite hide the fact that two-thirds of the band look more than a bit like Hanson.

Dual vocalists Michael and Leigh Brown (formerly of The Brown Brothers, the blues band rather than the wine label) are joined by drummer Andre Wise to make up that rare beast — a three piece group that rock out like a much bigger band.

Title track El Pistolero is a catchy number with immediate appeal, and kicks off an album full of proper heavy rock music. Blues licks are combined with soaring vocals reminiscent of early Soundgarden, anchored by a tight rhythm section. I could be wrong, but the song (and indeed the entire album) appears to be inspired by El Mariachi, the cult classic movie directed by Robert Rodriguez.

Production is kept simple and to the point, with no auto-tuning in sight. The only complaint I would make is that the rhythm section sound curiously muted for the first few tracks, but this problem disappears well before the barn-storming Manic For Ya, one of the best rock songs I’ve heard in the last five years.

Last but not least, the quality of the CD packaging deserves special mention.  With a cool fold out cover and booklet with lyrics and liner notes, El Pistolero is a musical package made with creativity and vision.

Sample lyric: ‘And he shoots and explodes, and he’s out of control, taking back what they stole, the man they call Pisolero.’ (El Pisolero)

New Album by a Comedy Artist

The Lonely Island – The Wack Album

The Lonely Island are a comedy trio that also sing.  Wait ... maybe sing isn’t quite the right word. Made up of Saturday Night Live alumnus Andy Samberg, Jorma Taccone and Akiva Schaffer, The Lonely Island write humourous hip hop numbers that sometimes turn out to be catchy as hell.

Unfortunately, The Lonely Island suffer the same problem as comedy acts through the ages — once you’ve heard a joke song a few times, it’s not as funny anymore. Sure, Joe Dolce’s Shaddap You Face is a cringeworthy classic, but you don’t want to listen to it more than once a year.

Like most rap/hip hop albums these days, collaborations are the norm, and The Wack Album features guest spots from T-Pain, Lady Gaga,  Solange (Beyonce’s sister) and the ever-present Pharrell Williams, who will literally do anything for a million dollars. First single YOLO features Adam Levine from Maroon 5 and Kendrick Lamar.

Standout tracks (by which I mean songs worth listening to more than once) include the literate Semicolon and the catchy I Run NY (featuring Billie Joe from Green Day). Any time a guest actually sings it tends to lift the track above the standard shouty white-guy rap that dominates most of the album.

Album I think will Suck

Few people would dispute the assertion that Kanye West is a bit of a tool. A short list of his accomplishments:

- Interrupted the proudest moment in a 17 year old girl’s life with the inspired words ‘I’m-a let you finish, but...’

He has also released a number of catchy tunes over the years including All of the Lights, Jesus Walks and Stronger. He was also responsible for introducing Jamie Foxx to the world as a singer, which is unlikely to be viewed as a positive thing from a historical point of view.

New album Yeezus reflects the status that Kanye bestows upon himself — inspired, divine, and second only to the big man himself (for now). This attitude seems in inverse proportion to his talent for writing a catchy tune, which seems to be at an all time low. Gone are the inspired beats of previous hits, replaced by random shouting and constant abuse of auto-tune.

In his self-appointed role as saviour of his people, Kanye takes his lyrics in some interesting directions. New Slaves attacks people who willingly submit themselves to fashion and the latest corporate trend — a message that would be slightly more effective if Kanye weren’t wearing a gold chain the size of a garden hose.

As a counterpoint to the excellent Tracer CD package above, Yeezus has no front or back cover, just a crappy little sticker. This makes the album look like a data disc, which seems strangely appropriate considering the quality of the music contained within. This album is not good, except as a testament to what a gigantic wanker Kanye West is.

Sample lyric: ‘I just talked to Jesus, he said What Up Yeezus? I said: shit, I’m chilling, trying to stack these millions.' (I Am A God)

Verdict: 1/10 — almost completely unlistenable. If Jesus exists, he doesn’t care how much money you have, douchebag!