In this edition, entertainment editor John Turnbull reviews albums by two metal stalwarts and one band that probably should have given it away years ago. 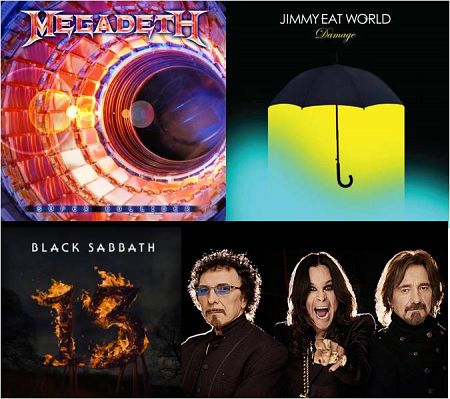 To many people, Megadeth frontman Dave Mustaine is better known as the bloke who got kicked out of Metallica for being a drunken clown just before they broke huge. This is unfortunate, because he’s a legitimate metal legend in his own right. Since their formation in 1983, Megadeth have released 14 studio albums, played thousands of concerts, gone through over 20 band members, sold over 50 million records and are name-checked as part of metal's ‘Big 4’ along with Metallica, Slayer and Anthrax.

While Megadeth have never had what you would call a hit, they’ve released some iconic songs over the years including In My Darkest Hour, Hangar 18, and the classic Symphony of Destruction.

Part of the reason behind the lack of chart success is Mustaine’s refusal to slow down – Megadeth don’t do ballads. While Metallica brought metal to the mainstream with power ballads like Nothing Else Matters and One, Megadeth added another riff and played faster and louder.

Unfortunately, this ‘faster is better’ attitude means that Megadeth albums from the last 30 years are pretty much interchangeable – one sounds pretty much like the next. Shockingly, this does not appear to be the case with new album Super Collider.

From the opening track Kingmaker, through to the killer title track, Super Collider introduces light and shade in quantities heretofore unseen on a Megadeth release. Don’t get me wrong, you’re not going to mistake this for the pop scrotum, but there is definitely some variety on display.

Lyrically, Super Collider covers territories familiar to Megadeth fans – politics, war, religion and the imminent collapse of society. It’s when they move into the realm of science that things get a bit dodgy. Mustaine clearly has no idea what a Super Collider is – they don’t actually explode, genius…

It seems that Dave Mustaine has finally moved on from being bitter about being thrown out of Metallica, which is a good thing because there have to be better things to do with your time than hating Lars Ulrich.

Sample lyric: ‘On the high road, I will take you higher, til the world explodes, just like a super collider’ (Super Collider)

Verdict: 7/10 — better than anything Metallica have done lately. The hologram CD cover is also cool.

A few weeks ago I reviewed God is Dead?, the first single from this album. I liked the song, giving it 8/10 and I stand by that decision. Does the new album live up to the strength of the single?

Produced by uber-producer Rick Rubin, 13 is actually the 19th studio album by Black Sabbath and features original members Ozzy Osbourne, Tony Iommi  and Geezer Butler. Drummer Bill Ward must have invested better than everyone else, as he has chosen not to be involved in this particular reunion.  He is replaced by Brad Wilk from Rage Against the Machine, who has a long history of playing very loudly behind a ground breaking guitarist and a shouty outspoken political activist.


It’s somewhat remarkable that after years of drug abuse, being married to the anti-christ and feeling responsible for unleashing offspring Kelly and Jack onto the world, Ozzy Osbourne can still rock out with the best of them. Maybe it was the blood transfusion he got from Keith Richards last Christmas, but Ozzy hasn’t sounded better in years.

13 kicks off with a classic Sabbath slow burn, the eight minute plus armageddon epic End of the Beginning. The end of the world theme carries through the rest of the album, with tracks like Zeitgeist and Methademic passing savage commentary on the generation that grew up listening to songs like Paranoid and War Pigs on classic rock radio.

As usual, Rick Rubin does a good job of making the band sound like they’re playing live, keeping the studio trickery to a minimum. No Cher style auto-tuning here, thank you very much.

Sample lyric: ‘Hallucinating in a chemical hell, ain’t my idea of having fun.’ (Methademic)

Jimmy Eat World are a four piece band from Arizona. While some people believe that the band name was inspired by the group’s religious beliefs (the band name acronym is JEW), the official story is that it came out of an insult between one of the band member’s younger brothers. This may be the most interesting thing about Jimmy Eat World, who are in the running for the title of Most Generic Pop-Punk Band of All Time.

Back in 2001, Jimmy Eat World had a mid level hit with pop punk ditty The Middle. Most people agreed that this was a very nice song, and hence it was used in movies, ads and TV shows whenever a wholesome and hearty good time was in the offing.

The problem was that this chirpy track seems to be the ultimate expression of Jimmy Eat World’s hopes and dreams. Every song that they’ve released since then (Damage included) either sounds like The Middle or tries to mimic the sound of other successful pop-punk bands — this track sounds like Green Day, that one sounds like The Offspring, the next sounds like a less-witty NOFX.

There is hardly a remarkable song on Damage and, on the first run through, I wasn’t able to choose a single track that I’d want to add to a playlist. Not a good sign...

First single I Will Steal You Back is a fine example. An inoffensive song overall, with hints of Neon Trees and Nickelback, it fades from memory before the final note peters out.

I’m sure that Jimmy Eat World will have a long and comfortable career playing festivals and nostalgia tours, but based on this album I’m not sure I’d ever pick up another one of their albums.

Sample lyric: ‘I only pick a fight I’m sure to lose, so how can I not hold my hope for you.’ (I Will Steal You Back)