Another mixed musical bag from tuneful old John Turnbull, who reviews new music by the Eels, Alex Watts and Dido. 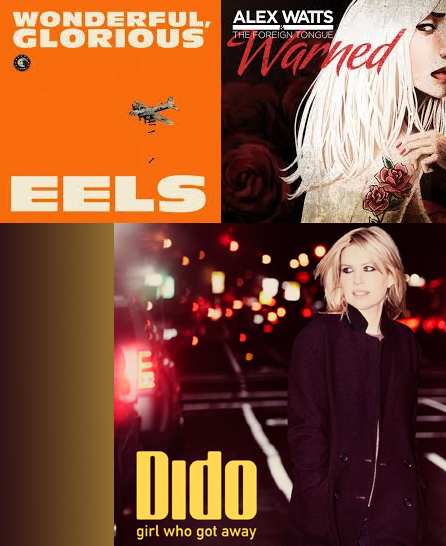 Mark Everett, better known as E, is not a happy chap. He’s not quite as unhappy as Elliot Smith (who was so unhappy he decided to end it all) but he’s probably slightly more unhappy than that bloke from Radiohead who’s always whining about something or other, despite the fact that he made millions of dollars essentially giving away their music for free.

Eels have been releasing albums since back in 1996, when Beautiful Freak hit the streets. Featuring tracks like Novocaine For the Soul and Susan’s House, the album was marked by dark, intelligent lyrics and accomplished musicianship, with most of the instruments played by E himself.

Follow up album Electro Shock Blues was written in the wake of his sister’s suicide and his mother’s diagnosis with cancer, and was filled with depressing yet hauntingly beautiful songs.

Apparently, E’s life got better for a while, which resulted in Daisies of the Galaxy, a comparatively upbeat disc with songs like Tiger in my Tank and I Like Birds suggesting a new outlook on the world.  Perhaps best of all was the hidden track Mr E’s Beautiful Blues.

Subsequent albums followed this pattern — mercilessly self-deprecating, with recurring themes; mental health, his dysfunctional family, failed relationships and the countless mistakes he has made throughout his life.  Oh, and boxing (Bus Stop Boxer, Prizefighter, On the Ropes).

New release Wonderful, Glorious has a good mix of introspective tracks and rocking moments, with standout tracks including Peach Blossom and New Alphabet (the first single).

Sample lyric: Deep down in the cold ground, such a sad place to be, but I’ll be fine (I am Building a Shrine)

Verdict: 9/10 — another excellent album from Eels that rewards repeat listens. Buy it and listen to it twice.

Apparently Alex Watts used to be in a band called Dirty Sanchez. It’s not clear whether this band was named after the Jackass-lite comedy troupe or the possibly apocryphal sex move, but either way it’s not a great name.

At some point Alex decided to change the band name to Alex Watts and the Foreign Tongue, which joins diverse acts like Smokey Robinson and the Miracles and Lars Fredericksen and the Bastards in the ranks of bands with lead singers who like their name so much they put it in the title.

Third single (as far as I can tell) Wanted is a catchy rock number with a fair dollop of country influence. It’s got a menacing vibe with hints of The Libertines and Kings of Leon, with some nice harmonies and a hook that stayed in my head for hours after listening. It’s not a perfect song, with an off-kilter patch in the middle and a bit of self indulgent drumming at the end, but it’s definitely worth a listen.

A side comment on lyric videos; it’s all well and good to offer full visibility your lyrics to the scrutiny of the world (unless you’re Justin Beiber, maybe) but it’s probably a good idea to get someone to check your spelling and punctuation first.

Sample lyric: All their warning signs are only written in the dust

Dido — Girl Who Got Away

Oh, Dido. I had such hopes for you. Sure, you were always a bit on the mellow side for my tastes, but you had a beautiful voice and an ear for a catchy tune (White Flag, Hunter). Now you just make me sleepy.

Born with the excellent name Florian Cloud de Bounevialle Armstrong, Dido borrowed her stage moniker from the Queen of Carthage, and received early exposure singing with her brother Rollo’s band Faithless. Her big break came when Eminem sampled her song Thank You on the track Stan, which also featured Dido sitting on the toilet, which has to be absolutely the best way to be introduced to American audiences.

After the massive success of her first two albums, Dido sort of settled into a groove (or a rut, depending on your perspective). Her music was nice, sort of bland and safe for listening around elderly relatives. This new album does little to challenge that paradigm, and is basically eleven songs to doze to.

Like most of Dido’s songs, first single No Freedom is about relationships. Apparently Dido likes a bit of freedom in her relationships. Which is fair enough, I suppose. It’s not a particularly great song, but at least it won’t stick in your head like one of those annoying One Direction songs...

Verdict: 4/10 — not actively horrible, but may be unsafe to listen to while driving.