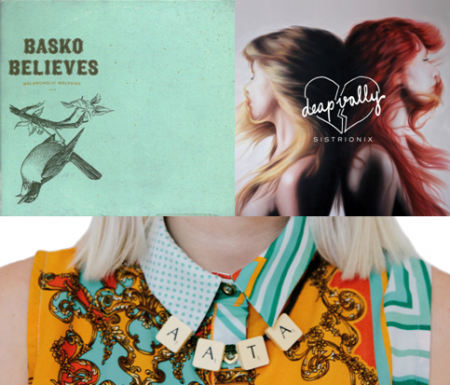 THIS WEEK, we're checking out three new artists who you probably haven’t heard of — unless you’re a pretentious hipster like me). We’ve got a Scandinavian troubadour called Johan, a quirky Brisbanite called Astrid and two young White Stripes fans called Lindsey and Julie.

Let’s hear what they’ve got to say, shall we?

Born in the small town of Falkenburg in Sweden, Johan Orjansson grew up listening to English and American folk rock and eating pickled herring.  He spent four albums recording laid back country/folk music under his own name before reinventing himself as Basko Believes.

Melancholic Melodies is a virtual ‘best of’ Johan Orjansson, with songs taken from these earlier albums, stripped back and reinterpreted. It’s pretty mellow stuff, with enough Scandinavian quirk to make the country aspects of the album listenable.

If you’re a fan of artists like Angus & Julia Stone or Jeff Buckley, you could do worse than checking out Bask Believes – it’s mellow gold, man.

Best tracks: August Makes Me Cry, If I Were to Love You

Sample lyric: ‘Feeling like a small child, waiting on a blue sky…’

Led by charismatic singer Astrid Jorgensen, Astrid and the Asteroids formed in Brisbane in 2011.  Playing a mix of rock, funk and soul, the 6 piece band have built up a strong live following and released their first EP Horoscopes in 2012.

New single West End represents a leap forward for the band, with a combination of slick production and a professional looking video. Lyrically, the song takes a shot at Brisbane hipsters – you know the ones – cooler-than thou types who drink organic juice and don’t wear shoes.

Taking the piss out of hipsters isn’t exactly difficult, so the challenge that AATA face is keeping things interesting. Fortunately, they combine clever lyrics with a serious earworm — this song will be going around in your head for hours.

Astrid and the Asteroids are yet another great Australian band that you can get out and watch live — always the best way to listen to new music. Check out their website for upcoming shows.

Sample lyric: ‘Give me organic tea, please make it soy for me…’

Deap Vally are a two-piece band which formed in Los Angeles in 2011 when Lindsey Troy met Julie Edwards in a crochet class. Despite the Nana Mouskouri image that this suggests, Deap Vally actually make raucous indie rock influenced by the White Stripes and Led Zeppelin.

When I say ‘influenced by the White Stripes’, I mean ‘competing  with the Palma Violets to see who can sound more like the White Stripes’.  First single Gonna Make My Own Money is a perfect example — it sounds like an offcut from Get Behind Me Satan.

Once you get past the White Stripes influence, however, it becomes evident that Deap Vally have a lot of talent. Sistrionix has enough light and shade to keep things interesting, and for a two piece band they certainly make a lot of noise.

Second single End of the World catches the ladies partying like rock stars — drinking bourbon, falling over and watching the sunrise. Oddly enough, this behaviour seems somewhat authentic, particularly when compared with the desperate shenanigans of artist/celebrities like Ke$ha.

While Deap Vally aren’t quite ready to join the pantheon of famous two piece bands inhabited by The White Stripes, Black Keys and Death From Above 1979, they’re definitely a band to watch as they put their influences in the right place and find their own distinct sound.

Best tracks: End of the World, Six Feet Under, Woman of Intention

Sample lyric: ‘Come on and take a breath now, cause life’s too short and the drumming’s exhausting.’ (End of the World)