This week John Turnbull take us for a listen to a pair of Canadian lesbians, an African American bisexual, and a bunch of heavy metal nerds. It’s like the United Nations! 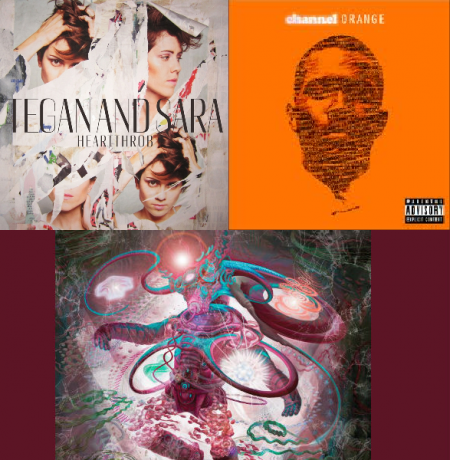 Tegan and Sara are a pair of identical twins from Calgary, Alberta. If your geography is a poor as mine, I’ll help you out by adding that this is in Canada, eh. They recorded their first demo albums when they were still at school and released their debut album Under Feet Like Ours in 1999. Back then, they sat comfortably on the indie side of the indie/pop line, a trend that continued through subsequent releases The Business of Art (2000) and If It Was You (2002).

Somewhat ironically, it was a cover version by another breakout indie artist that gained Tegan and Sara wider acclaim, when The White Stripes covered Walking with a Ghost from the fourth T&S album So Jealous. Their fame grew even further when punk band NOFX released the song Creeping Out Sara, written about the time lead singer Fat Mike tried to pick up the openly gay Sara (or possibly Tegan) at a festival in Germany.

With new release Heartthrob, Tegan and Sara have stepped nimbly over the indie/pop line and released a full-on pop album. And do you know what? It’s pretty damn good.

First single Closer climbed to number 3 on the American Billboard chart, the highest position that the band have ever achieved. Unfortunately, this is not a cover of the Nine Inch Nails song of the same name, although that would be awesome.

Other standout tracks include the autotuned-but-still-good I’m Not Your Hero and the poignant yet ridiculously catchy breakup song Now I’m All Messed Up. Definitely worth a listen if you like well crafted pop music, not so good if you’re one of those weirdos who doesn’t like twins.

Sample lyric: I never walked the party line / Doesn’t mean that I was never afraid (I’m Not Your Hero)

Frank Ocean does not like Chris Brown. On this topic, he and I agree. Chris Brown is a woman-beating asshole. To add to this, he and Ocean got into a ‘beef’ over a parking spot, which resulted in a brawl between their ‘possies’ and Brown calling Ocean a faggot.

This might not sound like such a big deal in the stupidly macho world of R&B, but Chris Brown had been trying to paint himself as a reformed man rather than the misogynistic, homophobic tool that he really is. It didn’t help Brown’s case when Ocean came out a few days later, revealing that he was in fact bisexual.

Some pundits have speculated that this coming out was timed to maximise publicity around the release of his album Channel Orange. Whether this is true or not kind of misses the point that Ocean is one of the first openly ‘out’ rappers (along with chart topping Macklemore) marking a significant shift in a hip-hop culture that has long glorified sexism and homophobia.

But what does the music sound like? Good question. It sounds ... a bit like Chris Brown, to be honest. I’ll be the first to admit that I’m not the biggest fan of the musical style formerly known as Rhythm and Blues, and Channel Orange does little to change that opinion. Some of the tracks have interesting and somewhat insightful lyrics (Crack Rock, Bad Religion) and single Thinking Bout You has a deliberately weird, horror movie inspired clip, but still...

Sample lyric: I could never make him love me (Bad Religion)

Coheed and Cambria — The Afterman: Descension

By all rights, I should like Coheed and Cambria. They play heavy metal, and I like heavy metal. They do concept albums with science fiction plot lines, and I’m a card-carrying sci-fi nerd. They even have a comic book to help you make sense of what the hell is going on, and I’ve been reading comic books since I was a kid.

But up to now, they’ve pretty much sucked for me. I first tried listening to Coheed and Cambria about six years ago, when they released the album Good Apollo, I’m Burning Star IV, Volume 2: No World For Tomorrow (yes, that’s what the album is actually called). As the title may suggest, this was the second half of the fourth chapter of an ongoing sci-fi epic. Perhaps this is why the music sounded like complete wank to my ears, but it wasn’t enough to make me give up hope.

A couple of years later (back in the halcyon days of 2009) they released Year of the Black Rainbow, which was apparently a prequel to The Second Stage Turbine Blade (their first album, released back in 2002). There was some interesting stuff going on, but none of the songs were particularly catchy, so the album just sort of faded from my attention.  After all, Limp Bizkit released an album that year!

To be honest, I skipped 2012’s The Afterman: Ascension because it was all getting a bit too hard. To get the full Amory Wars story at this point you had to listen to six concept albums, read a comic book series and a full length novel, which seemed too big a commitment to appreciate a metal album.

With the release of The Afterman: Descension, I decided to give Coheed and Cambria one more try. It’s new music, after all, and that’s what this column is all about.

If I had to guess what was going on, I’d say that this chapter of the Amory Wars is set some time in the 1980s, which would explain the frequent use of synths and Bronski Beat style choruses (Number City). Other tracks follow the more traditional earnest-metal style common to earlier Coheed and Cambria albums, such as Dark Side of Me, which isn’t a bad song if you’re a Goth looking for a bit of a downer.

Overall it’s not a terrible album, but probably isn’t going to convert many people who aren’t already Coheed and Cambria fans.

Sample lyric: There is no weight that can bury us / Beneath the ghosts of all my guilt (Dark Side of Me)

Verdict:  6/10 — Interesting enough to listen to a second time, although perhaps not a third.