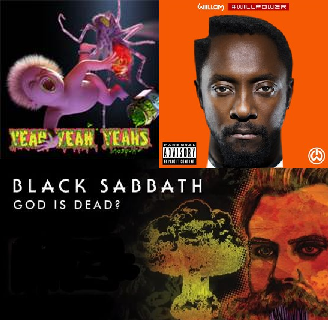 Yeah Yeah Yeahs have been around since 2000, when vocalist Karen O joined guitarist Nick Zinner and drummer Brian Chase. Three years later, they released their debut album Fever To Tell, a challenging, punky album marked by jangly guitar and yelped vocals. The lead single was the hauntingly beautiful Maps and the album was named by hipster music mag NME as the fifth best album of the decade.

With expectation around the band growing rapidly, second album Show Your Bones built on the success of Fever To Tell. Influences such as Joan Jett and Siouxsie and the Banshees continued to play a strong role in song structure, with bigger hooks, more experimentation and a run of hit singles including Phenomena, Gold Lion and Cheated Hearts.

Around this time, Karen O became something of a fashion icon, which some critics argue detracted focus from the music. Indeed, follow up releases Is Is (2007) and It’s Blitz! (2009) lacked the urgency of previous albums, despite the strong performance of single Zero.

After a few years on the road and a slew of side projects, Yeah Yeah Yeahs have released new album called Mosquito. Is it any good? Yes and no. There are a couple of standout tracks, including Despair and Buried Alive, but overall the songs are missing the raw, primal appeal that separated Karen O and friends from the middle-of-the-road pack. Lead single Sacrilege illustrates this perfectly — it’s a good song, but there’s something undefinable that stops it from being a great song…

Sample lyric: They’re hiding underneath your bed, crawling between your legs, they’re sticking it in your vein… (Mosquito)

Verdict: 6/10 — to quote Regurgitator ‘I like your old stuff better than your new stuff.’

Do you remember the Seventies? Ozzy Osbourne doesn’t. During this decade he was the lead singer for Black Sabbath, regularly took his body weight in drugs and married Sharon Osbourne. One of these things was an exceptionally bad choice.

Along with Led Zeppelin and Deep Purple, Black Sabbath are one of the bands credited with inventing Heavy Metal. From 1968 to 1978, Ozzy Osbourne, Tony Iommi, Geezer Butler and Bill Ward produced some of the most iconic and memorable metal songs ever recorded, with standout tracks including War Pigs, Sabbath Bloody Sabbath, as well as this classic:

In 1979, Ozzy was fired from the band for being a drugged out mess, and replaced by singer Ronnie James Dio. A couple of years later Dio left to form his own band and was in turn replaced by a conga line of singers, including Ian Gillan from Deep Purple, Glenn Hughes (not the guy from the Village People), Ray Gillen (no relation to Ian Gillan) and Tony Martin (not the bloke from the Late Show).  The original lineup reformed for the inevitable, ‘We’re Out of Money Tour’ in 1997, and enjoyed each other’s company so much that it only took them another 16 years to record some new music…

New single God is Dead? (note the question mark) is a return to form for Sabbath, with dinosaur heavy riffs and thunderous drumming accompanied by some remarkably coherent vocals from Ozzy.   Apparently inspired by 9/11, the lyrics deal with God’s place in modern society, and even ends up on a somewhat positive note as Ozzy repeats ‘I don’t believe that God is dead…’  (Sorry, spoiler).

Sample lyric: ‘Who do you trust when corruption and lust, creed of all the unjust, leaves you empty and unwhole?’

Verdict: 8/10 — pretty bloody good. Hopefully they’ll be able to keep this up for an entire album.

William Adams is one of life’s little anomalies — an individual who does great (often unrecognised) work in one field, but gets famous for his populist (but exceedingly crappy) work in another field. A great example of this is Phil Collins, who used to be the drummer in Genesis back when Peter Gabriel was in the band and they were actually sort of cool, but is famous for being a singing drummer responsible for some of the sappiest songs of all time (and one admittedly awesome drum break).

In this case, will.i.am is a regular and generous contributor to science education, yet has polluted the airwaves for years with the simulation of music produced by the Black Eyed Peas. It’s an interesting phenomenon that a single Black Eyed Peas song is acceptable in a party context, but more than two in a row is akin to sticking electrified skewers in your ears. For the record, this is one of the slightly more acceptable ones...

A prolific collaborator, will.i.am has produced tracks with artists from Michael Jackson to Nicki Minaj, and has stolen hooks from artists as diverse as Dick Dale (Pump It), Daft Punk (Boom Boom Pow) and Tone Loc (My Humps). This trend continues on #willpower (and what the hell is the deal with the hashtag? Does he really want us to refer to the album as Hashtag Willpower?) with collaborations, including Jennifer Lopez, Alicia Keys, Chris Brown, David Guetta and Britney Spears.

Scream & Shout is a prime example of what’s wrong with this album. The track itself is highly auto-tuned, vaguely inoffensive dance pop, with Ms Spears doing a weird approximation of an English accent — with the exception of the controversial Britney bitch line, which appropriately enough sounds phoned in.

Unsurprisingly, one of the worst tracks on the album is the collaboration with pop scrotum Justin Bieber #thatPOWER (more bloody hashtag nonsense) which goes back to the well and rips off the exact same Daft Punk song that he did for Boom Boom Pow. What’s wrong, will.i.am? Running out of catchy hooks to steal?

Best track: Geekin’ — sounds terrible, but at least the lyrics are clever.

Sample lyric: Check me out, I’m an engineer, a mathematician, technician and a visioneer, a scientist, the motherfucking nerd… (Geekin’)

Verdict: 3/10 — made worse by the fact that it will probably get lots of radio play.