IN CASE YOU’RE NOT FAMILIAR with Joe Bonamassa, here is a truncated history.

Born in New York in 1977, Joe developed a love for the guitar through the music of Cream, John Mayall’s Bluesbreakers and Irish bluesman Rory Gallagher. By the time he was 12 years old he was an accomplished musician, invited to open for the legendary BB King. Since then, Joe has released ten solo studio albums, eleven live albums, nine video albums and two collaborations with Beth Hart, which included a blistering cover of the Etta James classic I’d Rather Go Blind.

There is something about the ambience of the State Theatre that lends an air of class and authenticity to whatever is happening onstage — although I notice that Chelsea Handler is playing here soon, so that may just be confirmation bias.

By the time my companion and I arrive at the historic venue most of the crowd is already seated and waiting in anticipation for the band to appear. The audience is mostly made up of well-heeled adults, although one couple made the dubious choice to bring along their four year old son, who may or may not be a blues fan but still demanded to leave half way through because he was tired.

I take it as a good sign when there are seven acoustic guitars on stage and The Eagles don’t appear as the opening act. This impressive collection of axes allows Joe the luxury of opening for himself, playing two sets in one night with two different support bands. 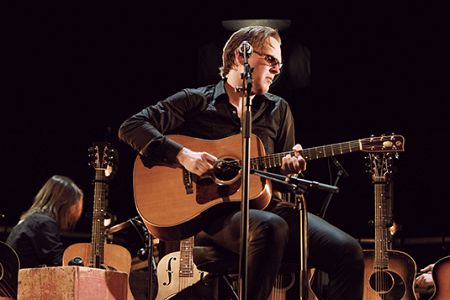 The first set of the night was acoustic, supported by a collection of accomplished players including Gerry O’Connor on fiddle and mandolin, Mats Wester on the Swedish keyed fiddle and Lenny Castro on percussion. This was the same backing band that supported Joe on the CD/DVD release An Acoustic Evening At the Vienna Opera House and their chemistry on stage was immediately apparent.

With Joe seated and relaxed, chatting with the audience between songs, the vibe was mellow and respectful. The band performed songs from throughout Joe’s 28 year career, including standout tracks Black Lung Heartache and Dislocated Boy.

After a short intermission, Joe returned to the stage with his electric band, featuring Carmine Rojas on bass, Tal Bergman on drums and Derek Sherinian from Black Country Communion on keyboards.

This incarnation of the band took things up a notch, providing a solid ground for Joe’s guitar virtuosity.  Once again taking tracks from throughout Joe’s discography, the standout for me was a soaring performance of the Ballad of John Henry that had many in the well-dressed crowd on their feet.

The only downside for this reviewer is something endemic to both Blues and Jazz — it encourages a fair amount of self-indulgence. While I’m sure longtime fans enjoyed the two and three minute guitar solos that occurred during the electric set, I must admit they left me cold. Sure, it’s impressive that Joe can play really fast right at the bottom of the fretboard, but to my ears it didn’t add anything to the songs.

Despite this very minor gripe, I really enjoyed both incarnations of Joe Bonamassa and his band and would recommend catching one of his shows if you get the chance.