Independent Australia: Thanks for your time today, Colin.

There is a beautiful acoustic version of Down Under on Putumayo Presents Australia — how did you get involved with Putumayo World Music?

Colin Hay: They contacted me through Compass Records, the label I’m signed with. The guy who runs Putumayo had heard this acoustic version that I recorded a few years ago and decided that it needed to be included on the record.

IA: The original version of Down Under was recorded over thirty years ago, and become an iconic Australian song — do you have any idea how many times you’ve played it?

CH: I was thinking about this earlier, and I really have no idea. Many thousands of times, without a doubt.

IA: It’s one of those songs that tends to break out in pubs and sporting events around the world — anywhere there's a group of Aussies. Has that ever happened in your presence without the crowd realising you were there?

CH: It’s happened many times, but one time I remember was at the World Cup in Munich [Ed: in 2006]. In the stadium there along with about sixty-six thousand Australians. Anyway, the song came on and everyone started singing along, then this guy in the row in front of me turns around with a kind of confused look on his face and said: "How does that work, then?"

IA: Down Under was the subject of a court case following an unfortunate question on Spicks and Specks — did this colour the way you feel about the song?

CH: No, I’ve had a lifelong relationship with the song, which is really independent of anything like court cases. My love with the song remains intact.

IA: Have you heard of Pareidolia? It’s basically a result of the human tendency to recognise patterns, even when none exist. It struck me that this is exactly what happened with your song. You didn’t rip off the melody from the Kookaburra song — audience members noticed a superficial similarity and started whistling the original melody.

CH: Yeah, it really had nothing to do with the song. It was just about opportunism and greed.

IA: Are you doing much touring at the moment?

IA: Do you remember the first album you bought?

CH: I was very privileged growing up, because my mother and father had a music shop in Scotland. So I used to not so much buy albums as listen to them in the shop. I was very lucky in that sense.

The first album that I remember looking at and loving dearly was With The Beatles.

IA: Were the Beatles a significant influence when you started writing music?

CH: Pretty much. The Beatles, The Kinks, The Rolling Stones, The Who and all of those British beat bands — they were the ones that really made an impression on me when I was still in Scotland.

When I moved over to Australia, my brother broadened my musical taste to include a lot of soul music, like Booker T & the MGs. It was very mysterious music to me, very alluring. But I took inspiration from a lot of different places and I still do.

New music is in the air, you know?

IA: What’s the most recent album you bought?

CH: Well … piracy has always existed. People have always lent people albums or made a tape for their friends, but it’s just a lot more prevalent now.

But I think that a lot of people realise that a lot of blood, sweat and tears go into creating whatever art is being made and artists should really be paid for what they do. I think it’s very difficult and the world is still trying to work out how to make that possible.

As technology changes, I think people may not even want to own music any more, just be happy to rent it or stream it.

All in all, I think if people are going to steal that way the least they can do is wear a white frilly shirt…

IA: Hah. And a parrot on the shoulder.

Before we finish up I’d like to ask about your accent. You moved from Scotland to Australia when you were sixteen, yet to me you still sound pretty bloody Scottish. Do your Scottish friends and family think you sound Australian?

CH: Oh, no. They think I have an American accent. I’ve been living there for about twenty four years.

IA: I can’t imagine Down Under sung with an American accent. Thanks very much for your time today, Colin. 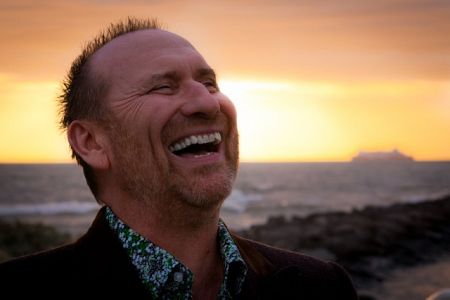