There are at least ten different types of tattoo, according to John Turnbull, and all of them were on display at this year’s Soundwave music festival in Sydney. 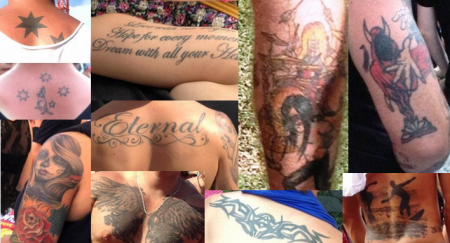 Part 2: The (Body) Art of Soundwave

ACCORDING TO the American Journal of Dermatology, there are five types of tattoo.  The first type is traumatic tattoos, which result from scarring from injury with a coloured material like ashpalt or lead from a pencil. These would probably not be considered tattoos by anyone but the most literal. The second type is amateur tattoos, the type you might find in prison or in your dodgy mate’s back shed. As the name implies, these are not done by a licensed tattooist and are generally of poor quality.

The third type of tattoo (at least according to the skin doctors) is a professional tattoo, a definition which covers the majority of ink seen in this article. The fourth and fifth types are cosmetic tattoos (most commonly eyeliner or lipstick) and medical tattoos used to aid in radiotherapy.

I would argue that there are at least ten different types of tattoo, and all of them could be seen on display at this year’s Soundwave festival. Most people are familiar with the lower back Tramp Stamp, or it’s male equivalent the Champ Stamp — but these styles are so commonplace that they don’t bear mentioning in a scientific analysis such as this.

Without further ado, here is a handy guide to help you identify the ten most common types of tattoo you might spot at a heavy metal festival in 2013.

Have you ever had a group of words that mean so much to you that you want them on your body for the rest of your life? Follow up question; if you did indeed have such a group of words, would you then tattoo them somewhere that you couldn’t actually read them without the aid of a mirror?

If the answer is yes to both of these questions, you’re ready to get an Oh-so-meaningful phrase tattooed somewhere that you’ll forget until you’re sitting in a job interview.

Carpe Diem means ‘Seize the Day’, which is a lovely message for the person standing in line behind you at the Post Office. 'So this is continuous happiness' is a lyric from an Alexisonfire track (which could equally make it a Type 3 tattoo), and 'Love with no regret, Hope for every moment, Dream with all your Heart' seems like something your grandmother might say to you on her deathbed.

To be honest, I have no idea what the last one is all about. When you put it into Google translate you get something along the lines of ‘so stubborn no matter how far away you cannot sex more’ which probably makes more sense in Spanish.

Anecdotal evidence would suggest that people who get inked with Oh-so-meaningful phrases tend to be female and not have a lot of other tattoos.

Formerly a subset of Type 1, Back Words are now so prevalent that they demand their own category. Back Words tend to be etched across the shoulder blades of young men and are usually accompanied by two or more other poorly thought out tatts.

Back Words are often favoured by surfers and people who are concerned that they might be dismembered and need to be identified by their torso only.

Some people opt for the classic single meaningful word approach (Eternal) or their place of origin/girlfriends name (Santinao – possibly a misspelling of Santiago?). Others prefer a back-mounted extension of the Oh-so-meaningful phrase like Anything lost can be found again except for time wasted (deep, man)or my personal favourite When it’s a Beautiful Day Its a Blue and White Sky (seriously, what?).

Kudos will go to the first reader who can identify what the guy on the far right is trying to say. I think it might be 'Nosebreath...'

The best argument I’ve ever seen against getting tattooed with your favourite band logo is the bank manager I once met who had 'Simple Minds' on his wrist. Not the sort-of-cool logo, the actual words 'Simple Minds'. It was, at the same time, amusing and somewhat sad.

And what about all those people who got a Michael Jackson tattoo? How do you explain that one to the grandkids? Well, he was a pederast, but he could dance really well...

Still, young people seldom learn from the mistakes of their elders, so naturally there were a lot of people sporting Band inspired tattoos at Soundwave. Metallica logos were popular, and varied in quality from the competent to the absolutely horrible (examples of each above). Blink 182 were also represented in logo-on-calf form, and a band who may or may not be the Ramones added a bit of personality to the whole affair.

Best in show was no doubt this music inspired sleeve 'n chest piece, which subtly incorporates the Led Zeppelin symbols on the bicep. It probably helps that the guy doesn’t have man-boobs as well.

I use the term Prison Style because some people actually ask professional tattooists to do this type of work. I’ve been told that some people like to go to prison looking like they’ve already been there, so they’ll pay $200 an hour for someone to ink a wristwatch without hands or an elbow spiderweb for instant slammer credibility. While I seriously doubt that this works, it does allow me to say that it’s possible that none of the men featured in this category have ever served time.

Prison Style ink is more likely to appear on body parts such as necks and hands, and frequently features letters across the knuckles (such as love and hate). In addition to the aforementioned watch and web motifs, common images include crucifixes, skulls, eagles and poorly drawn pictures of Jesus and Mary.

Both inside and outside of the walls, Prison Style tatts are designed to intimidate. I think you’ll agree that most of the above do that job admirably.

The antithesis of Prison Style, some tattoos can truly be classified as Fine Art.

Each one of these pieces here took hours in design, body placement, line work and shading. They are the result of a creative partnership between artist and canvas that results in a tattoo with depth, personality and style.

From the modern art approach on the left, through the Spanish influenced faces and the beautiful full back tiger, to the delicate roses and noble hound, these Fine Art tattoos are comparable to anything hanging on the walls of an inner city gallery.

Some people love God, and some people prefer the other guy. As you would expect, the latter group are slightly over-represented at metal festivals like Soundwave, and they’re very fond of tattoos.

Many I ♥ Satan tattoos owe a debt to tribal designs, tweaked to include devil horns and flames where possible. Half sleeves are complemented by full back wings and ‘carved into flesh’ effect shading. Now and again, they just bite the bullet and get a picture of the Devil offering you his hand.

The two dudes on the left are a good example of a styles clash, as I ♥ Satan meets Prison Style with a hint of Tribal thrown in for luck.

Kissing cousin to the Bogan Cross is the Unfinished Symphony, the type of tattoo that has never been quite completed, and looks rubbish as a result. Common examples include outlines of Tribal symbols, uncoloured Coy fish and partially shaded dragons. From a distance (or even up close) it can be difficult to work out what these tatts are supposed to be, but that doesn’t matter because tatts are badass whether they’re finished or not, right?

Here’s a new rule for anyone considering getting inked. Unless you’re actually a member of a tribe, you’re not allowed to get a Tribal tattoo. And I don’t mean some kind of half-ass, post-modern ‘urban’ tribe — I mean a proper tribe with spears and loincloths.

At this very moment, there are literally thousands of young and middle-aged people walking around with a bunch of overlapping black lines on their shoulder or back that have no historical, religious or cultural relevance to them or anyone they’ve ever met.

Some have a bit of Celtic influence thrown in for good luck, others start out small and just keep growing until they fill an entire body part. A precious few reflect anything original or different like the one on the far right above — but that guy looked like he might have once been part of a real tribe.


Type 9: It Means Something to Me, Man

Of course, almost all tattoos have some meaning, or they’re just random doodles that last forever.   Some people, however, go out of their way to get ink that both looks cool and has some deeper meaning.

The guy on the left here really likes HR Geiger, and would secretly like to be impregnated by the Alien queen. The dude with the Hope champ stamp clearly thinks the sun shines out of his arse, while the duo below him are a big fans of Pokemon and da Vinci’s Vitruvian Man (but not necessarily of good tattoos).

Our man next in line teams a surfing inspired Champ Stamp with some nice Back Words, and the lady on the far right has a Phantom comic tattooed on her arm. Now that’s metal.

Did I mention random doodles a minute ago?

Here we have, from left to right, a random collection of hipster symbols including a peace sign and young Homer Simpson; a tree because — why not; a nice set of head flowers; a creepy neck demon; and something I’m not even sure how to describe. Misplaced self-confidence?

Some people get tattoos just to mess with, or annoy, other people — like this dickhead (warning – tattoos in link are disturbing and NSFW); and some people are just slightly odd — a quirk that is often reflected in their choice of ink.

On the other hand, if the measure of a tattoo is that it’s interesting to look at, then these WTFs are clear winners, and at least they’re more interesting than another bloody tribal...

[Full disclosure:  I have tattoos that fall into the following categories: Type 1, Type 6, Type 8, Type 9 and possibly Type 10.]