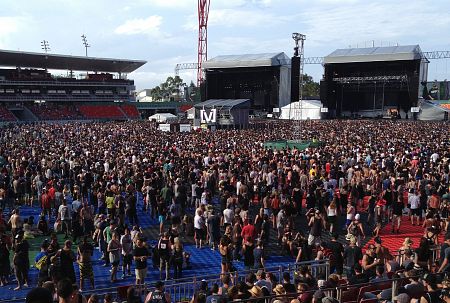 Music festivals have a long a storied history.

From the loved up days of the Sixties, when hippies got nude and rocked out to Jimi Hendrix at Woodstock, through the corporate sponsored violence of Woodstock ‘99, to today’s mega festivals like Cochella and Rock Am Ring, festivals have always been a great chance to hear music you’ve never heard before.

After kicking off in Perth, Soundwave has been travelling around Australia since 2007, bringing the best hard rock and heavy metal acts from around the world. Former headliners include Nine Inch Nails, Faith No More, Iron Maiden, Slipknot and The Offspring.

This year boasted the biggest line-up to date, headlined by Metallica, Linkin Park, The Offspring and most of Blink 182. The Sydney leg was held at Olympic Park on a hot and steamy Sunday in February. This is one version of the events of that day.

Getting into the venue was the first challenge of the day. There were around thirty police officers surrounding the festival entrance, with half a dozen sniffer dogs spread out between them. It was a little like watching a game of Frogger as hundreds of stash-carrying metalheads tried to time their casual walk to avoid the constantly roaming dogs.

As a side note, according to official reports a total of 52 people were ‘identified with illicit drugs’ which amounts to around 0.07% of the 75,000 people who attended.  By my reckoning, at least 10% of any music festival patrons consume illicit substances while at the event, and this figure seems likely to increase when you have bands like Cypress Hill on the bill. The fact that an extensive (some might say excessive) police presence only caught 52 people seems a little slack, to say the least.

The first band of the day (for me, anyway) was called Confession. Confession are a growly sort of bunch, but very polite, thanking the crowd after every song. They also had a banner above the stage that said ‘Fuck Cancer’, a sentiment with which I agree. Confession played one of the smaller stages in the blazing sun to a crowd that was pacing themselves for a long day – but they went hard all the same.  Nice job, Confession.

Next up was the last few minutes of Kyuss Lives!, the band formerly known as Kyuss when Josh Homme was still in it. Homme went on to form Queens of the Stone Age, the other guys joined other bands, got nude on stage, smoked a lot of weed and then got back together for some quick cash based on name recognition. Due to legal intervention by Homme they can’t actually record under the name Kyuss Lives!, so they call themselves Vista Chino. While it’s probably unfair to judge a band on one and a half songs, that’s what festivals are all about, and so I thought Kyuss Lives! were a bit crap.

Third on my personal bill was Stone Sour.

Fronted by Slipknot screamer Corey Taylor, Stone Sour came on stage and energised the audience for the first time that day. Looking like a metal version of Prince Harry crossed with Richie Cunningham, Taylor stalked the stage and tore into Stone Sour’s heavy rock catalogue like a man possessed. Hits like Gone Sovereign and Come What(ever) May got the crowd jumping, and more than one hardcore Slipknot fan (you can tell by the t-shirts) was heard to remark that Stone Sour were a lot more metal than they had thought.

Heavy metal legends Slayer were up next, and they raised the bar for heaviest band of the day.  The crowd was noticeably older, which makes sense when you consider that Slayer have been together since 1981.  Most of the band members are looking pretty old and tired these days - except the dude with the tattoos on his head, he still looks fucking scary.

To be honest I’ve never really got into Slayer, and seeing them live didn’t change anything. They’re still a great thrash metal band, I just don’t really like thrash metal.

Following a quick snack I headed out to the smaller stages, which involves a fair hike at a venue the size of Olympic park.  It’s good in terms of sound separation, but I did hear many young punters complaining about the distance between stages.

I stopped to take in All Time Low, but was nonplussed by their juvenile stage banter and obsession with boobies, so kept on moving. They did play the ‘Sydney is the best city we’ve ever been to’ card, which was to become something of a theme throughout the day.

I could smell the pot smoke in the air as I approached the Showground, home to Stages 2a and 2b.  As I entered the arena Cypress Hill were playing, a heavy cloud hung over the crowd, paying testament to the sniffer-dog dodging skills of the average metalhead.

B-Real gave a shout out to the crowd for supporting a hip-hop band at a metal festival, and then launched into a very metal version of the classic How I Could Just Kill a Man. The crowd favourites kept rolling with Insane in the Membrane and Hits from the Bong — which was rewarded by a fresh cloud of pot smoke. All in all, a very entertaining set in front of an appreciative (and very mellow) crowd.

Playing to around a hundred people on a side stage were Living with Lions, who had just got a new smoke machine and were eager to try it out.  This resulted in the stage being enveloped in a thick cloud of smoke for most of the set, with various tattooed players emerging occasionally from the fog to sing or jump around.

After the smoke cleared Cancer Bats took the stage, and proved why it’s worth getting away from the main stages at festivals. They were tight, passionate and bloody loud, and the gradually growing crowd were treated to an awesome set from a band on the rise.

The look of a metal band is often important to its success (see Kiss, Slipknot) and Cancer Bats are fortunate to have a classic metal combo. The bass player rocks a massive beard and is covered in ink, the guitarist is fat and doesn’t move much, and the singer leaps about the stage like a madman happy to be plagued by demons. 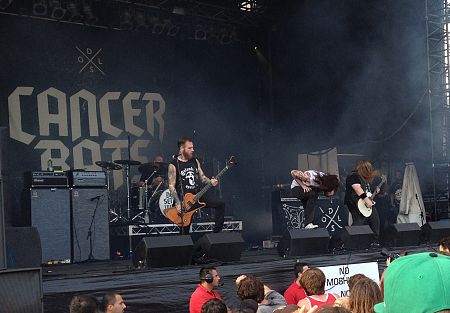 Back to the main stage for Linkin Park and Metallica, the dual headliners of my Soundwave experience.  I have seen both bands before and found them pretty bloody good, so my expectations were high.

In serious metal circles, it has always been sort of cool to hate Linkin Park. They were tagged with the pejorative Nu-Metal and accused of picking their name so they could be on the CD racks next to Limp Bizkit. It would seem that all of the serious metalheads have gone somewhere else, because the band take the stage to rapturous applause.

Ten minutes later, the fucked up guy was stretchered off giving the thumbs up; Chester had shown once again that he is a caring and sharing sort of chap, then they launched back into the metal. The closest they got to a ballad was Somewhere I Belong, which still rocked pretty hard.

Rapper Mike Shinoda told the crowd that Australia was one of his favourite places, but didn’t specify how long that particular list was. After almost an hour, Linkin Park’s allocated set was almost over, but when they launched into Numb the crowd moved together and there were forty odd thousand people all jumping up and down and generally rocking out. It was a classic festival moment.

Metallica were the closing act on Stage 1, and the crowd was hyped up to see them.

Up until this point, changeovers between bands had been efficient, with the next act generally starting within five minutes of the last.  Metallica bucked this trend and kept the crowd waiting for around half an hour. At the ten minute mark, a slow clap started up, followed shortly after by a ‘bullshit’ chant. A few minutes later, the Mexican wave started, running around the arena at least a dozen times before petering out.

When Metallica finally took the stage to the classic Hit the Lights, all was forgiven. They barely paused for breath before launching into the massive Master of Puppets, which got the entire crowd singing along at the top of their lungs.

It’s obvious that Metallica have spent years playing huge festivals around the world, because they know how to work an arena. Singer James Hetfield has always loved audience interaction, and during this set he spoke directly to everyone from the moshpit to the cheap seats (metaphorically speaking of course — there were no cheap seats at Soundwave).

Rather than taking the traditional festival route of the Greatest Hits set, Metallica delved into their back catalogue and played stuff for the true fans in attendance (Fade to Black, Harvester of Sorrow) mixed in with a selection of their many hits (Enter Sandman, For Whom the Bell Tolls). The only suspect choice that the band made was an excess of solos.

In a generous two hour set we were subjected (or treated, depending on your perspective) to three separate guitar solos, two bass solos and one drum solo, along with a ten minute ‘freak out’ style jam. It was at this point that a pair of grizzled metalheads pushed past, muttering how they couldn’t believe that they had missed The Offspring for this shit.

After just over an hour, the band left the stage to prepare for the inevitable encore, which was almost as long as the original set. There were fireworks for One, jets of fire for Fight Fire with Fire, and some dickhead lit a flare in the crowd. Classics like Battery traded space with fan favourites like Creeping Death, and by the time the end rolled around everyone was exhausted but happy.

It’s interesting to note that James Hetfield also played the ‘I love Australia’ card (at least three times, in fact), but from him it actually sounded genuine. Now that’s talent.