Let me say this up front: I am a Queen fan, not a “Queen + Adam Lambert” fan, hence this review comes from way up in the cheap seats…

I have been a Queen fan since around 1984, thanks to a ten year process of osmosis from listening across the hallways of the houses I grew up in. I would do my homework and fall asleep to the sounds of vinyl records like A Night At The Opera, News of the World, The Game and The Works, to name but a few.

My initial thoughts on hearing this tour announcement were:

“Nope, not going, this is not Queen — this is half of Queen plus some guy I’ve barely heard of.”

After all, it wouldn’t be The Beatles without John Lennon or Nirvana without Kurt Cobain, so how could it be Queen without Freddie Mercury?

But following a long period of reflection, I came to the conclusion that I could not miss what was most likely the last chance to see my favourite axeman Brian May and the perennially sunglassed drummer Roger Taylor perform on stage. While my older brothers had the opportunity to see Queen on one of their previous tours, I was too young to witness Mercury strut his sensational stuff live on stage, so this was going to be the best I could ever hope for as far as seeing “Queen” was concerned.

May and Taylor’s tour front man was to be Adam Lambert — who is not to be confused with Christopher Lambert, the French actor who played a Scotsman in the movie Highlander alongside a Scotsman who played a Spaniard (with an awesome soundtrack by Queen making this sidenote totally relevant).

Lambert is a runner-up from the 8th and I’m sure best season of American Idol in 2009. It’s probably confirmation bias, but it’s the runners-up on these talent quests that always seem to do better than the winners. Making up the support band was Taylor’s offspring Rufus Tiger Taylor on percussion, Neil Fairclough on bass and Queen’s long-time fifth member Spike Edney on keyboards.

With the “Paul Rodgers debacle” fresh in my memory, I settled in to my seat, arms folded, to see if this Lambert dude could in any way do justice to the legend that was one Farrokh Bulsara.  Now I’m Here and Stone Cold Crazy were a promising start, two of the band’s heavier tracks from the Sheer Heart Attack album, followed swiftly by Another One Bites the Dust, the massive hit penned by the sensibly retired bassist John Deacon.

(Sidebar: maybe I missed it up in the bleachers, but I was a little disappointed not to hear even a passing shout out to this talented but understated musician who wrote some of the band’s highest selling singles).

However it was only when May began to punch out the familiar guitar intro to Fat Bottomed Girls that I found my arms beginning to unfold and my head start to nod along to the rhythm of one of my favourite tracks from the (thankfully) misleadingly named Jazz album.

Lambert has his own flamboyant style, which came to the fore in an amusingly camp rendition of Killer Queen, delivered while reclining on an opulent red sofa! Lambert’s impressive tenor voice and range seemed better suited to the power ballads Who Wants to Live Forever and In the Lap of the Gods than the heavier tracks such as Tie Your Mother Down and I Want it All, but to his credit he never tried to be a Freddie impersonator. And in appearance, Lambert he was more George Michael than Mercury.

Following his vocally outstanding version of Somebody to Love, which won over most of the remaining cynics in the Allphones crowd, the show toned down with an acoustic interlude on a smaller stage on the end of a neon-lit runway jutting out into the mosh-free “mosh-pit”.  May, now solo, touchingly introduced the first Mercury tribute Love of My Life followed by his own astronomically-themed ditty ’39.

The concert then began building to a rock crescendo, with Taylor surprising many by brilliantly belting out A Kind of Magic (from the aforementioned Highlander) followed by a customary May guitar solo, which featured more riffs from his 1992 solo instrumental track Last Horizon than the usual Brighton Rock intro. Slightly unnecessary bass and vocal solos, the left-field song choice Dragon Attack, and a short but indulgent drum battle between Taylor and his son tended at times to stall the momentum that had been developing with crowd favourites Under Pressure, Radio Ga Ga and Deacon’s I Want To Break Free.

The evening reached its inevitable thumping encore of We Will Rock You into We Are the Champions but not before the fun of Crazy Little thing Called Love and of course Mercury’s magnum opus Bohemian Rhapsody, with Freddie’s voice smoothly interwoven into its performance at key moments to rapturous crowd approval.

So, was this Queen?

No. No it was not. Try as I might, I just couldn’t muster the same kind of excitement I would have if John and, particularly, Freddie were on stage. Despite understanding the obvious reasons why they do it, I still wish they wouldn’t call it Queen — even with a plus sign inserted before Lambert’s name.

Was it a highly entertaining concert that I’m glad I attended?

Yes it was. May’s guitar playing was incredibly precise for a man less than 3 years shy of his 70th birthday and Taylor, although looking slightly uncomfortable when called on to strut around front of stage than he does in his familiar territory behind the kit, still appears to have all his dexterity and, vocally, he probably outperformed May but not Lambert.

Did I buy any of the over-priced “Queen + Adam Lambert” themed merchandise on offer after the concert?

Please, give me some credit! 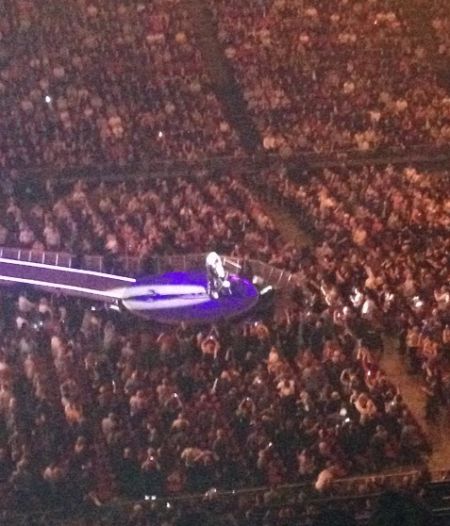