SUBSCRIBE   DONATE LOGIN SHOP
SUBSCRIBE   DONATE
How we prevented a Morrison dictatorship
How Howard screwed the Libs
U.S. site tries to ruin what makes fairy bread great
Bloody Idiot of the Week — Episode 28: Get used to it
Morrison's 'politics of retribution'
Literature

'Bob Ellis: In His Own Words' launch and review

The best of Bob Ellis book 'In His Own Words' is a modern classic — and so was Bill Shorten's speech at its launch, writes Sydney bureau chief Ross Jones.

But the launch of Bob Ellis’ last book, In His Own Words, was anything but dull. A vibrant night with sparkling speeches delivered against the backdrop of a perfect Sydney sunset. And the booze was good too.

Bob’s publisher, Black Inc, knows how to do it.

In His Own Words is, as the cover says:

‘... the memoir that Ellis had been writing all along.'

Most IA readers are familiar with Bob’s style and my words cannot do him justice, so I am not going to try. Suffice it to say, Bob’s book is an Ellis-sized romp through Australian life, from the tough and rural 1940s, through the swinging Sixties, the traitorous 1970s and so on, right up to the slightly more depressing 2010s.

In His Own Words is a collection of Bob’s writings, drawn from diaries, speeches, blogs, scripts and articles, together with previously unpublished pieces and eight pages of photos of Bob, from cheeky toddler to cool dude to political contender to rumpled curmudgeon.

The book is contemporary Australian history writ large by one of Australia’s best — an immediate classic.

Bob’s wisdom, his unique take on events, shines through the 374 pages. Mournful, resigned humour interspersed with quiet rage make the pages turn themselves.

For me, though, the highlight is a pool game played against his mate, Les Murray AO, poet and Living Treasure:

A pause. Balls clash on the table.

ELLIS: And pool is the great demonstration of the infinitude of human possibility. There is no pool game that resembles any other pool game. And yet there are only fifteen variables. And a few feet. Imagine predicting life itself.

MURRAY: (laughs) … Is that not the eight ball?

Now, that is philosophy. 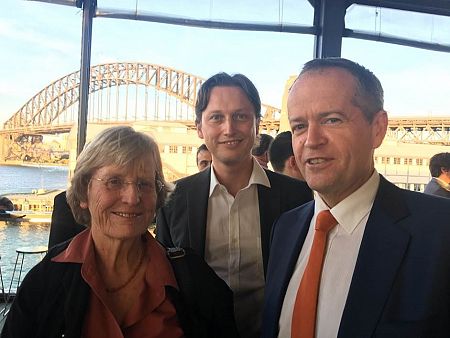 Mum – novelist and screenwriter Anne Brooksbank – did the hard work of compiling In His Own Words, a daunting task given Bob’s prodigious output over the years.The crowd on the night, about 50 of us, had a lot of fun at the buffet (cheeses, grapes, quince jelly, several kinds of bikkies) and enjoyed the circulating snacks before Bob’s son Jack took the mike. Jack delivered a warm and entertaining speech, which demonstrated he had picked up the well-crafted word gene from Mum and Dad.

That the result works so well is testament to her skill.

Among the crowd was Labor leader Bill Shorten, who bought along his own drink in a paper cup with a straw. Didn’t go for the cheese either. Bill and his minder milled with the crowd for a while before it was his turn on the mike.

And what a turn it was. I don’t know who wrote his speech, but Bill delivered it as though it was his.

I had never heard Shorten be funny before. Not zingers — genuine humour, reminiscing about his old mate Bob.

A brilliant speech which bought the house down. And that’s why this story was not written until weeks after the 6 October event.

I was so impressed by Bill’s speech I thought it would be great if IA published it in full.

Bill’s minder thought this was a good idea too, so I gave him my card and he agreed to email a copy.

I waited a bit then emailed Bill’s office. Still no response.

Its Time to tell people to buy the book.

According to Wikipedia, the Page 99 Test:

'... is a method of evalutating a work of fiction suggested by literary critic Ford Madox Ford.[1][2][3][4] Ford suggested that prospective readers open a book and read page 99 to gain a sense of how well written the work is while avoiding any back-cover synopsis or the first few pages, as these are typically given extra attention during editing and may not reflect the quality of the book as a whole.'

For any reader unfamiliar with Bob’s wordsmithery, below is page 99 of In His Own Words.

It is non-fiction, but I am sure the theory holds.

‘Well, it’s where people unthrilled by the money economy come,’ he said. ‘Here you can be broke in passable comfort, in a beautiful, clean, inspiring, special – still special – place.’

I stood among the snowdrifts on Mount Wellington on December 27th looking out over bunched clouds and sun shafts and cliffs and shores and rainstorms and patches of blissful, green- meadowed summer as if I were seeing, somehow, the whole world all at once, and I pondered, as further snow began to fall, the upside- downness of Tasmania.

How though 39 per cent of it was national park or protected zones, the largest such entities so classified in the known world, the war of the trees, more trees, more trees, went on. How, though 72 per cent of its people disliked wood- chipping, wood- chipping went on. How its woodchips mostly went to Japan, but Japan preserved all its own trees and used the trees of the rest of the world for its famous, delicate paper and dividable virgin chopsticks. How the bitter history of Labor and the Greens in Tasmania, and the coalition between them that Bob Brown ended by bringing down the Field government after a breach of trust – or what he said was a breach of trust – and the historic links between Labor and the timber- workers’ unions – John Curtin was for years the chief representative of the Victorian branch – meant that thankless, carping rancour unceasingly en- venomed the discussions of two humanistic parties, Labor and the Greens, here in Tasmania as nowhere else. How a pledge of a hundred dollars each from each Green voter in the Commonwealth might buy the Styx Valley, but what was preferred instead was the politics of whinge, and crusading kerbside slogans, and poignant song. 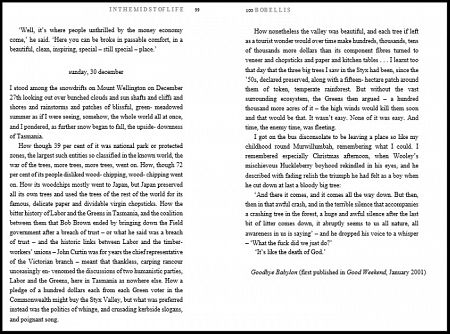 'Bob Ellis: In His Own Words', released 3 October 2016, was compiled by Anne Brooksbank, and features an introduction by Jack Ellis and a reflection by Les Murray. It is published by Black Ink and is $34.99 paperback (free delivery anywhere in Australia) or $14.99 as an e-book. Click HERE to order.

Ross Jones is the author of 'Ashbygate: The Plot to Destroy Australia's Speaker'. You can follow Ross Jones on Twitter @RPZJones.