SUBSCRIBE   DONATE LOGIN SHOP
SUBSCRIBE   DONATE
Wanted for Robodebt crimes: Morrison, Tudge, Robert and Co
The Commonwealth Bank's illusion of ethics
Limiting anti-corruption public hearings an exceptionally bad idea
Get a Mark David T-shirt!
An elegy to masks and why mine stays on
Film and drama

Before Kardashian Inc there was Zsa Zsa and the Gabor Sisters

On the passing of the legendary Zsa Zsa Gabor, contributing editor, Tess Lawrence, reminisces about her life and the time they spent together in Sydney.

ZSA ZSA GABOR and her sisters did not initiate the cult of celebrity but, dahlinks, in their making hay day, they made home-brand Kardashian Inc look like desperate and pedestrian wannabees.

The glamorous Gabor Girls, as they were known, not only included Magda and Eva, but also their mother Jolie — an author, astute business woman, jewellery designer and entrepeneurial wit in her own right, who had fierce ambitions for herself and her daughters, in much the same way as momanager Kris Kardashian has for hers.

And, as is sometimes the case, the success of the Gabors can be seen as partially overcoming awful tragedy.

Jolie's family felt the personal string of nazism, she lost family members and her own brother in one of the notorious camps.

Like many Hungarian Jews and migrants from throughout the world, she and her husband sought refuge in the United States, taking their trio of beautiful daughters with them, including Zsa Zsa, crowned Miss Hungary 1936, although she was never formerly crowned. She was underage.

Jolie, who appeared on the top rating show What's my Line? in her own right, was a staunch believer in the empowerment of women — a characteristic she gifted her enthusiastic daughters.  They used all they had to make their way in the world, including their beauty, great charm and most of all a self-deprecating sense of humour. And a sense of fun.

It should surprise no-one that the news of Zsa Zsa's death this week continues to intermittently interrupt the blood-drenched headlines of war zones, no less Syria's Aleppo, the seemingly never ending shameless Armageddon of our own making.

No serious critique and analyses of media should exclude the extraordinary impact of notoriety and celebrity that fuelled the public personae of the Gabors, and Zsa Zsa in particular.

Like their genus, they were ultimately famous for being famous and their talent for self-promotion remains testimony to their comic genuis and media savvy manoeuvres, turning setbacks and even police charges into a media frenzy with a wink and a wiggle of their sassy butts. They made innuendo an artform and a mechanism to outflank the censors.

Remember that, for them, there was no Shakespeare to draw from Plutarch's Lives and thus to give them eternal life in history. No Herodotus, no Tacitus, no fifteenth century historian, like Ibn Khaldun, whose "ilm al-unran" shows that, even back then, some of us busied ourselves with the science of culture; even earlier there's the twelfth century's amazing historian, Anna Komnene, a princess of the Byzantine Empire. 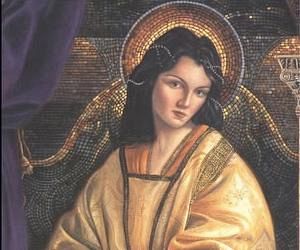 Without the benefit of Facebook, Twitter, Instagram or the hit-me-with-your-selfie stick, the Gabor women relied on their own relentless hardwork and pursuit of the limelight and the inevitable slimelight, the well-oiled Hollywood machine, movies, Broadway, television, newspapers, magazines, radio, gossip columnists, restaurants, fashion, glamour, peroxide, paparazzi, chutzpah, charm, beauty and their voluptuous hourglass figures. 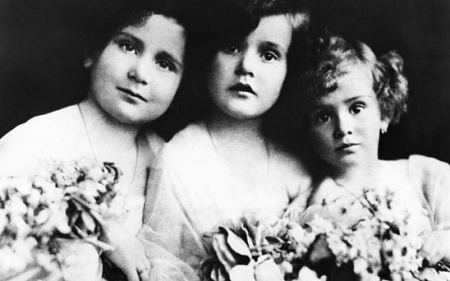 Even when they were very little, the Gabor sisters loved the camera and the camera loved them. (Source: reelrundown.com) 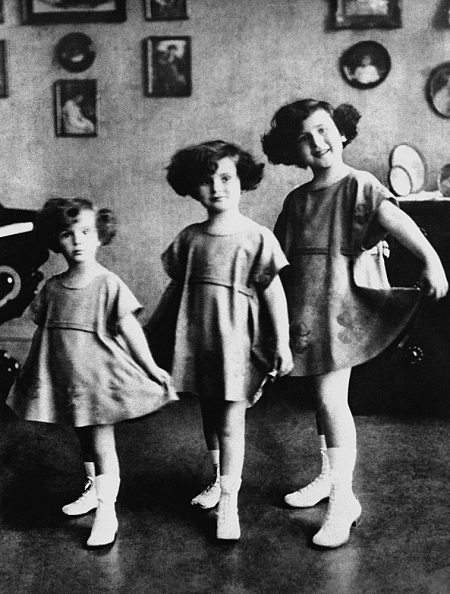 Three pretty maids are we, all the way from Hungary. (Source: Pinterest) 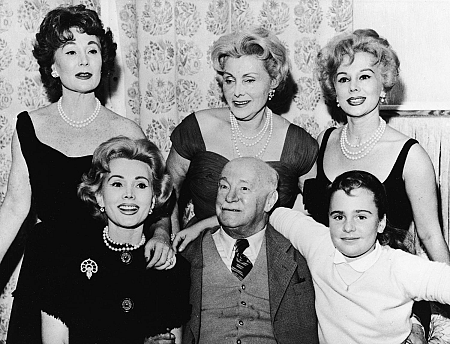 ZSA ZSA, THAT SLAP AND THE BEVERLEY HILLS COP!

In 1989, Zsa Zsa was driving happily alone in Beverley Hills in her Rolls Royce, a flask of Jack Daniels by her side, when she was pulled over by motorcycle police officer Paul Kramer. Not once. But twice.

Zsa Zsa slapped the officer. All the while a stream of invective and "vulgar" language spewed forth from her perfectly liplined lips.

The ensuing court case was reality television at its best.

Here's a slice from the LA Times:

"In Nazi Hungary they were fairer than here. Here they don't kill you. They kill you with words," she told reporters at one point.

At one point, a mock fight in the court building between a Zsa Zsa Gabor impersonator and a man in a "Hang Zsa Zsa" T-shirt provoked wild laughter from bystanders and stern criticism from Gabor's daughter, Francesca Hilton.

The judge in the case accused the former Miss Hungary of "milking" the criminal justice system to publicize herself.

"She has demonstrated an attitude of continual contempt for the legal system,” the judge said.

"Zsa Zsa Gabor tried to make a mockery out of the idea of equal justice. She has an unfortunate history of trying to turn everything into farce and to mock everything,” he said.

"It started out as a minor incident. But what elevated this beyond . . . a minor case was her conduct over that three-week period during the trial where she made a mockery out of everything. And it wasn't just a mockery of the criminal justice system . . . the judge, the police officers, the court personnel, the prosecutors, the entire system, which she dismissed as a Nazi-type system because anybody would presume to judge Zsa Zsa Gabor."

Gabor was ordered to serve three days in jail, to pay fines and retribution totaling $12,937, to perform 120 hours of community service and to undergo a psychiatric evaluation. (The jury acquitted Gabor on the charge of disobeying an officer.) 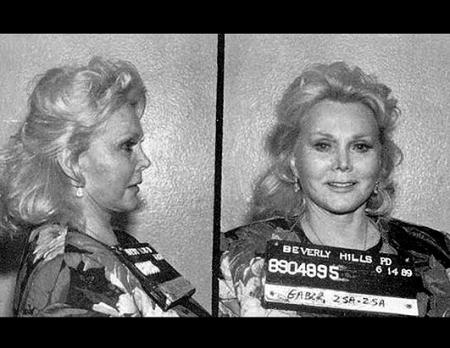 I was lucky enough to spend some time in Sydney with Zsa Zsa a fair while back.

I wrote at the time that

'If Cleopatra had possessed the charm of Zsa Zsa Gabor the asp would have turned on itself.'

Her good natured banter and bartering with the media included all the usual questions about her age and her husbands. The Gabor sisters had, I think, about 20 marriages between them, give or take a double bed or two; even sharing the same husband – not simultaneously – well, as far as I know.

Zsa Zsa was once married to actor George Sanders and later her sister Magda married him.

It's true that Zsa Zsa has been married so many times it's a wonder her wedding ring finger wasn't ringbarked.

Her first foray as a teenage bride was Turkish-born Burhan Belge, then press director of Turkey's foreign minister.

After the press conference, Zsa Zsa (Sari was her birth name) myself and a few others went to lunch in the Kings Cross area.

She was no dipso, no bimbo. She spoke five languages, not counting the languages of love, flirting and seduction. What's more, she made films in three different languages.

She tirelessly worked for charity, once at a fundraising concert for Bangladesh taking off one of her rings and auctioning it on the spot.

When musing about her own death, she told me:

"I don't think too much about my own death .... I don't think I am afraid of it. No, I'm not. I'm just like any other mother, afraid that something might happen to my daughter.”

Zsa Zsa was the only one of the Gabor girls to have a child, Francesa, a daughter she had with Hilton Hotels Founder Conrad Hilton. And yes, Paris is related and publicly acknowledged Zsa Zsa.

Francesca died in January last year, but it is understood that Zsa Zsa's husband, Frederic Prinz von Anhalt, who had an acrimonious relationship and legal dispute with Francesca, chose not to inform her mother, ostensibly because of her frail health.

I was the first person to get up on television and say exactly what I think ... it's more difficult to make people laugh than it is to make them cry.

If I can do that for just ten minutes out of their lives, then I am happy ... this is what my image is all about, a bit of fantasy.

The thus the floodlights have dimmed a little. And not just on Broadway or Hollywood. Take a bow Ms Gabor. 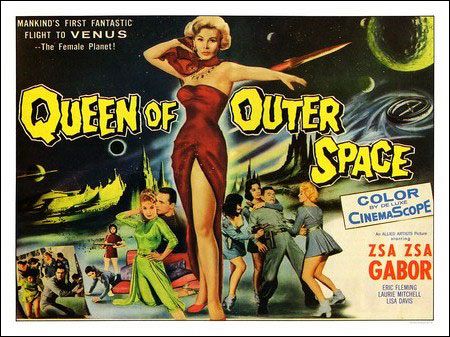 In honor of Zsa Zsa Gabor, drape yourself in diamonds and divorce your husband https://t.co/fbs2ZeebKP

Gets me every time ... Zsa Zsa Gabor — It's Simple Darling

Get a different perspective. Subscribe to IA for just $5.