Noel Wauchope, who has been covering the Nuclear Fuel Cycle Royal Commission for IA, calls SA Premier Jay Weatherill out over a sleight of hand following the Nuclear Citizen's Report this week.

SA Premier Jay Weatherill received the Nuclear Citizen's Jury Report on 10 July. He said that it was a "commonsense" report and that:

Here's where the sleight of hand comes in. That call to change legislation did not come from the Citizens' Jury. It came from the pro-nuclear Nuclear Fuel Cycle Royal Commission (NFCRC), and the jury was merely doing its appointed task — which was to paraphrase the NFCRC's recommendations. Throughout the jury process, the jury members were reminded that they had no brief to make any decisions or recommendations and they conscientiously stuck to that rule.

Now I think we know why Weatherill was so adamant that this group be called a "jury". A later group of 350 members, will also be called a "jury". There is some possibility that this number 350 could be taken as an adequate sample of the South Australian population of 1.712 million. So again, by regurgitating the NFCRC's recommendations, this might conceivably be portrayed as the “verdict” of the people. That's a lot safer than a referendum.

Much talk about "citizens' juries" ahead of SA's international nuclear waste dump but will they have any... https://t.co/ihVcq6NhMr

Weatherill and the nuclear lobby have worked hard for at least 18 months with the aim of making South Australia the world's first high-level nuclear waste importing business.

As you can imagine, there were and still are, many hurdles to overcome and it will take time to jump over them all. Obvious ones are the State and Federal legislation prohibiting, or making the importation difficult, the regulatory matters, the Aboriginal and Greens objections. Less obvious are all the negotiations to be done in secret with foreign countries and nuclear companies. And there's that last really unmentionable hurdle, that might happen — the probability of another nuclear catastrophe any time during the next 50 years. 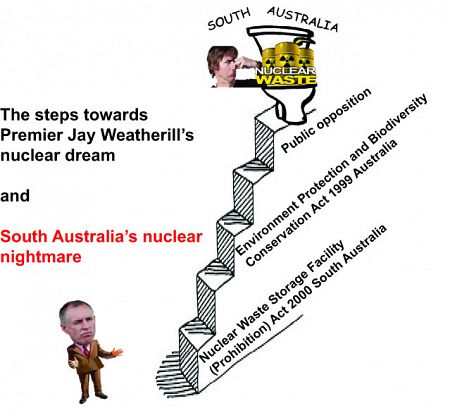 That NFCRC is over, and finished, but hey — not so!  The next move is a massive public advertising process and this kicked off with the recent Citizens' Jury, which, while being organised by the South Australian firm DemocracyCo, was master-minded and controlled by NFCRC personnel. The witnesses were predominantly pro-nuclear, speakers from NFCRC were prominent and NFCRC staff were present at many, if not all, sessions.

Several times, during hearings, and Q and A sessions, the jury was reminded of the necessity to change State and Federal legislation.

'The retrospective clause is basically saying that if anyone did anything illegal we now legalise it.'

(1) Despite any other Act or law to the contrary, no public money may be appropriated, expended or advanced to any person for the purpose of encouraging or financing any activity associated with the construction or operation of a nuclear waste storage facility in this State

This section was amended in May 2016. The government wanted to remove Section 13, altogether. However, after several efforts on this, (Greens' Mark Parnell objecting), Section 13 was amended, to include a new provision:

'(2) Subsection (1) does not prohibit the appropriation, expenditure or advancement to a person of public money for the purpose of encouraging or financing community consultation or debate on the desirability or otherwise of constructing or operating a nuclear waste storage facility in this State.'

That was a small step forward for the nuclear cause.

Now for a bigger step. The government needs to drastically amend the South Australia Nuclear Waste Storage Facility (Prohibition) Act 2000. Later on, they need to get changes made to the national legislation — The Environment Protection and Biodiversity Conservation Act 1999 (the EPBC Act).  They'd probably like these national powers to be removed and have these topics placed under State laws.

In building their argument for changing the law, the Weatherill Government needs to gather persuasive evidence about the proposed economic bonanza to come from importing foreign nuclear wastes. That means another round of expensive trips overseas, and a lot of advertising and promotional meetings in South Australia.

All this can now be justified, because, according to the government, the Citizens' Jury called for more information, especially on economics, and even more importantly, called for changing the law on importing nuclear waste.

The fact that this jury group diligently summarised the Royal Commission report, without themselves making any recommendations, will almost certainly get lost in the onslaught of pro-nuclear hype that is about to descend upon the South Australian population.

You can sign the change.org petition to Prime Minister Turnbull, 'No Nuclear Waste Dump in South Australia' here.

Read more about the history behind the Coalition's nuclear waste dump plan here. 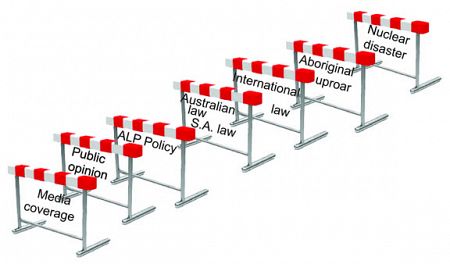 'group will lobby against a high-level nuclear waste dump being built in SA'
Erin Jones | The Advertiserhttps://t.co/fAPMhE01qO