Voluntary action for sustainable and resilient cities won't be enough

BUILDINGS NEED TO BECOME more environmental and resource sustainable, as well as more resilient to human-made and natural hazards. Rising energy prices, unhealthy levels of smog in cities, and increased exposure of buildings to floods and bushfires are but a few of the reasons for doing so.

This is why on 18 and 19 March, leaders of the building sector, policymakers and academics are coming together and discuss the way forward for buildings and cities in Australia and elsewhere at the Green Cities Conference in Melbourne.

Whilst governments tend to regulate city planning and the development and construction of buildings, they are held back in regulating increased urban sustainability and resilience, predominantly as a result of archaic planning.

Because cities in a country like Australia only transform by at best 2% per year, it may take up to 70 years until a rule introduced today applies to all buildings in the future.

There may be a possible solution to this problem: voluntary action by businesses and civil society. Such voluntary action is normally heralded on conferences like the Green Cities Conference as the panacea to the problem faced by governments.

But is it truly a panacea?

Over the last two years, I have studied over 50 examples of such voluntary action in Australia, Europe, Asia and the USA.

My insights are all but uplifting.

Whilst voluntary action has achieved a handful of successes, it has thus far not been able to achieve sweeping results in “greening” our cities.

An example of voluntary action in Australia: Green Star

In 2003, Green Star was launched by leaders in the Australian construction industry.

They wanted to show their buildings outperform others in terms of sustainability.

To give insight into the relative performance of a building, they developed a labelling scheme. For instance, a six-star rated building shows that it outperforms a four-star one. Green Star works similarly as the energy and fuel consumption labels you find on new fridges or cars.

That's over a ten year period.

I have seen this lack of meaningful success time and again in the over 50 examples of voluntary action I have studied. My work points towards four shortfalls in such voluntary action.

Shortfall 1: A lack of focus on existing buildings

This is a major problem.

At best, 2% of new buildings are added to the existing building stock each year. This means that roughly 98% of buildings are predominantly left outside the scope of voluntary action.

Shortfall 2: A lack of focus on residential buildings

Predominantly the top-end of the market for commercial buildings is addressed by voluntary action. Green Star is a typical example: it is predominantly applied for new office buildings in the central business districts of Australia’s major cities.

When these two shortfalls are combined, it becomes clear that voluntary action affects not even 1% of the problem: voluntary action appears only successful in the very top-end of the market for new commercial buildings.

Shortfall 3: A lack of focus on hazard resilience

Voluntary action has a dominant focus on the environmental sustainability of buildings, and hardly on their resilience to climate risks and man-made hazards. Again this marginal focus of voluntary programs is a problem.

It is estimated that more than 80% of all Australian houses do not comply with construction codes that have been introduced since 1980. Keeping in mind the devastating consequences of bushfires on Black Saturday in 2009 and those of the Queensland Floods in 2010 and 2011 one can only begin to grasp the need for improved resilience of the existing building stock.

Shortfall 4: A lack of focus on behavioural change

Voluntary action predominantly seeks an increased uptake and use of (innovative) technological solutions to improve buildings’ sustainability. Only a few of the examples I have studied try to do so through a change in the behaviour of how we use our buildings.

Again this is a problem.

Keeping in mind that most energy and water in buildings is wasted as a result of behaviour and not technology, a stronger focus on occupants’ behaviour is essential.

For instance, by fully switching off electrical appliances instead of switching them to stand-by mode, households can reduce up to 10% of their energy bill. For office buildings, these easy savings may be even more, given that up to 55% of energy in offices is consumed after office hours, on weekends and during holiday breaks, when hardly anyone is using these offices.

Why this limited focus of voluntary action?

In looking at the examples in my study that are successful, I can only conclude that it is about dollar value.

For developers, there is an almost guaranteed financial gain in developing new commercial buildings with high levels of sustainability, for they are found to sell at higher prices on the market and yield higher rents than conventional buildings. Their occupants may also market their buildings as being part of their social corporate responsibility policies, aiming to convince their clientele that they truly care about the environment.

Further, by participating in a voluntary action initiative, a business may sell more of its technology to its clients — say, energy efficient air-conditioners. It would make less sense for the same business to participate in an initiative that helps its clients to only change their behaviour.

There is no economic incentive in telling your clients that they can be more efficient in using their existing air-conditioners, now is there?

Finally, preparing for future hazards is, in the short term, less cost-effective than seeking reduced energy consumption — for instance, by installing solar panels. The latter is clearly visible on your reduced energy bill and will pay itself back. Guaranteed.  The former will only “pay itself back” if a hazard materialises somewhere in the distant future and if the building withstands it.

There is absolutely no guarantee either of the two will happen. 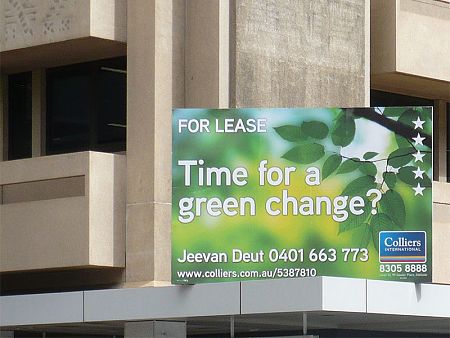 This truly asks for a rethinking of the potential of voluntary action for sustainable and resilient cities.

Policymakers, practitioners and academics alike have thus far ascribed much potential to these in terms of possible reductions of resource consumption in cities (that is, energy, water, building materials), possible reductions of greenhouse gasses and other wastes, as well as its potential to improve cities’ reliance to withstand future climate risks and human-made hazards.

There is nothing wrong with proudly introducing them to what has been achieved by some voluntary action initiatives, but the focus should be about what has not yet been achieved in terms of “green cities”. Though, this less-positive story is not likely to go down well with the up to $2,350 conference fees that visitors have to pay for attending the Green Cities Conference.

Voluntary action for sustainable and resilient cities won't be enough

19 March 2014, 8:00am Voluntary action in building design is unlikely to be able to achieve sweeping ...