Tony Abbott sends Australia off to fight the wrong war

While Tony Abbott sends Australia’s warplanes, bombs and soldiers into Iraq, the far more deadly war against climate change is being ignored by his Government.

AUSTRALIA’S WARPLANES ARE FLYING OVER IRAQ. Soon they will be dropping humanitarian bombs.

2013 has been Australia’s hottest year on record. An already dry sunburnt country, Australia is in the firing line of climate change.

Our Government of fools fails to join the dots.

The global peoples’ climate march coincided with Tony Abbott promoting himself as a saviour, in a war against a so-called “death cult” — ISIS.

But he is not the messiah, he is just a very bad prime minister. Tony Abbott is turning his back on our planet and promoting its massive destruction. Captain Ahab Abbott is intent on taking us all down with the ship.

In contrast to this, the worldwide September action for the climate was a pro-life movement. It called for a lifesaving switch to renewable energy.

But will protestations of any kind help us against the madness of idiots?

The headlines could have read.

Carbon dioxide (CO2) emissions are now at the highest level in human history. The threat level is beyond high — it is extreme.

The measures we take, or fail to take, can determine the fate of the world for millions of years. Delay is no longer an option, writes Tim Radford. Once the CO2 is released it is set to cause warming to rise, whatever we do in the future. The genie will be out of the bottle. The time to act is now.

In Melbourne, I marched with 30,000 people. This march felt as massive as the protests in 2003 against the invasion of Iraq. An estimated six to ten million took part in that march in over 600 cities and 60 nations.

Nevertheless the ‘coalition of the willing’ ignored the people and proceeded on their disastrous invasion path. It was a war based on lies that lead to half a million Iraqi deaths and fostered the conditions that created ISIS.

My first protest march was back in the days of Australia’s involvement in the Vietnam War. As an 18-year-old student I sat down with tens of thousands of people in Burke Street Melbourne, to demand a moratorium on the war. Western involvement in that war was also based on political lies.

The irony persists as Tony Abbott and the gormless ‘opposition’‒ arguably an oxymoron in this case ‒ recklessly head into Iraq for a third time. Abbott is more than eager to go with Obama in the fight against ISIS, but is boycotting Obama’s climate change action initiatives.

In a blatant snub, Abbott attended UN Security Council talks in New York, but shunned the UN Climate Summit held in New York the day before. He is just too busy tending and fostering his ‘home-grown’ terror campaign.

In any case, Abbott would have arrived sheepishly, empty handed, bereft and denuded of any plausible offering or climate strategy. Having now infamously repealed the price on carbon and attacked all measures already in place to reduce emissions. He has his eye on scrapping the RET and vandalising renewables.

Abbott is killing our action on climate change, while promenading on the world stage claiming ‘to lead by example’ and to ‘work for the benefit of mankind’.

A student who can’t come to class because he has not done the work, Abbott is playing truant. He has been dubbed a spoiler and destroyer of climate change action and of promoting a dirty Australia.

From somewhere in his deluded psyche, does Tony Abbott realize he is a climate dunce?

Abbott even sought to form an ‘alliance’ with another climate numbskull, Canadian Prime Minister Steven Harper. An alliance and unintelligently designed plan to thwart Obama’s action on climate change.

But the world and its people delivered its message to negligent governments.

We are out of patience. Act now!

Hundreds of thousands in over 2,000 locations protested.

The head of the United Nations, Ban Ki-moon, joined protestors in Manhattan, declaring:

“Climate change is the defining issue of our time and there is no time to lose.”

But will the largest climate march in history have any actual impact?

Andy Borowitz in the New Yorker has a satirical take on it.

He included a sample of idiotic comments.

Skepticism about scientists characterized many of the idiots’ remarks, including those of Tracy Klugian, of Albuquerque, New Mexico. “Those marchers are holding signs that say ‘Scientists this, scientists that,’ ” he said. “Well, how can scientists be sure that the Earth was colder thousands of years ago, when no one had invented a thermometer?”

“Look, if hundreds of thousands of people want to march about something, it’s a free country,” said Carol Foyler, an idiot from Kenosha, Wisconsin. “But let me ask them something: if the climate is really getting warmer, why was it so cold up here last winter?”

The Age reported the stunning turnout of 30,000 at the Melbourne climate march — but it only made it on page ten of the printed edition. Page one depicted a giant leaping football star, set to take a mark.

The Melbourne people’s march held up traffic — but not as much as the football final parade.

As we, the people, marched past an intersection, an enraged man leapt from his stalled car.

“What are you doing?”

He waved his arms:

“Will you all go back home and turn off your power? Idiots!”

This man was only half an idiot. Was this a cry of despair because the energy shift seemed impossible?

It is damn clear that Tony Abbott is on the side of ‘baddie’ polluters, while seeking votes and applause from idiots.

He is promoting fossil fuels with his every move. In his wars of distraction, he is defending coal and following the United States.

In a world with many idiots, is there hope for the planet?

Canadian author and activist Naomi Klein argues that there is — in this “new wave of activism”.

The divestment from fossil fuel movement, blockades, protests marches and art are some of the places where the people can make their voices count. They may not be heeded immediately, but they will be heard now and by history.

There is something each of us can do right now.

Taking non-violent action is the antidote to depression and despair. And it may save the earth. From indigenous rights, to the civil rights movement, to anti-apartheid, to women’s rights.

The climate movement is a struggle in which all our rights are at stake. We can win the day.

The challenge is to shift paradigms, understanding and ideas. These struggles are not won on killing fields. 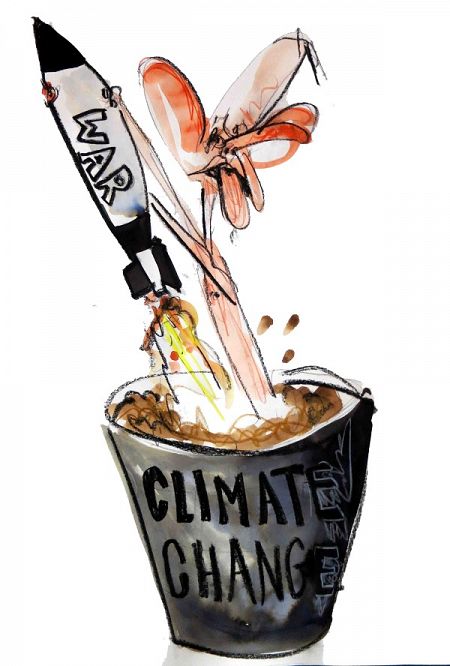