Abbott and his cronies aren’t just climate deniers and skeptics — they're headless chickens pushing us all towards the precipice. Lyn Bender lists 30 acts of environmental vandalism by the Abbott Government so far.

Speaking in London in late January of this hot Australian summer, Prince Charles pronounced climate change deniers to be the “headless chicken brigade”.

In other words, those in denial are running around in circles, agitated, separated from any form of useful cognition and already doomed. Their hapless subjects, we in today’s Australia, are also doomed to pointless activity that will get us nowhere fast.

But the Abbott Government does not merely have its collective head in the sand about climate change — it is, in the words of our future monarch, “headless”.

Abbott and his team of self-avowed deniers have tried to shoot the messenger, but the message is still being delivered loudly and clearly.

The Climate Council (originally the Climate Commission) was axed by the Abbott Government in one of its first acts. But it rose from the ashes and has just delivered its latest report on the state of the climate in Australia.

Here in Australia, we have just experienced a very angry summer. We should be mad as hell and screaming that we are not going to take it any more, but largely we are going quietly to our terrible fate.

The Victorian Labour Day public holiday in Melbourne on Monday this week was a very warm 32° Celsius on what seemed a typical Melbourne summer’s day — except for the fact that it is actually early Autumn. Moomba festivities were in full swing by the green lush banks of the almost blue, usually brown, Yarra River. It was the kind of day to lie under a tree and read a novel. What better choice than one that will aid the imagining of a future life, in the ‘Anthropocene’ age — the age we are now living out?

A by-product of the industrial age will be an irrevocably changed planet earth. This has been dubbed the Anthropocene recently and the outlook is very bleak and catastrophic. If we continue on blithely destroying our atmosphere, climate and habitat, we are facing the prospect of a fundamentally unliveable planet.

Long story writ short: we will be extraordinary ‘lucky’ to, yet we are highly unlikely to, cap global warming to two degrees, by the middle of this century. Two degrees will not be a good look in any case. The respected Potsdam Institute forecasts significant sea level rise that would severely impact coastal communities and cities.

So, given all this horrible news, I decided to relax and recline in my tiny urban roof garden and read a fable of the future.

In her future vision, life has become a nomadic search for food, shelter and for liveable land above the waters. The great cities are submerged and the knowledge of the enlightenment has largely been lost. Marshes and deserts abounded, while some rare lush ‘islands’ survive. But these too, are doomed eventually to sink beneath the encroaching waters.

The central characters ‒ General Dann, Griot, the snow dog and a child ‒ are caught between what they imagine of the past and the drive to survive. Life expectancy is now 40 or 50 years. Refugees overrun the world. In this environment, Lessing tries to imagine what would remain of love and attachment, kinship and loyalty.

In this world, with its endless wars, some attempt to understand and unravel the past. Perhaps the worst of it is that while many glimpse a world of past richness and abundance, no one seems to know how this world was squandered and lost through human folly.

As Lessing writes of us, the forebears, in her novel:

‘These were peoples who had no interest in the results of their actions. They killed out the animals. They poisoned the fish in the sea. They cut down forests, so that country after country, once forested, became desert or arid. They spoiled everything they touched. There was probably something wrong with their brains. There are many historians who believe that these ancients richly deserved the punishment of the (melted) Ice.’

But do the children of the third millennium deserve this punishment?

For this is what our headless chook brigade blindly strive to impose on our descendants. They have been working tirelessly to do this ‒ to destroy our environment ‒ since the day of their election.

It would be legitimate to say the environment is being ‘screwed’ by Abbotts and his henchman, the Environment Minister Greg Hunt. My thesaurus provides synonyms for ‘screwed’ as being — gipped, cheated, swindled, ripped off, bamboozled, conned, duped fooled and stiffed. In other words, the Abbott government has embarked upon, rape and pillage of the earth, where massive preservation and repair needs to be undertaken. 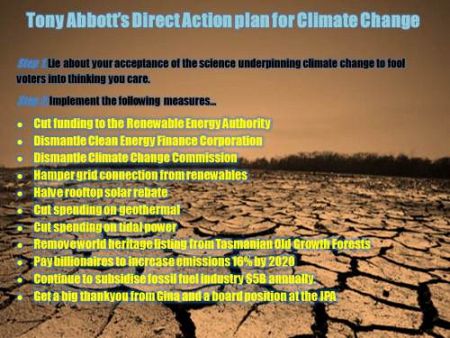 These are but a few of the known, or declared, environmentally destructive acts, of the last six months.

But the ultimate over-arching crimes of these headless chooks is their assault, denial and crusade against any meaningful action on climate change.

All of these measures are part of Abbott’s war upon mother earth.

The earth has been a mother to us all. She has provided and nurtured us with, an almost perfect environment, of arable lands, forests, air water, and ecosystems. These have evolved over millennia and we have adapted to this abundance. But now we are changing the atmosphere and these true fundamentals are being destroyed. Tracy Chapman’s song  Rape of the world speaks truly:

Mother of us all

Place of our birth

How can we stand aside

And watch the rape of the world

… the most heinous of crimes.

And Abbott is relishing his part. After all isn’t this ultimate misogyny: to attack our mother earth? 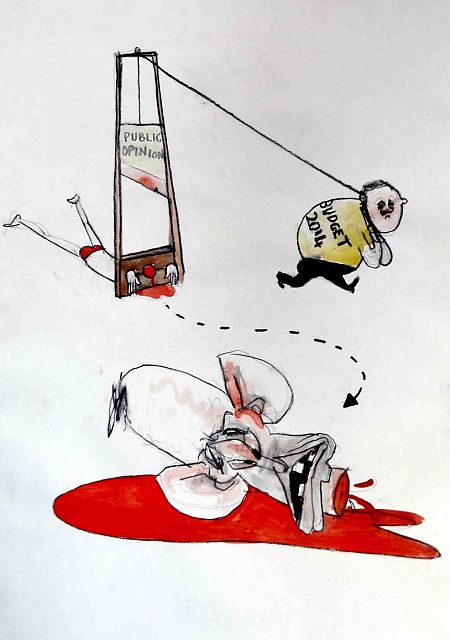