The Australian's Great Barrier Reef editorial: A misrepresention of science

A scientist, misquoted in The Australian, says the facts were misrepresented in the newspaper's Great Barrier Reef bleaching editorial. DeSmogBlog's Graham Readfearn reports.

ALMOST A QUARTER of corals on the iconic Great Barrier Reef have died because of record ocean temperatures driven by global warming.

Those are the bare facts, according to the Australian government’s Great Barrier Reef Marine Park Authority (GBRMPA).

The coral bleaching that swept across the reef system this Australia summer, hitting hardest the most pristine northern section, affected 93 per cent of individual reefs along its 2300 kilometre stretch (1430 miles).

Scientists have pointed out how those corals that survived the bleaching will be weakened and, to recover, they will need all the help they can get. That means big reductions in greenhouse gas emissions and local pollution.

The news has swept across the globe. Pretty much every major media outlet in the world has told its viewers and readers about the bleaching and shown them the spectacular and confronting images of bleached white coral. Now, the images show dead coral.

The impacts will be felt along the reef for years to come. The northern section in particular, according to Professor Terry Hughes, chairman of the National Coral Bleaching Taskforce, will never be the same in our lifetimes.

Global warming, driven mainly by the burning of fossil fuels, was the key culprit that drove ocean temperatures in the region to record levels which, in turn, caused the corals to bleach. The key question was, how many corals would survive?

But on Saturday 4 June, the Rupert Murdoch-owned TheAustralian newspaper, decided its page one story should not concentrate on the figures that confirmed the death of almost a quarter of the corals on the reef during its worst ever coral bleaching event. 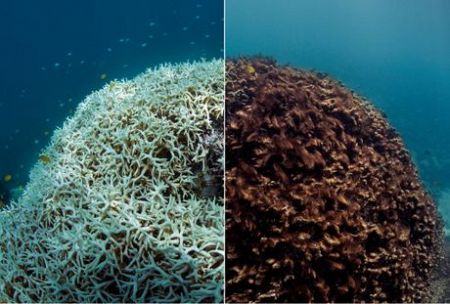 This image shows a dead coral  specimen on Lizard Island. On the left, the coral is already bleached white. On the right, the coral has later been covered with algae. Source:  XL Catlin Seaview Survey

Instead, The Australian focused on an accusation that some 'activist scientists' and 'lobby groups' had exaggerated the bleaching, quoting GBRMPA chairman, Dr Russell Reichelt.

The opportunity to have a crack at one of the newspaper’s favourite targets – environmentalists and climate change campaigners – was just too good an opportunity to miss, it seems.

But Reichelt later told Guardian Australia that, in fact, his criticism was more targeted at the media. He said:

I have no problem with environmental activists portraying the seriousness of the event.

These groups play a critically important role in raising public awareness and we communicate with them regularly. My concern is that the public receive clear understanding of the serious effects of this event on the Great Barrier Reef, including that it is caused by global warming. The media is reporting science in ways that are very misleading.

So this commentary on science in the media brings us neatly to The Australian's editorial from earlier this week, which picked up on its earlier story that the reef was in much better shape than some media and environmentalists would apparently have us believe.

'Nothing to see here,' says the @australian, about the environmental catastrophe on the #Great Barrier Reef https://t.co/1DmRGXEkE1

The editorial completely ignored Reichelt’s attempt to clarify the record, saying he had

' ... dissociated his agency from activist scientists and green lobbyists who have distorted surveys, maps and data in order to talk up the extent of coral bleaching.'

But then the newspaper went on to commit the same kind of misrepresentations of which it had accused others. The Australian gave another example of what it thinks is a tendency to exaggerate. The editorial said:

Ocean acidification is another case study in the pseudoscience of exaggeration. Interest in this topic has exploded, and journals have an inherent bias towards calamitous predictions, the Norwegian-based marine scientist Howard Browman told this newspaper in March.

“I never spoke to The Australian.”

The first thing to say about this, is that Dr Howard Browman has never spoken to The Australian. I know this because I asked him.

The Australian had actually reprinted a story that had appeared in the UK’s The Times newspaper, also owned by Rupert Murdoch’s NewsCorp, that had quoted Browman.

The second thing to know is that The Times story, which also ran on page one, was based on a misinterpretation of the conclusions from a special issue of the ICES Journal of Marine Science, which Browman edits.

As reported on DeSmog, Browman has said the interview he gave to The Times had been “cherry picked”.

Browman told me that attributing his name to the statement “journals have an inherent bias towards calamitous predictions” was “another distortion”.

He explained that across many science disciplines, there was a known publication bias against studies that did not find dramatic results. In March, Browman explained this did not mean that scientists were exaggerating results.

Browman told me that he would have expected The Australian to have known the issues with the original story.

“From this, I conclude that The Australian opinion editorial appears to be a case of compounded

The issues with the original Times story, featuring Browman, were also highlighted in a letter to the newspaper’s editor from members of the UK’s House of Lords, accusing the paper of “distorted coverage” of climate change.

Ocean acidification is caused by increased levels of carbon dioxide in the atmosphere, coming mainly from fossil fuel burning (Moore was recently hired by Europe’s peak coal industry lobby group to tell an audience of European policy makers that carbon dioxide was great for the planet).

Patrick Moore: the Polluters' Jukebox: Stick some money in him and he'll sing your tune. #coal #climate https://t.co/jNDkhP4zo0

But back to The Australian’s reef editorial, which also quoted Professor Carlos Duarte as saying that doomsday predictions over the reef risked conveying a “hopeless notion to managers and the public that we are confronted with an insurmountable environmental crisis”.

The quote is correct, but it does not relate to whether the GBR is bleaching, for which there is solid and robust evidence.

Addressing this requires a commitment from policy makers and managers to act locally to reduce local pressures (excessive nutrient and pollutant inputs from industrial and agricultural activities in the watershed and adjacent coast), thereby helping rebuild resilience, and globally to contribute to reduce green house emissions and help less favoured societies adapt.

The Australian also criticised U.S. President Barack Obama for a 2014 speech in which he said he was worried that his children might not be able to see the glory of the reef in the future.

Pres.Obama hopes Aust. Great Barrier Reef will survive so that his daughters can visit. We hope so too! pic.twitter.com/gfkOyP59hU

“It is not by doing nothing that these pressures will be removed and Obama Jr will be able to enjoy a healthy GBR.”

The editorial also tried to suggest that global warming was only a recent concern for the reef, saying that 'if climate change is the favourite reef villain today, it used to be the Crown of Thorns starfish'.

Attacks from the coral-eating starfish cause huge damage to the reef. One study from the government’s Australian Institute of Marine Science estimated the reef had lost half its coral cover between 1985 and 2012 and that the starfish was responsible for about 42 per cent of the loss. The starfish outbreaks have been linked to poor water quality on the reef due mainly to pollutants entering reef water catchments from farming.

But is climate change really the new “reef villain” as The Australian suggested? In 2009, GBRMP released its first 'Outlook Report' for the reef. This is what it said.

Unavoidably, future predictions of climate change dominate most aspects of the Great Barrier Reef’s outlook over the next few decades. The extent and persistence of the damage to the ecosystem will depend to a large degree on the amount of change in the world’s climate and on the resilience of the Great Barrier Reef ecosystem in the immediate future.

Almost 35% of the Great Barrier Reef is dead or dying – but Australia doesn't want you to know. 😓 https://t.co/qMwlBODY06

Subsequent Outlook Reports repeated the warning that the biggest long-term threat to the reef’s future is climate change. This is not some fad.

Without major cuts to greenhouse gases one group of scientists has suggested the extreme temperatures that faced the reef this summer will, by the 2030s, be only average conditions.

Just to be clear here, little is gained by exaggerating the impacts of global warming and pollution on the Great Barrier Reef.

But the issues created by exaggeration pale in comparison to the coral bleaching and now death that have changed a large section of the reef for decades to come, perhaps even generations.

Without major cuts to greenhouse gas emissions, the prognosis looks bleak for one of the world's most diverse natural habitats and a natural wonder of the world.

That is no exaggeration.

This story was originally published on DeSmogBlog.com under the title, 'The Australian Newspaper Misrepresents Science In Great Barrier Reef Bleaching Editorial, Says Scientist It Quoted', on 7 June 2016. You can follow Graham Readfearn on Twitter @Readfearn.

Bleaching along the Australian reef is the most extreme ever recorded. https://t.co/Ozo4cOlE2y pic.twitter.com/siDplSzWhx