Australia may one day get a rude shock when the tap controlling the flow of oil to these shores is abruptly turned off, writes Max Berry.

THE TANKER Tandara Spirit lay at anchor in Port Phillip Bay for three weeks in November, when its crew of 18 staged a sit-in rather than sailing the ship to Singapore, where they expected to be made redundant.

The crew disputed the indication from their employer, Teekay Australia, that there would be no need for their services, saying there will still be ships transporting fuel from the former Shell refinery (now owned by Viva Energy, a Shell/Vitol joint venture), near Geelong, to Adelaide and that they would be replaced by Vietnamese seafarers.

It was a dispute touching several hot button issues at once: the replacement of Australian seafarers with foreign labour paid much less (reportedly $2 an hour), unsafe vessels and working conditions, and dangers to the marine environment. But the sleeper that finally has been awakened – if only by the placards the crew displayed on the ship – is the extent of Australia’s reliance on fuel imports and the high consequences of a supply interruption.

Written large, industrial disputation is one scenario that could stop the flow of oil to Australia.

Other supply-interrupting events include accidents, natural disasters, attacks on shipping by terrorists or pirates, or damage to infrastructure from war in the Middle East. It’s a situation described by risk managers as low-risk, high-consequence, but the threat of disturbance to oil infrastructure or vessels has probably increased in likelihood since our military commitment to containing the Islamic State forces in Iraq.

Motorists group NRMA, one of the few organisations vocal on the security of our fuel supply chain, commissioned Air Vice Marshall John Blackburn (retired) to write a report on Australia’s fuel security and some interesting facts have emerged.

Australia now imports about 90 per cent of its crude oil for refining into petrol and diesel fuels at the five remaining refineries. Unlike many other countries, we do not stockpile fuel to protect the economy and civil society against a supply interruption.

Written in two parts, Blackburn’s report (part 1), Australia’s Liquid Fuel Security, released in February 2013, notes that Australia – as befits the world’s ninth largest energy producer – is a member of the International Energy Agency but is failing on a key criterion of membership: the maintenance of 90 days’ supply of oil. In fact, Australia is the only non-compliant IEA member on this measure and has the lowest oil supply of 25 countries in the organisation — 71 days. 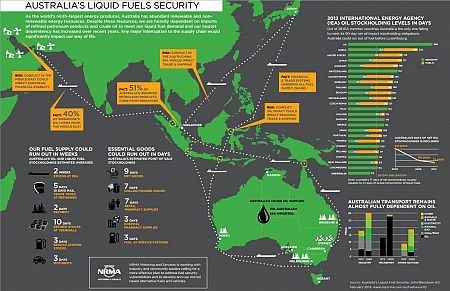 Infographic from NRMA report on Australia's fuel security. (Click here to read report as a PDF. Click on image or here to see the image full size.)

And that’s not actual consumption — the calculation is based on net imports in the previous year.

No, actual consumption is more like 23 days’ worth. Breaking that down, there’s ten days of oil supplies at refineries, ten days’ worth in the distribution chain and motorists have fuel for about three days.

It’s worth looking at how an oil supply interruption would affect stocks of other items. Pharmaceuticals in chemist shops would run out in about seven days and in hospitals in two or three days, Blackburn finds. Refrigerated and frozen foods would disappear from supermarket shelves in about a week, and packaged goods would be gone by day ten of a supply halt.

And now look at the different approaches towards oil supplies overseas. Many countries have a public stockpile – the government buys fuels and stores it – and some mandate levels of private sector holdings.

Whether it’s because of its harsh experiences with wartime and post-war shortages can be speculated, but the United Kingdom has the highest oil reserves: 268 days at October 2012.

Blackburn notes in his report:

By the time Blackburn released the second part of his report in February 2014, the nation’s dependence on imported fuel had increased to 91 per cent, while external threats had increased. Already there are implications for defence, as the former Air Force chief points out: the Navy is now completely dependent on import sources for F44, a specialised fuel for ship-based helicopters. In the event of conflict, the ownership of overseas refineries could determine whether supplies continue to flow. 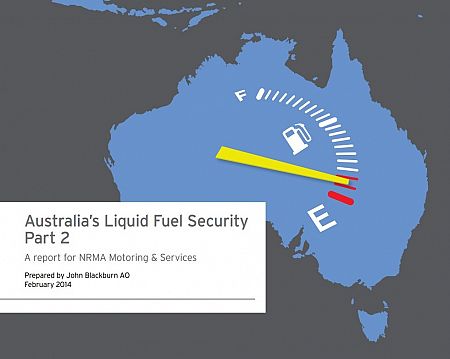 As Australia’s refining capacity shrinks, local businesses can expect to pay more for petro-chemical byproducts, such as plastics. And already we’ve had a small taste of fuel shortages: in late 2012 diesel supplies ran out in north-west Victoria – right on harvest time – following a “refinery incident”.

Blackburn suggests a target – 30 per cent of our overall oil supply – that is completely secure.

This target can be met by a combination of strategies on the demand and supply sides – fuel efficiency standards, mandatory fleet fuel targets, better public transport – but a big factor, comprising two-thirds of the target, would be Australian-sourced petroleum-alternative fuels: biofuels, gas (LPG, LNG and CNG) gas-to-liquid fuels and coal-to-liquid fuels.

If sleeping our way to almost complete dependence on imports for oil supplies wasn’t bad enough, governments have done us few favours by failing to foster alternatives to mineral oil fuels, whether other fossil-based fuels or green alternatives.

An earlier report on alternative fuels for NRMA by the Jamison Group estimated that gas-to-liquid fuels could now be meeting 10 per cent of our liquid fuel demand had governments taken the necessary steps earlier. The Jamison Group set out 12 steps to secure future transport fuel supplies but few, if any, have been adopted.

The Howard Government enthusiastically championed LNG exports to China, but there was less enthusiasm for promoting LNG’s development as a domestic transport fuel. The whole policy posture is about Australia as an energy exporter. Coal-to-liquid is a similar story of indifference. Yet LNG is ideally suited to powering heavy vehicles like trucks, buses and locomotives. If we leave it to the market, it will be too late to replace oil as an immediate alternative.

Biofuels have had an especially chequered record in Australia, characterised by small scale and high cost operations, variable quality and lack of acceptance by oil majors, fuel retailers, car manufacturers, and motorists. Mandated levels of biofuels in some states are a blunt instrument and don’t appear to have won over the public.

A misguided environmental lobby hasn’t helped either. Ever since the United States mandated an ethanol component in its overall fuel mix and farmers went on a corn-planting frenzy across the mid-west after its price soared (with a host of unintended consequences like Mexicans, who began finding their tortillas unaffordable), environmentalists have been warning that crops for fuel will compete, in the driest continent, with crops for food if Australia went down the same track.

But Australian second-generation biofuels are predominantly manufactured from byproducts or other non-food feedstocks and the food-versus-fuel argument is a false dichotomy.

Biodiesel is currently made in Australia from recycled and filtered cooking oil (usually collected from fish and chip shops) animal fat (tallow) and one plant food source — soybeans. According to CSIRO expert Dr Tom Beer, animal fat and vegetable oil feedstocks are not available in sufficient quantities to replace more than 6 per cent of mineral diesel with biodiesel even at the current low concentration blends. That, and the high price of tallow – which killed some biodiesel producers – is why the biodiesel industry’s great hope for a future feedstock is algae, which has the required fat content and grows fast. CSIRO has been working with Flinders University and the South Australian Research and Development Institute to perfect a way to grow algae in ponds for biodiesel production.

New generation ethanol, too, can be made from waste products. A consortium including GM Holden, Caltex and U.S. company Coskata planned an ethanol plant in Victoria capable of making ethanol from any waste source containing cellulose — wood chips, food scraps and used nappies would all be fair game.

Sadly, the consortium abandoned the project in a wrangle over rights to the technology, but the concept has been proved in the United States. Instead of paying to dispose of green waste, local councils would be able to sell it.

For all the benefits of a local biofuels industry in offsetting our dependence on imported oil, reducing carbon emissions, and employing people in a sunrise industry developing a renewable energy source, government support for biofuels has gone backwards. The exemption of biofuels from excise has ended and the previous 100 per cent rebate for biodiesel fell to 80 per cent. A complication is that some ethanol is imported cheaply from Brazil, but by July 2015, local and imported ethanol will attract 12.5 cents a litre excise (before indexation). Ethanol attracts the same excise level as LPG despite emitting much less greenhouse gas.

When the Abbott Government announced it would reinstate fuel excise indexation this year, it should have been a no-brainer for the Greens to display their environmental credentials by moving an amendment to exempt biofuels from indexation. That would have created an expanding price gap that would have built demand and supply for low-carbon and renewable biofuels. But there was no such amendment and there is clearly little taste for any industry measure that will be a cost to the budget.

Right now, petrol and diesel at the bowser are not only abundant but cheap, thanks to an unexpected price plunge despite conflict in the Middle East — a reverse of the traditional price response. While it lasts, that’s great for consumers, but the low oil price does nothing to promote extraction of existing fossil fuels or the development of alternatives. It simply promotes the current inaction on transport fuel security and obscures the reality of “peak oil” at some point.

When Air Vice Marshall Blackburn wrote his second report, he revealed a bureaucratic bias towards the status quo of inaction in the 2011 National Energy Security Assessment that ignored concerns by a range of agencies, including Defence:

'The people we consulted when we writing this report concluded that the 2011 NESA did not adequately address the concerns of a number of agencies outside the then Department of Resources, Energy and Tourism and that the Department didn’t employ a sufficiently diverse set of scenarios to conduct the risk analysis.'

A new Energy White Paper is due before the end of the year, so we will know soon enough if these concerns have been heeded — or instead, if the “she’ll be right” attitude remains in force.