The Lavoisier Group, Peabody Coal and the climate deniers

'REALLY DANGEROUS GLOBAL CLIMATE CHANGE — THE NEXT ICE AGE' screamed a half page advertisement on page 5, on 30 January in The Australian.

The ad was a confused jumble of fake science predicting a future ice age from increased carbon dioxide and a call for new coal fired power plants. 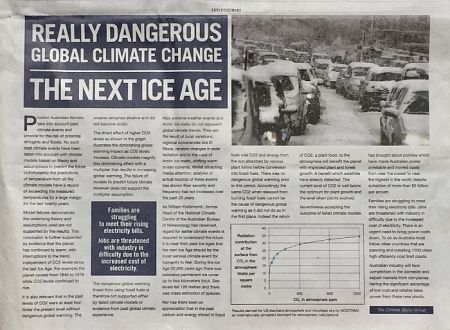 (Click on the image to read the text in full)

One highlighted piece of text reads:

'Families are struggling to meet their rising electricity bills. Jobs are threatened with industry in difficulty due to the increased cost of electricity.'

The ad concludes with the bald statement:

Nevertheless accepting the outcome of failed climate models has brought about policies which have made Australian power unreliable and moved costs from near the lowest in the world to near the highest despite subsidies of more than $3 billion per annum.

Families are struggling to meet their rising electricity bills. Jobs are threatened with industry in difficulty due to the increased cost of electricity. There is an urgent need to bring power costs down. To do so Australia much follow other countries that are planning and installing 1200 clean high efficiency coal fired plants. [No references for this statement]

Australian industry will face competition in the domestic and export markets from companies having the significant advantage of low cost and reliable base power from these new plants.

The ad is attributed to 'The Climate Study Group'.

A quick Google comes up with a connection to the Lavoisier Group.

'The Lavoisier Group is an Australian organisation formed by politicians and dominated by retired industrial businesspeople and engineers. It does not accept the science of global warming and works to influence attitudes of policy makers and politicians. The organisation downplays the risk of the effects of global warming, rejects the scientific conclusion that human activity causes it, and opposes policies designed to curtail it. Some members regard climate change as a "scam".'

The Wikipedia of spin merchants, Sourcewatch, calls the Lavoisier Group

'... a global warming skeptic organisation, based in Australia. It argues that the evidence for global warming is based on inexact science and that any policy responses, such as signing the Kyoto Protocol, would be too expensive for Australia's industry.' 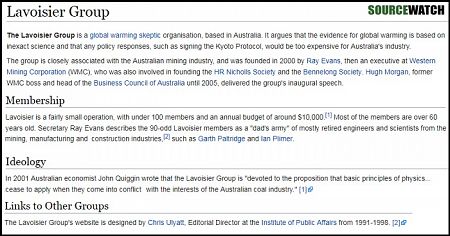 The Group was named after French scientist Antoine Lavoisier (1743-1794), the father of modern chemistry, who disproved the Phlogiston theory of combustion.

Its website is currently managed by the Bert Kelly Research Centre. It has published articles by ex-Family First Senator Bob Day and David Leyonhjelm of the Liberal Democratic and Stop the Greens Parties.

In his book Scorcher, Professor Clive Hamilton says the following arguments are made by the Lavoisier Group:

Critics of the Group have pointed out its ties to greenhouse gas emitters. The Group's top members have denied receiving compensation from industry, unlike some global warming skeptics in the United States, who have admitted to receiving funds from fossil fuel companies.

The Lavoisier Group denies receiving funding from the coal industry even though their blatently pro-coal ad might indicate otherwise. Certainly, the coal industry has a proven track record of financing climate change skeptics. The massive extent of funding came to light as an unexpected byproduct of disclosures, which became public as Peabody Energy, the world's biggest private sector coal company, was force to seek bankruptcy. The proceedings took place in the U.S. in April of 2016. Peabody was under financial pressure by competition from cheap natural gas.

The documents revealed that Peabody supported dozens of groups who were fighting environmental regulations in local, state and federal areas. Peabody also financially supported a number of contrarian scientists who have been active in obstructing U.S. and global action on climate change.

It comes as no surprise that the bankruptcy revelations are in line with Peabody's very contentious and public position on climate change. Peabody is the most extreme of the fossil fuel companies and right wing groups that sow doubt about the science and risk of climate change. Peabody's position is that rising carbon emissions are actually beneficial, not merely harmless.

The ad in The Australian includes this statement:

'Indeed, the return of CO2, a plant food, to the atmosphere will benefit the planet with improved plant and forest growth.'

Peabody would certainly agree with this curious statement.

Peabody is greatly concerned over the present Australian increase in renewables. This concern is understandable in the light of the fact Peabody is the fifth biggest coal producer in Australia.

'The company is also a leading voice in advocating for sustainable mining, energy access and clean coal technologies.'

Sounds like the ad again. And “sustainable mining” is as much an oxymoron as “military intelligence.”

Australia has become a very important component of Peabody Energy. Glenn Kellow, Peabody CEO, claims the group's Australian operation has "become a star of the reborn mining group” since it emerged from bankruptcy.

So, who funded The Australian ad? It matches Peabody's modus operandi, but who knows? However, there is a saying that if it looks like a duck, swims like a duck, and quacks like a duck, then it is probably.....