Daryl Williams discusses a recent scientific report in which the devastating global impacts of a small nuclear conflict, including "nuclear famine", are outlined.

THE COLD WAR is over, the Berlin Wall has fallen, nuclear warhead numbers have declined significantly — so the threat of nuclear catastrophe has passed, right?

In fact, things may be more dangerous today than at the height of the Cold War.

Computer simulations of the indirect climate effects of even a “small” regional nuclear exchange indicate that the whole world would still be imperiled.

A recent 16-page scientific paper, 'Multidecadal global cooling and unprecedented ozone loss following a 'regional nuclear conflict', by Mills, Toon, Lee-Taylor and Robock, outlines the horrific unexpected consequences. Once you boil down the “science-speak” it paints a bleak picture – via an "Earth system model" which includes atmospheric chemistry, ocean dynamics and interactive sea ice and land components – which we should do everything we can to avoid.

It deserves far more attention than it has received and its findings should be informing our foreign, defence and emergency management policies. In summary, the scenario it simulates is as follows:

Firestorms in India and Pakistan from a “small” regional conflict and nuclear exchange would inject 5 Tg (or one million tonnes) of black carbon (smoke, soot, dust) into the stratosphere which spreads globally.

The black carbon heats the stratosphere (by up to an amazing 80 degrees C) and cools the lower atmosphere and surface (by 1.1 degrees C in the first four years, down to 1.6 degrees in the fifth year, slowly rising to 0.25 to 0.5 degrees 20 years later). The colder surface temperatures reduce precipitation by 6% globally for the first five years and still by 4.5% one decade on.

Oh, and hundreds of millions of Indians and Pakistanis would be incinerated to death … but let's concentrate on the long-term climate repercussions. 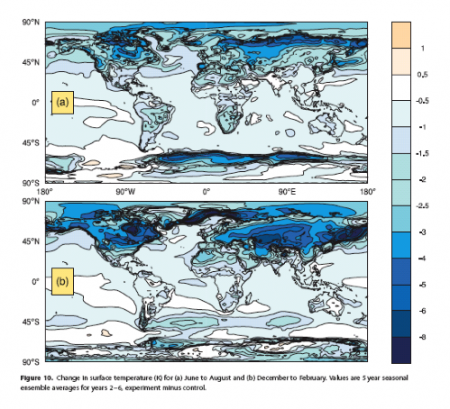 The heating of the stratosphere caused by the black carbon produces a dramatic loss of ozone (30% to 45% at mid-latitudes for the first five years, 50 to 60% at northern high latitudes) giving 'a global ozone loss on a scale never observed'.

That spells big trouble for Earth in the form of

As well, '… the average growing season is reduced by up to 40 days throughout the world's agricultural zones over these five years'. The increased UV-B radiation would reduce plant height, shoot mass and foliage area, damage DNA and significantly increase insect losses. A 16% loss of ozone could reduce phytolankton levels in the ocean by 15%, resulting in a loss of seven million tons of fish per year.

Change in frost-free growing season in days for (a) January to December in the Northern Hemisphere and (b) July to June in the Southern Hemisphere. Values are 5 year seasonal ensemble averages for years 2–6, experiment minus control. (Source: onlinelibrary.wiley.com/doi/10.1002/2013EF000205/full.)

And yet, I didn't read anything about this in the 2016 Defence White Paper or in any plans by Emergency Management Australia. Why not?

The above effects are globally averaged figures. Regional extremes can be worse. Large areas of continental landmasses would experience significantly greater cooling than average:

Which is worse than any volcanic winter in the last 1000 years. There would be significant regional drying over the Asian Monsoon region, including the Middle East, the Indian subcontinent and Southeast Asia, as well as the Amazon, the American South-East and Western Australia — which would be 20% to 60% drier.

All from a “minor” nuclear exchange  between India and Pakistan. Amazing, no?

Given the consequences found and the quality of the work (state-of-art climate model with stratospheric chemistry included) it is hard to understand why governments, the media and most of all, the public ignored its findings.

The report gives no estimates of death tolls but suggests they would be huge.

' ... the number of people potentially threatened by [nuclear] famine at well over two billion.'

And this may be conservative, as possible cascading effects from social breakdown, disorder, military actions, migration upheavals don't seem to have been considered. 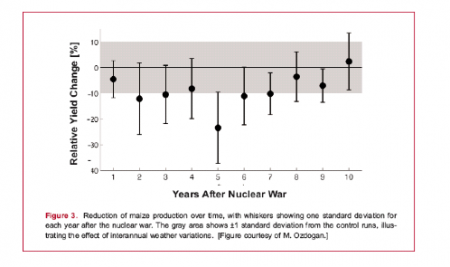 In terms of probability (one in 100 year chance?) times impact (hundreds of millions dead, collapsed world economy, radioactive fallout), this problem dwarfs all other natural and man-made disasters.

Sadly, public awareness of nuclear famine seems minimal. The handful of videos on YouTube on the subject have very few views. For instance, the video Nuclear Famine by Nuclear Age Peace Foundation has had only 8490 views while Nuclear Famine – a Billion People at Risk by Physicians for Social Responsibility has had only 314 views … over three years!

We need to be more aware and if enough people make the effort, perhaps we can put these serious problems on the map and hopefully progress towards a nuclear-famine-free world.

"The Stone Age may return on the gleaming wings of science, and what might now shower immeasurable blessings upon mankind may even bring about its total destruction. Beware, I say: time may be short."

17 April 2016, 1:00pm Daryl Williams discusses a recent scientific report in which the devastating ...