Failure to plan for an inevitable catastrophic eruption could see unimaginable suffering on an unprecedented scale. It would dwarf the horrors of the Holocaust, World Wars 1 and 2 and various genocides. Daryl Williams reports.

WE HAVE no idea what it would be like to watch hundreds of millions of people unavoidably starving to death before our eyes.

Yet that could be the consequence of a VEI 7 or VEI 8 volcanic eruption today.

It has happened before.

In 536 AD, the sun dimmed around the world. Temperatures dropped, crops failed. There was famine, food riots and social upheaval. 25 per cent of Europeans and 75 per cent of northern Chinese died from the after-effects.

‘...the Sun became dark and the darkness lasted for 18 months...’ (Michael the Syrian)

The cause was a volcanic eruption in El Salvador (Ilopango) that injected 300 mega-tonnes of sulfuric gases into the stratosphere. The gases reflected sunlight back into space causing temperatures to drop. A similar event in Indonesia (Tambora) gave us The Year without Summer (1816). Again, there were frosts in summer, failed crops, starvation.

The Number Of Volcanic Eruptions Is Increasing And That Could Lead To An Extremely Cold Winter https://t.co/HkZ5VYRi4i

Another eruption, (Kuwae, Vanuatu 1452), is suggested by some to be the trigger of the Little Ice Age. In the spring of 1453 ‘non-stop snow damaged wheat crops’ according to Ming Dynasty records. The Yellow Sea became ice-bound out to 20 kilometres from shore. Tree rings of U.S. bristlecone pines show frost damage from this period as do tree rings from Europe and China.

Unfortunately, larger eruptions are possible. Seventy-five thousand years ago, a VEI 8 eruption (Toba, Indonesia) almost caused the extinction of proto-humans on Earth. We still carry the effect of this in our DNA in the so-called “genetic bottleneck”.

So how would we fare from a VEI 7 or VEI 8 eruption today? The answer could be: Not so good.

Reduced sunlight and subsequent decline in rainfall would affect food supplies. By how much? I don't exactly know. It depends on where, when and how much is injected into the stratosphere. A ten per cent decline in food production would probably be survivable by switching to alternatives (wild and domestic animals, etc). But above that we may be in trouble.

Roughly speaking, 70 million could unavoidably starve for every one per cent drop in production below food sufficiency. So a 20 percent decline might mean 700 million could starve to death. Not a nice thought. And this assumes there is no social breakdown or disruption to supply chains — both highly probable.

Of course, VEI 7 and VEI 8 eruptions are rare. But not too rare. The probability of a VEI 7 eruption is roughly around 1 in 1000 years. Pretty good odds. But over 100 years, that's a 1 in 10 chance. Not so good odds. The European Science Foundation produced a report (Extreme Geohazards) which gave a similar estimate.

Add the risk of nuclear winter (1 in 200 years?) which could produce similar effects (plus radioactivity) and the risk of a global winter rises to about one in two over 100 years. Yes, a 50 per cent chance of watching hundreds of millions (or more?) starve to death. Lovely thought, no? 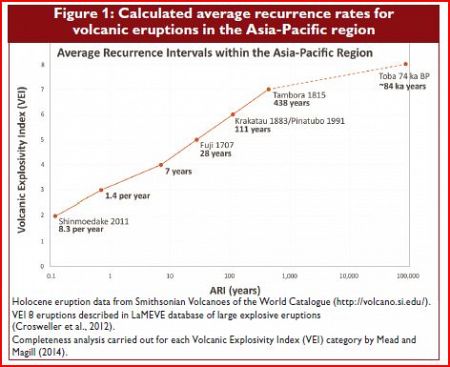 So, what is being done to address this threat? The short answer is: almost nothing. It is barely on the radar.

GeoSciences Australia  surprisingly ignores it in their hazard assessments. Its library (the N H “Doc” Fisher Library) has only 1 book on the subject (from 1998).

Other countries are the same. Singapore, which could disappear as a nation if we had a repeat of the 1815 Tambora eruption, is apparently ignorant of the risk. Its Civil Defence Force makes no reference to it.

So, what could be done?

Public awareness might help, particularly to our neighbours in the north.

We could increase world food production by ten per cent for just four years and stockpile the excess. This would provide a revolving stockpile that could feed 1.4 billion for two years. The EU once had butter mountains, wine lakes — why not some grain mountains strategically placed around the world? This would also be helpful during other disasters like Coronal Mass Ejections and war.

People might contribute by stockpiling some food themselves which could be useful in other types of emergency. Even storing just one per cent of annual production could save 70 million from starving should a VEI 7 eruption occur.

Various government agencies could develop contingency plans to stop potential social breakdown, secure borders, and stop black marketeering and so on. Assessments could be made on whether agricultural systems could be shifted 800 kilometers north at short notice (one month?) then gradually shift back. Could fibre production be suddenly switched to food at the drop of a hat? What inputs would be needed? What laws/regulations? What about rapid scaling up of indoor cultivation?

We would only have weeks to implement these changes. Wait too long, miss the narrow window of opportunity and millions more starve.

We could also phase out nuclear weapons completely. That would turn a one in 200 year risk back to a one in 350 to 1000 year one. If they are ever used, the whole world will lose. There is no strategic or rational reason for having them. Time to redirect those resources to sensible use.

We have not had a VEI7/8 eruption since 1815. Since then, world population has gone from 1 billion to 7 billion. We are now much less self-reliant, much more dependent on just-in-time supply chains.

Failure to plan for an inevitable catastrophic eruption could see unimaginable suffering on an unprecedented scale. It would dwarf the horrors of the Holocaust, World Wars 1/2 and various genocides.

This problem deserves much more attention than it is currently receiving.

17 April 2016, 1:00pm Daryl Williams discusses a recent scientific report in which the devastating ...