THERE IS LITTLE WE CAN DO at this time about climate change deniers like Rupert Murdoch and Tony Abbott.

They are both barmy, firing off comments on issues they clearly know nothing about.

Global warming is happening and if there are people who do not accept this fact then too bad. There is little anyone can do about people who are just too dumb to spend an hour or so of their time reading the links in this paragraph, all of which set out the facts clearly and simply.

I remember speaking to one of my younger daughters one day about the world being round.

She said, precociously, pointing out the window to the sea:

“Anyway, if it was round all that water would fall off.”

The word that Rupert Murdoch uses more frequently than any other is “bullshit!” He uses it several times a day.

How do you speak sense to an old man who is grappling with senility, doesn't read books, doesn’t know how to use a computer and only quotes the headlines from his own newspapers.

Tony Abbott is a different kind of creature.

I don’t know him as well as I got to know Murdoch. He claims to have had an education in theology, which always has a negative effect on reality.

Tony is our prime minister — but that doesn’t register his level of intelligence. It is rare indeed to find any prime minister or politician who talks sense about anything.

I recently read an article in Media Matters, in which Tony Abbott is quoted as saying global warming is “absolute crap”.

That is another way of saying “bullshit”.

In the same article, Rupert Murdoch says much the same thing.

'Murdoch's anti-climate change crusade in Australia certainly mirrors his company's commitment to misinformation in America, and highlights the dangers of having news media moguls who are dedicated to propaganda efforts regarding pressing public policy issues. Indeed, Murdoch's media properties in Australia have been shown repeatedly to be wildly unfair and unbalanced when it comes to the topic of climate change.'

What that means, more simply, is that Rupert thinks global warming is “bullshit!"

And with the PM and the dictatorial owner of most of Australia's media both deny reality and work to stop action on the most pressing issue facing the world — Australians have a problem.

If only we could find a way to remove their influence and power and be rid of them.

How Tony Abbott got sucked in by Rupert Murdoch - the world's most notorious climate change ignoramus: http://t.co/NvFAJbaPpx 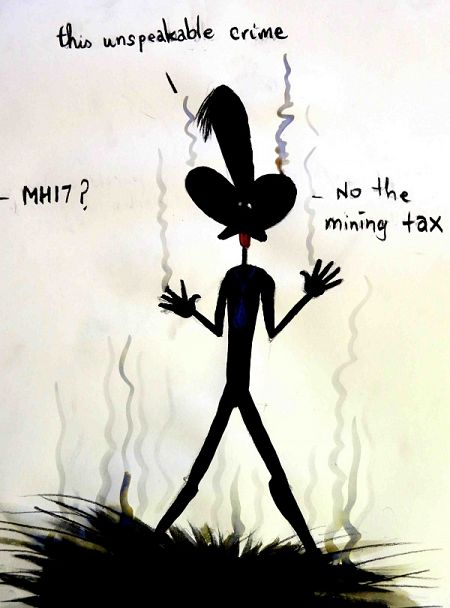