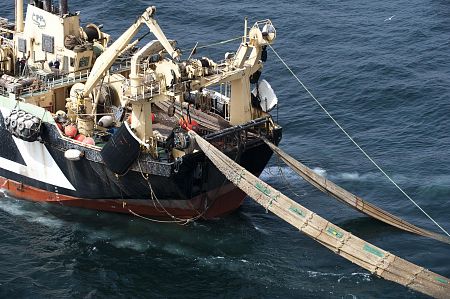 A huge factory fishing trawler, the FV Margiris, is steaming towards Australian fishing waters amid mounting controversy about the prospect of it depleting Australian fish stocks and damaging marine ecology.

Waters where the super-trawler may be permitted to fish are home to some of Australia’s unique and most vulnerable marine wildlife.

The 142-metre long FV Margiris, due to arrive in August, is destined to become part of the Australian fishing fleet unless the government decided to accede to community concerns and reject the trawler’s application to operate.

The Margiris is part of a heavily subsidized European trawler fleet, is on its way to Australia after allegations of overfishing stocks in the South Pacific and off West Africa. Greenpeace has confronted the Margiris twice this year, in a campaign to stem the overfishing of African waters by foreign trawlers and to pressure the EU to cut its fleet overcapacity.

Seafish Tasmania has proposed a joint venture with the Dutch owners of the vessel. They plan to catch 18,000 tonnes of small pelagic fish (also known as bait fish) for freezing into 20kg blocks and exporting to Nigeria for $1/kg for human consumption.

And because of a Federal Government loophole, the Margiris may be able to fish in areas usually designated for the protection of fish stocks, such as marine reserves south of Tasmania. According to recent reports, Commonwealth environment laws ban deepwater trawling in the Huon and Tasman Fracture Marine Reserves, but because the reserves are designated "multiple use zones", mid-water trawling is, in fact, allowed.

The government regulator, the Australian Fisheries Management Authority (AFMA), has received substantial criticism, including from Independent MP Andrew Wilkie, for the way it has set the fish quotas and other aspects of its management.

Ramping up the pressure, fourteen state and national environment groups* – including WWF Australia, Greenpeace, The Australian Conservation Federation and the Wilderness Society – announced on Tuesday the national launch of the ‘Stop the Super Trawler’ campaign.

“This campaign has been launched to stop the introduction of the Margiris and other super trawlers in Australian waters after thousands of people have raised concerns,” said Rebecca Hubbard, marine coordinator from Environment Tasmania (a member of the alliance).

“So far the Federal Fisheries Minister Joe Ludwig’s response to these concerns has been deafening silence,” she said.


“AFMA has failed to offer any effective strategies to address this critical issue, so our organisations had no choice but to elevate our campaign. Basic scientific information about the fish stocks is lacking, such as fish movements and how long it would take for populations to recover from overfishing. This super trawler could spell disaster for the fish they are targeting and others in the food chain.”


“The Margiris poses an unacceptable threat to our marine wildlife, which are supposed to be protected under Australian law. Devices designed to protect Australian fur seals and dolphins getting trapped in these huge nets could be operating as dead animal disposal devices — simply ejecting the animals after they have been killed.”

“At the recent Rio Summit the Australian Government committed to solving the global overfishing crisis that is being caused in part by massive ships like the Margiris catching too many fish," said Nathaniel Pelle, Greenpeace Oceans Campaigner.


“Yet now we are undermining these efforts by welcoming this monster ship with open arms. Make no mistake, allowing the Magiris into Australia would create a precedent that Australian waters are open to exploitation by super trawlers."

The alliance said they were also working with recreational fishing groups on this issue.

(For more details on the campaign, visit the dedicated website: www.stopthetrawler.net. A petition calling on the Australian Government to reject allowing the FV Margiris to fish in Australian waters, hosted by the Australian organisation Community Run, has been signed by nearly 23,000 people, and can be viewed here: http://www.communityrun.org/petitions/stop-giant-fishing-trawler-in-tasmania.)